The Informalities of Formalities, and a Review of Thunderstone: Dragonspire 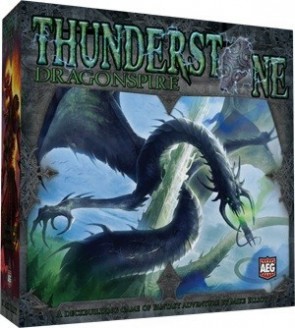 Game Name
Thunderstone: Dragonspire
Publisher
AEG
There Will Be Games

Sorry for the long title, folks...it's a shorter edition today, talking about changes to come in the formats of my reviews and articles, oh, and a short review of Thuderstone: Dragonspire.  Short, because the review by Drake's dad was awesome.

Time may change me, but you can't trace time

Fact is, I think a change in my article formats are waaaay overdue.  I've fallen into a rut of very clinical, highly structured reviews.  The problem with this is that I've come to feel very cold about that format, and it's easy for the emotion to get lost in the structure.  It's like taking an outline and marking off bullet points--soon, you look as bored as the dude on the cover of Power Grid.

I'm not bored with gaming by a long shot.  In fact, I'm not certain I've enjoyed gaming any more than I am right now.  I am getting to play lots of games with lots of different folks (my lovely wife included), so I'm pretty sure that I'm also getting to game far more often than ever, or at least since high school.

What this creates is a bottleneck of wanting to talk more about games that I've tried, or my short thoughts on them, without committing them into the stone of "THE OFFICIAL REVIEW."  So I save those thoughts and opinions, but then they grow cold from disuse.

Also, some of the stuff I'm enjoying is hard to cover in my "one main event game per week" format of the past.  I'll give you a perfect example:  Pickomino.  It's a game with a completely childish cover and theme, rolling dice to catch worms off a grill.  It's a Knizia dice-off, and the thing is, it's addictive as hell.  Plays quickly, supports large groups, appeals to families and co-workers immediately.

See?  That covers the lion's share about what I'd want to say about a game like Pickomino.  Yeah, I could say a little more, but you'd never see an entire review on the game.  It's too light, too trivial to talk about for more than a couple of minutes.  But it also happens to be the light push-your-luck dicefest I've been looking for.

"So post it in the forums, goofball!" I can hear you proclaiming.  Well, if I did that, what would I fill my weekly slot with?  With Drake making all the quality dick jokes and Pete Ruth warding off invaders at early hours, I pretty much have to go with, y'know, talking about games.

I did a few Review round-ups not long ago and they felt like such a breeze to write.  No psyching myself up, no ticking off a review format, just talking, dishing dirt about some games I'd played recently.  I did more than one, and I worried that maybe folks didn't see that sort of article as passing "official" Fortress: AT snuff--we like meaty games, so why would we settle for anythying less than meaty reviews?

Fact is, you'll still see big reviews from me.  But instead of forcing the issue week in and week out, I'm going to save full, focused review articles for games I feel strongly about--positive or negative.  I think if I save the big "main event" reviews for stuff like that, I can get some of my zing back in terms of not checking off the boxes on just another weekly review.

It's weird...at one point, I was pretty burned out on games, and I struggled to write stuff from week to week.  Now, I'm so involved in the hobby, that I find my old way of doing things isn't handling the load very well.  Let's just roll with things and see how they go.

Your voice was the soundtrack of my summer, do you know you're unlike any other? 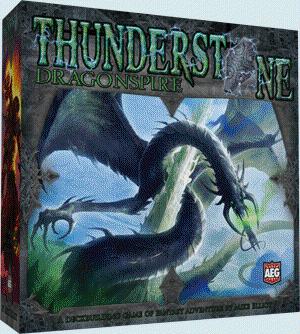 Look, let's face facts--I'm not topping Pa Drake's review of Thunderstone: Dragonspire, especially not this soon.  But I have gotten to play it recently and I did want to talk about it, particularly since it is fresh off the presses.

AEG has really put the full bore expansion treatment to Thunderstone, and while I'm wary of such things usually, in this case it's obvious they have a plan and continue to amaze me with the level they put into getting the production elements right.

Thunderstone: Dragonspire is the first standalone set since the base game, and if you're used to opening the expansions as of late, you'll be surprised at just how much they've crammed into this box.  A wealth of new and interesting heroes, new treasures, tons of cards, new experience point chips to replace the awkward cards from the first game, all new randomizer cards, a dungeon board, and hey, what the hell, let's make the MSRP cheaper than the original while we're at it.

I dig the new mix of heroes.  My favorite I think is the Veteran stack, who we've dubbed the Spinal Tap of heroes.  Why, you ask?  Because he goes to level FOUR ("It's one higher than 3, innit?")  He is one serious ass-kicker to boot, and as long as he has a decent weapon in the mix, he is going to see a lot of action.

I think the best thing they added from before was the Mercenaries, and Dragonspire continues with some nice flexible mercs to add to the mix.  Specialized village cards were often neglected before because they rarely came up on the turn you needed them, but using mercenaries allows you to gain a (usually smaller) benefit but workable for either the village or the dungeon.

The settings cards are pretty much the only really new addition, and these are game-affecting conditions that stay out and change some of the basic rules of the game.  They're like the old Enchant World cards from Magic: The Gathering, usually less powerful, though sometimes quite annoying (like the one that keeps you from counting your monster trophies for gold...WTF?!?!)

The dungeon board is nice but completely unnecessary, though I like having it all the same and will probably always use it unless space is tight, just because it gives structure to the table.  I realize some will get really excited hearing there's a dungeon board, but there is no new mechanic for it...it simply holds the dungeon deck, has a spot for each rank of monster (including Rank 0 for Guardians), and a nice reminder for the light/attack penalties for each square.  This should help new players quite a bit as light is by far the most confusing thing about the game, but like I said the board is nice, mounted, looks decent and keeps the dungeon organized, which is nice.

True to form of the previous two expansions, the box for Dragonspire will hold all cards to date.  My brother has referred to 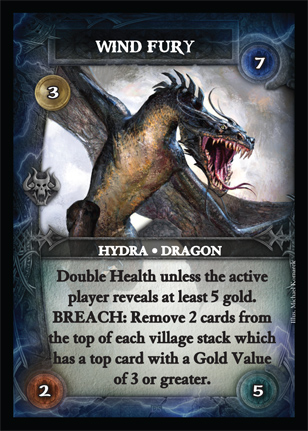 Thunderstone as The Russian Doll Game, and by the time the tenth expansion comes out, it will be a coffin-sized box with four small packs of cards and an assload of foam spacers.  Still, it's a very nice touch.  The box is freaking heavy as hell with all those cards in there!  I wonder what's next though, as the box is fairly full with all expansions inside.

The only small thing I don't like about the new box is that they used the ridged bottoms for the inside instead of the smooth box inserts for Wrath of the Elements and Doomgate Legion.  I'm not sure why, as the cards don't really fit in the ridges or anything, and they don't keep cards from toppling over if you need to remove a chunk of them to have a look.  (The plus side of this new box is that I have two extremely awesome Thunderstone expansion boxes to use for keeping cards for other games in.  This is much sweeter than you know as these boxes are quality stuff.)

Humorously, I'm wondering if a copy of Thunderstone in its original base game box will be worth a fortune someday, as I'm pretty sure as useless as it is, and as awesome as the expansion boxes are, more than one gamer has tossed out the original box.

The only last word I'll add here is that while there is now a HUGE variety of cards, based on the specialization of certain heroes or monsters, there remains a good possibility of getting a bad or weird mix of village cards.  It's definitely to the point where you'll either want to choose the village cards yourself or use some sort of intelligent randomizer (there are at least a couple online already, just look to the Boardgamegeek forums for more details.)  I personally like to completely randomize the heroes, then choose at least one village card for each of them.  Like, a heavy weapon for a beefy fighter, or a bow for the archers, or a wizard/cleric item for those guys, or food for characters that interact with that.  Then make sure there's at least one source of Magic Attack, and randomize the rest of the cards.  That's my method, but the cool part is, it's flexible enough that you can pick your cards however you like.  Just understand that because of the dependencies of some cards, the  possibility of a bad mix is there.

If you're a fan of Thunderstone, this is more good stuff and you'll want to pick it up, just for the new cards, the experience point chips, and the box to keep all your cards in.  If you haven't taken the plunge, and are wondering between the original base game or this one, there is no contest--Dragonspire is where you'll want to start.  If you haven't been sold on the whole Thunderstone thing yet, or tried it and didn't like it, Dragonspire is excellent but I'm not sure it will change your mind.  For me, this is second only to Puzzle Strike in terms of my favorite deckbuilding games.

That's a wrap, folks.  Next week I'll talk about Nightfall, Dungeonquest 3rd Edition, and my thoughts on fillers.  And if I'm committing to a new format, I'll have to come up with a clever column title at some point.  See ya in seven.

Ken is a member of the Fortress: Ameritrash staff. Click here for more board game articles by Ken.