Not a Patch on You - Patchwork Board Game Review

A Game of Thrones LCG - an overview 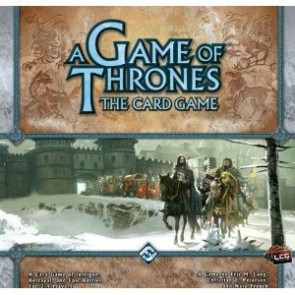 Game Name
A Game of Thrones: The Card Game
Publisher
Fantasy Flight Games
There Will Be Games

After Matt Drake's Warhammer: Invasion review and Dragonstout's Magic primer, I figured I should pimp my favorite card game: A Game of Thrones, FFG's flagship Living Card Game (or LCG).

A Game of Thrones (or AGoT) was originally a conventional CCG like Magic, but later became FFG's first foray into an LCG. In the LCG format, each card pack has a fixed set of cards instead of a random one, and chapter packs (as boosters are called) are released on a more-or-less monthly basis. To date, there are five series of chapter packs with six packs each, four "deluxe" boxed expansions, and the core set. Total cost (MSRP) for one of every product is $490, though you certainly don't need one of everything and you might want more than one of some others.

The basis of the game is FFG's favorite new term, the Core Set. It's $40 and has four preconstructed decks of 45 cards each, the rulebook, and a cute little board and miniatures that are used when playing with more than 2 people. Like Warhammer: Invasion, you can just buy the Core Set and be done with it; unlike Warhammer, the precon decks are a little boring and you'll quickly find yourself wanting at least a few more cards to round out the game.

Each of the four boxed expansions is a little different. Two of them - Kings of the Sea and Princes of the Sun - each add another faction to the game (Greyjoy and Martell, for you Martin fans). The other two - Kings of the Storm and Lords of the North - expand on existing factions (Baratheon and Stark, respectively).

The chapter packs are arranged into "cycles" of six packs each, with each cycle having some sort of unifying thematic and mechanical concept. For example, the Time of Ravens cycle focuses on a "seasons" mechanic, where players can make it "winter" or "summer," which is both thematic and game-changing. For the first four cycles, the packs were 40 cards each, with some cards being 1 per pack and others being 3 per pack. The last cycle (and all others going forward) has 3 of each card for a total of 60 cards per pack.

I'm not going to break down the entire rulebook here; as with all FFG products, it's available on their site, along with the official FAQ. Instead, I'm going to highlight three of the mechanics that I think make the game kick ass.

The first is the plot deck. The plot deck is a separate deck that contains seven cards; each turn, each player chooses one of his plot cards and reveals it. Your plot card determines your income, initiative, and claim value (which determines how much damage you inflict during challenges, to be discussed later) for that turn, in addition to having some other game effect. Once a plot card is used, you cannot use it again until you have cycled through all seven of your plots (if the game lasts that long, which it often doesn't).

Obviously, selecting your plot cards is a crucial part of deckbuilding because they need to provide enough income to play your cards, as well as have the effects that you need to further your strategy (or interfere with the opponent's). Choosing plot cards during the game is also crucial, as timing is everything. In fact, choosing plots in a tight game is a great expression of David Sirlin's "yomi" concept, and adds yet another fateful decision to a game that's full of them.

The second mechanic I'll discuss is the draw cap. Each turn, during the aptly named Draw Phase, each player draws two cards from his or her deck. Other game effects may allow a player to draw more cards, but you can never draw more than three additional cards (above the two you get in the Draw Phase). This keeps the lid on weird builds that cycle through the entire deck in a turn (as mentioned in Dragonstout's recent Magic article) and puts the focus on tactical play and making the most of the cards in hand.

The third mechanic that makes the game great is the Challenges phase. Challenges are the combat mechanic in the game, and the procedure is broadly similar to that of Magic (attackers vs. defenders, count up numerical strength, higher number wins, ties break to attacker). Unlike Magic, however, there are three types of challenges: military, intrigue, and power. Military challenges kill the defender's characters. Intrigue challenges remove cards from the defender's hand. Power challenges take power tokens from the defender's total and add it to the attacker's. (Accumulating power tokens - typically 15 - is the win condition in this game, but there are other ways to get them besides the power challenge.)

The challenges phase is fraught with decisions, because not every character has every icon (unlike George pictured here), and only characters with the appropriate icon can participate in that type of challenge. Additionally, defenders as well as attackers must be tapped (or knelt, as this game calls it), which means that if you play second during the turn, you may choose to take some hits in order to preserve your ability to strike back.

The diversity of challenges means that there are many ways to win. You might focus on the military challenge, killing opponents' characters so they can't do anything. The intrigue challenge strips the opponent of cards, which can be crippling given the aforementioned draw cap. Focus on the power challenge leads to a "rush" strategy that can result in a quick win.

This game has the most airtight rules system of any I've played. The official FAQ breaks down the game in such lawyer-like detail that there's virtually no room for argument during a game; in my few months playing, I've never seen anyone even get mildly cranky about a rules interpretation. There are a few vague spots, as is inevitable with a game like this, but none that are game-breaking.

The playerbase is exceptionally mature and friendly. No kids play this game. Everyone I've met playing the game - and on FFG's forums - has been a decent guy. The douchebag factor is extremely low.

There's a print-and-play sample of the game on FFG's site, and there's also unofficial (but semi-sanctioned) online play through the OCTGN program.

I wish there was more promotion for the game. It's hardly advertised, the league play seems largely unsupported, and there's no new player outreach of any kind. It's a hard game to get into, but great once you do.

If you've enjoyed Magic and are a fan of George R.R. Martin's novels, you're almost sure to like AGoT. If you don't like his books or haven't read them, though, you can still enjoy the game for what it is: a tightly constructed, affordable, brain-burner of a card game.