The Target: Shoot to Thrill 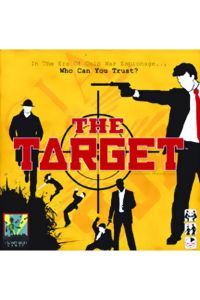 Thrill is  an overstatement.  How about “Target: Shoot to have a lot of fun pretending to be a spy.”  I dunno- it just doesn’t have the same ring.

I love the espionage genre, but in general, I am not a big fan of espionage games. Invariably these games usually focus on deduction and ignore the other parts of espionage like spycraft,  wetwork,  and intelligence gathering. The Target gives you a full on espionage experience while preserving the key element of deduction.

In “the Target” the players each try to plant evidence in their headquarters while hindering their opponents.  Everyone is either   CIA ,  KGB , or a Double agent.

Each turn a player marker moves to the next person (or base) and everyone places a card face down there.  The cards are shuffled and revealed and resolved. There are four types of cards: Rookie, Surveillance, Operative, and intelligence.  Early in the game everyone starts with rookie cards which are universally helpful but as players accumulate sets they begin to draw from the other decks that are full of nasty tricks and defenses to said tricks.

The rookie deck is a list of skills that come in three suites that correspond to the other decks. If you can meld three cards of the same suite at any time, then you can pull from the other deck of that color. Melding three languages (Flags) will also give you a one time draw from anything.  The correct combination of skills can also avoid being shot, stabbed, spied upon ect…

Surveillance helps you deduce the identities of the other players by making them show you which cards they play.  There are also cards protect you from surveillance

Operative helps you destroy evidence by bombing it or kill other agents (with their old agent dead they may only draw from the rookie deck.) There are also cards that protect you from operations.

Initially everything is foggy as people begin to figure who is KGB/CIA/Doubl e Agent and everyone tries to meld cards just to give themselves options.  As soon as a few surveillance cards pop up, it starts to get nasty.  I usually shoot my friends once just on the matter of principle - I'm just that kind of guy.  Half way through the game, people have started figuring out sides and the cardplay becomes strategic. If you’re lucky, your teammate will play a “miss” card on you to help you avoid attacks or perhaps will feed you a scoring card for the upcoming round. If you’re not so lucky – BOOM! Back to drawing from the rookie deck.  You also have  to carefully consider what cards you refill your hand with as you  deduce the factions in the upcoming order of play. When play passes to a base, cards are played face down as well and hopefully you’ll be able to get some Intell smuggled in (You need A, B , and C .)  More likely your cagey enemies will shift the stack to the player on your right or left or plant a bomb.  The first game is a bit rocky as people start to understand the capabilities of each of the decks but when it gels you see some really masterful plays as people outguess their opponents and use smart combinations of cards.

The components of the game consist of four decks of cards, some card holders, your identities,  and some sleeves for your identity.  The sleeves are a bit too translucent to do their job well but if you’re careful you can make sure your identity is properly concealed when you need to flash the top portion of it. I love the silhouettes and graphic design of the cards.  They remind me of the silhouettes at the beginning of the James Bond movies. Game play can run a bit long (1 ½ -2 hours for large groups) but there is never a time when you are not engaged.  You have to watch the cards carefully to deduce who your fellow agents are and who might be a double agent or enemy agent.  I have very few games that play this many people and I would say the game is best with  8-12 players.

The game has the deduction element of werewolf but with the ability to use cards to influence the outcome of the game. There is no player elimination but you can certainly be set back by being assassinated and be relatively ineffectual for a few rounds.  My hat is off to the Knudsom Brothers for creating a fun social game that really captures the spy theme well.  Thanks! I thoroughly enjoy your game.