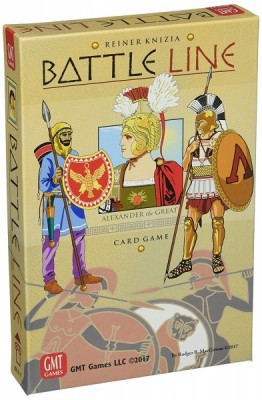 Like all walks of life, gaming is invariably filled with nuggets of received wisdom that old hands can pass down to newcomers with a nod and a wink and a feeling that they’ve done a good deed to help a young ‘un on his journey of discovery. One such pearl of knowledge is that Lost Cities is absolutely the best two-player game that a gamer can play with non-gamer, most specifically a non-gaming spouse. And since most gamers would love nothing more than to spend more time gaming and are unfortunately hitched to someone who, in spite of their considerable merits, isn’t terribly interested in games this is a particularly important piece of information. It is therefore a great shame that it’s actually false. The best game you can play with your spouse - indeed one of the best games two people with a short time window can enjoy - is a close relative of Lost Cities called Battle Line.

Don’t let the warfare theme fool you, even though this is actually published by GMT, a specialist war game publisher. Like most eurogames, Battle Line is an abstract which sits uncomfortably beneath a thin veneer of theme which could easily be thrown off. In this case there’s actual proof - one fan has made a custom deck for the game themed around The Simpsons. So you don’t need to worry that your friends and family will suddenly label you as a psychopath the minute you pull this game out and invite them to play.

The premise is delightfully simple. Shuffle a deck of six coloured suits containing the numbers 1-10 and place a row of nine pawns across the table between you and your opponent. Then take turns laying down a single card - just one, mind - from your hand in front of one pawn, and then drawing another, attempting to slowly build up sets of three cards on your side of the line that will beat whatever your opponent builds up on the same pawn on the opposite side. The winning side is determined in poker style: sequential numbers in the same colour is best, then a set of three of the same number in different colours, then any three from the same colour, then three sequential numbers from different colours, then any three unmatched cards. In the event of a tie, highest total card values win. First to win five pawns, or three adjacent pawns wins. And that’s pretty much it.

Except that it isn’t. That absurdly simple set of rules hides a wide ocean of absolute agony as you desperately try to make the best of your hand whilst attempting to hide your intentions from your opponent. Start to put down your strongest set of cards too early and your opponent will know where to put his big guns in response. Start to throw out your dross too early and your opponent will know where he can safely deploy his weakest sets and still win. Wrongly guess the chance of your getting a good set of three cards from likely-looking pairs you’re holding and you’ll be left with a half-played formation that will win precisely nothing. Put absolutely anything in the wrong place and you’ll be on the receiving end of a very short game with your opponent winning with three adjacent pawns. The game strikes a fantastic balance between the subtleties of timing, the demands of strategic planning and the sledgehammer of the random draw and is totally and utterly compelling for the entire length of its 20 minute play time.

There’s also one small oddity that you need to consider in terms of the basic rules, which is that you’re allowed to claim a win on a pawn as soon as you can demonstrate that it’s impossible for your opponent to win it. This sounds complex, especially to the non gamer but it’s easy to explain by an example: if you’ve laid down 1-2-3 of blue against a pawn and your opponent has 5-6 of orange on the other side then as soon as you see both the 4 and 7 of orange elsewhere on the table you know your opponent cannot complete the set he’s aiming for and so you’ve won. This is important because it adds yet another layer of timing and strategy to the game: when you lay a single card down you’re not really committed to a particular formation, but as soon as you lay the second card then you’re showing what formation you’re trying to build and opening up the possibility that your opponents can “bust” you by pointing out your formation is impossible.

Now, what I’ve described is pretty close to what the rules label as the “basic” game: it really is that simple. But being a gamer you’ll already have read those rules and be in to the “advanced” game at which point you’ll probably do a double take. Because the difference between “basic” and “advanced” in these rules isn’t so far from the step up in complexity between 1+1 and 1+2. You’ll wonder why the hell they bothered putting in a step-up in complexity when both sets of rules are equally easy to understand. The answer is that it makes it very easy to teach to non-gamers which is, alongside the simple victory conditions and lack of a trademark Reiner Knizia byzantine end-game scoring round, one of the many reasons it’s more suitable for family play than Lost Cities as well as a being a whole lot more fun.

So yeah, those “advanced” rules. The first is to add in a second deck of cards called tactics cards. It’s a very small deck indeed and consists of cards that allow you to break the rules of the game in fundamental ways. There are hugely useful wild cards for you to add to your formations, for example, or another that allows you to force the fight over a particular pawn to use four cards rather than three. You’re never allowed to draw more of these than your opponent: once you’ve drawn one you have to wait for the other side to draw one before you can have another and they add yet another dimension to the what to play and when to play it conundrums that the game endlessly lays in front of you, as well as forcing you to make similar style decisions about card drawing as well as a card playing. In short, they’re totally worth including. The corollary of this is the other “advanced” rule which states that you can’t claim a pawn until a turn after you’ve won it. Yes, again, really that simple. This is just to give your opponent a chance to lay a last-minute tactics card to change the outcome. Some people don’t like to play with the tactics cards because of the random element - there’s a small but significant chance that if you draw from the tactics deck you’ll end up with something that’s no use to the formations you’re developing. They’re probably the same people who want to take the dice out of Settlers of Catan. Ignore them - the tactics cards adds too much extra excitement, flavour and most importantly of all, tactical creativity to ignore. So once you’ve spent the one game required to master those “basic” rules, there’s no excuse not to move on to the advanced ones.

There’s not much else to say about Battle Line. The only flaw it has is the fact that as a lightweight 2-player only card game, it’s not in a category of games that I tend to particularly enjoy or find opportunities to play, but really that’s more of a flaw with me than it is with the game. If you like quick 2-player games and/or play a lot of quick 2-player games then you just won’t do any better than this, in my opinion. And as a bonus if you don’t believe me, and prefer to stick to that sorry old saw about Lost Cities being the 2-player game of choice then you can actually use your Battle Line deck as a lower art quality variant to play the former with. So get Battle Line instead and try both games side-by-side: as is ever the case, I guarantee you’ll find that the game with a bit of conflict in - even if it’s only thanks to a wafer-thin sprinkling of theme - is superior.