Omen: A Reign of War Review 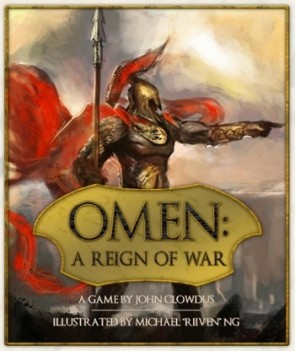 Two player games are a crowded field for me. That’s not a bad thing, to be sure, as I play probably more two player than any other number, but it means that any new two player game needs to be something special. Summoner Wars is my go-to for under an hour; War of the Ring for two hours plus, and in between is a bunch of stuff from Monsterpocalypse to Memoir ’44 to Space Hulk, depending on mood and opponent. And card games are particularly crowded, having to compete with Dominion as well as Summoner Wars. So when I saw the previews for Omen, I was intrigued but unsure of whether it would bring enough to the table to make room for itself. It has some stiff competition on my shelf.

One thing is for certain – this game has the best art of any game in my collection, bar none. All of the art in the game was done by Michael “Riiven” Ng, and it’s simply amazing. It’s very vibrant and almost abstract, conveying more of mood and motion than detail. A lot of fantasy art comes off as cartoonish and sometimes even kitschy – this, however, is something different. It’s dark and moody and pulls you into the game in a way that more traditional art simply wouldn’t.

The art, I think, fits the game. This is a game about two Demigods, sons of Zeus battling to see who will reign supreme over the Greek isles. Players must conquer cities and undertake tasks set by the gods to determine who is most worthy of claiming the mantle of ruler. This is war, and war is brutal business.

Players are competing to accumulate victory points, which can be earned in two ways: Feats and Rewards. Reward cards are dealt in three stacks of four at the beginning of the game; these stacks form the Cities over which the players will battle. Winning a battle grants a player a Reward card from the stack. Reward cards can be played for a significant effect during the game; Rewards that have been played are worth one VP at the end of the game, while Rewards remaining in a player’s hand are worth two VPs. Two identical sets of six Feat cards are also distributed to each player at the beginning of the game. Feat cards detail tasks that the player must accomplish. These tasks include, for example, having five units in one city, drawing five cards in one turn, or forcing your opponent to discard three cards in one turn. Accomplishing these tasks allows a player to flip over the corresponding Feat card; while it’s possible to accomplish more than one per turn, it’s not common. Each completed Feat is worth two VPs at the end of the game.

While Demigods aren’t afraid to get their hands dirty, most of the work is done by their minions. Units are the bread and butter of Omen. During the game, units are played to the cities as a means of accomplishing Feats as well as battling for Rewards. Units can be one of three types: Soldiers have an immediate effect upon entering a city and provide on average a moderate amount of strength; Beasts can be either discarded for a powerful ability or played into a city for a sizable addition of strength; Oracles are the weakest in terms of strength but provide an ongoing resource boon by generating cards and/or coins every turn. A smart player will need to balance all three types of cards, knowing when and where to play each.

A turn consists of six phases. The Wealth step allows a player to draw cards or gain coins; a player has three actions to spend on one of those choices, but if all three actions are spent in the same way, he or she receives a bonus card or coin. The Surge step is the phase when units are played to the cities and previously earned Rewards are activated. The Portent step allows a player to activate all of his or her Oracles, building resources for future turns and sometimes, depending on what is revealed from the top of the deck, receiving a boon from the gods. The Feat step allows a player to flip Feat cards if they’ve completed the requirements during the turn. During the War step, battles are resolved and Rewards are earned, and finally players may discard a unit during the Offering step, receiving coins in return.

When the right forces oppose each other in a city during the War phase, it becomes War-Torn and battle breaks out. A city becomes War-Torn when one of two conditions are met: either the opponent has three units in the city, or both players have a combined total of five or more units in the city. (Beasts count as two units.) This is a brilliant mechanic because it makes initiating battles a complex affair. I may want to discard an opposing unit before initiating battle to guarantee my win – but if I do, I also make it more difficult to initiate the battle on my turn. If I play three units to a city where my opponent has a single unit, a battle will take place – on my opponent’s turn, after he has the opportunity to reinforce and assuming that he doesn’t do something funky to discard my units. Battle resolution itself is fairly simple – higher strength wins, with ties going to the player with the most soldiers. Successfully winning a battle grants a Reward card. Rewards can be very powerful when played at the right time – Hades’ Caress, for example, allows a player to play units from the discard pile as though they were in hand. The temptation to play these cards is strong, but playing them eats away at VPs, so each decision is critical to the win. After a battle, the winner must discard down to one unit in the city, while the loser discards down to two. This also presents an interesting set of decisions, as players need to bring enough strength to win without overcommitting and providing an opening on the following turn.

In a nutshell, that’s what Omen is all about. Each decision presents multiple paths, all of which matter. During the Wealth step, players can draw cards or gain coins, or a combination of both. Players receive a bonus by sticking with the same action, but sometimes flexibility is what matters more. During the Surge step, units can be played on the table, or they can be saved for the Offering step, when they can be converted to coins. Knowing when to do either is important. Players will be tempted to save cards and coins to put together a punishing combo – but doing so makes getting hit by a Scarred Minotaur particularly brutal, as you’ll have to discard your hand, ruining several turns of careful planning. On the other hand, playing cards to the table makes them vulnerable to cards such as The Dreaded, which forces a soldier to be discarded from a city. This is a nasty, brutal, unforgiving game where a player can go from being in a dominating position to a broken wreck in a matter of a few turns. It is high on interactivity, screwage, and tension. You’ll never have enough gold or enough cards to do everything that you want consistently. Several of our games have come down to a single coin – had the losing player simply had one more to spend, the outcome would have been different.

I’m excited about this game. It’s unlike anything else in my collection. It’s short, but I wouldn’t consider it a filler – the decisions are too significant. It’s simple and can be learned in fifteen minutes, but it presents an array of complex and rewarding interactions. It’s chaotic, but it doesn’t feel random because each card can be used in multiple ways. It allows players to make good and bad decisions, but it never feels scripted or limiting. It’s rich and substantive and satisfying but can be played in as little as half an hour once players learn the ropes. In short – with Omen, Small Box Games has a winner on its hands, one that will have no problem hitting the table regularly and often.

ScottB is a member of Fortress: Ameritrash, a passionate gamer, and a blogger on MenWithDice.com. Check it out.