Mine-A-Million or The Business Game Review 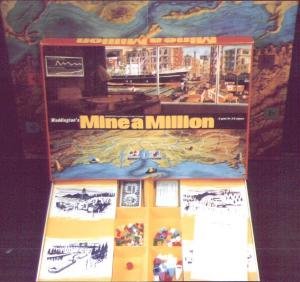 In the long lost days before I was a fully paid up member of the board gaming cognoscenti, but still a keen gamer, I spent a lot of time playing mass-market board games with my non-gaming friends. Our particular favourite was, perhaps inevitably, Risk, which had so much beer spilt on it that the board warped. But the second favourite was a little-known game called Mine-A-Million which, I have since discovered, was later re-branded and sold more widely as The Business Game. I’ve no idea why the name was changed: Mine-A-Million is a hell of a lot catchier if you ask me. Perhaps Waddingtons were seeking ride the coat-tails of Monopoly, or maybe trying to make the game sound like a classy, upmarket pass-time for merchant bankers. If the latter then it’s a serious mistake because it is, in fact, one the nastiest, trashiest mass-market games around which, in spite of some flaws, can be a ton of fun to play.

The premise is very simple: each player controls a mining company, drilling for minerals in an un-named third world country. They each start with one cool little plastic drilling rig on the map board and they start each turn by rolling a dice: on a one or a six their rig produces some ore and they have to take a random event card. Ore can be built up at the pithead but it’s no use there. The idea is to sell it, and to sell it you have to take it to the nearest market town and that’s where things start to get interesting.

To get your ore to the market you have to drive it along the road in a lorry, or take it via the canals in a boat. Before you can go on the canals you need to set up a canal company, and that takes a sizable investment of capital which no-one will have at the start. So everyone has to use lorries, which move across the board according to your dice roll (assuming you didn’t roll 1 or 6 and get some ore). But because you’re a mining company and not a transport company you have to hire these lorries, and there’s a limited supply. So once the ore starts flowing you can take great delight in hiring more lorries than you need and leaving your opponents with ore piling up at their pitheads and grinding their teeth in frustration while they worry about an event card coming up that’ll destroy unsold ore on the board. But on the other hand that’s a waste of money, and at some point you’re gonig to run out and everyone else will get a chance to put you in the same position. Gradually, in spite of the best efforts of the other players, you’ll get ore into the warehouse and be able to flog it off in exchange for pounds. You can use these pounds to hire more lorries (and thus annoy your opponents more), build more drilling rigs to get more ore and eventually set up a canal company and hire barges which can transport a lot of ore at once and move rather faster than a lorry, of which more shortly. But if you get a million of it it won’t, sadly, win you the game. The catch is that you don’t need a million pounds. You need a million dollars.

But to get dollars you need to sell your ore at a different port overseas. And to get overseas you’ll need some kind of boat and that’s where the barges come in. Barges can carry more ore than a lorry and the canal spaces they move through mean they have a shorter route to the warehouse than lorries do, and they can also sail across the sea to sell your ore for dollars. There’s a limited pool of barges, just like lorries, so the same strategies of scarcity apply. But there’s another catch - barges only get a permit to leave port if they’re fully loaded and if, as is the usual case, you don’t have enough ore to fill it up you have to transport other players ore for them. They have to pay you for the privilege - no more than you would for transporting your own ore, mind - and have no say in the matter. But since it doesn’t loose you or them any money, and it’s getting ore to the port to be sold, that’s no big deal, right?

Imagine you’re running a tight-knit operation in which you’re deliberately trying to be as efficient as possible and not leave too much cash in the bank. After all you can’t just exchange those pounds for dollars - you need the pounds to finance transport but you need dollars to win the game. It’s going well: you’re shipping ore overseas and getting in a steady income of dollars without accumulating too much excess cash. Then, suddenly, another player hires a barge, fills it with your stock of ore and hands you a bill for tens of thousands of pounds. Tens of thousands of pounds that you don’t have. What to do? Well you could divert some of your ore that’s going overseas for dollars and flog it for a sum of pounds that you don’t really need. That would be bad. But if you can’t pay it at all you have to sell your ore direct from the pithead for an absolute pittance compared to what you’d get for moving it to port and that’s a complete disaster: you’ve suddenly got no ore, no dollars and hardly any bloody pounds to get your operation back on its feet again.

This illustrates nicely what this game is good at: forcing the players into intricate and difficult balancing acts between competing goals. To win you need to sell ore for dollars. To get dollars you need to sell ore for pounds. To get either you’ve got to try and monopolise transport for which you’ll need pounds in a dastardly circular requirement. To stop other people screwing you over you need to keep your flow of both pounds and dollars in perfect balance with not too much and not too little of either. Indeed I admire the way in which this game limits the amount of screwage you can inflict on other players partly based on skill: good players won’t get shafted by their competitors so often because they’ll have a balanced operation and there will be no point. A further layer of onion is presented by the final piece in the game, the ship, which can only carry ore overseas to sell for dollars but can do so using a fast-track sequence of spaces to make it faster than a barge and can carry a ton of ore. Again you can “steal” other people’s ore for which they must pay you so, again, you can take ore away from players badly in need of pounds and sell it on their behalf for dollars that they don’t need at all. Everything is perfectly in balance. And then, through it all, come crashing the big fat fist of randomness.

It isn’t really the dice that does it. The dice governing movement and ore production usually balances out over the course of the game. No, it’s the event cards you have to take on a 1 or a 6 that cause major problems because they’re tied in to specific circumstances. Some cards, as I already mentioned, cause ore stacked at a pitheads to be destroyed but that’s of little or no consequence for the game if little or no ore is stacked at pitheads. However if one player has a big stockpile and others don’t, that card will completely destroy his game, at least in the short term. Perhaps more worrying is the card that causes ships to sink. Again, of no consequence if there are no ships on the board but if someone looses a big cargo of ore when the boat goes down, then that can determine the winner of the game, all down to a dice roll and a card draw and that sucks. Interestingly different editions of the game seem to have slightly different card rules. The one we used to play instructed players to have the card deck face down first of all so no-one knew what event was coming next and then, on the first reshuffle, to turn it face up so all the players would know what event was in the pipe even if they couldn’t control when it would happen and to keep flipping it round on each reshuffle. Other editions say just face-up or just face-down or leave it up to player choice. Trust me that face-up is best: there’s still plenty of chaos and excitement in the game but suddenly, rather than having your game torpedoed out of the blue by a bad event card, strategy can include an element of calculated risk. Although since it’s entirely possible to get several event cards in a row, you’ll still be blindsided some of the time.

Given that players can loose vast amount of ore into the abyss thanks to sudden unforeseen events or can have their ore constantly stranded at a pithead or stolen or diverted by the other players, it follows that this might take a while. It does: a 3 hour play time is not at all unrealistic and it may occasionally run for longer. This is the single, central biggest flaw that the game has. Even with a beered-up crowd of screaming trash-lovers the game starts to drag toward the end. Those very random events can hurt really badly because of this, when you’ve worked hard for a full 150 minutes only to be denied victory by a particularly unfortunate turn of fate it’s not much fun. And in honesty for all the merits of the game there’s just not quite enough strategy or enough interaction to fill all those hours. It’d be a great 90-120 minute game though and happily I suspect that a few house rules would help. Having a queue of face up events to make it a bit more strategic, for example, or simply reducing the winning post to make the game a bit shorter. I’ve never tried any house rules though and that’s testament to the fact that even as it stands, and aged as it is, there’s still plenty of fun to be had here.