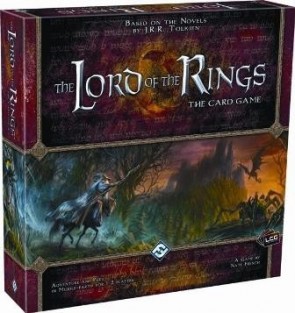 Game Name
Lord of the Rings: The Card Game
Publisher
Fantasy Flight Games
There Will Be Games

My review covers solo play of the 4 different decks included in Fanasy Flight's Lord of the Rings LCG. I have 2 core sets and I tested each deck 5 times against the initial game scenario: “Passage Through Mirkwood.”

For those familiar with Fantasy Flight’s LCG format (Living Card Game), the core sets give you multiple decks of cards, a rule book and other bits—here we also received 2 cardboard threat counters that fit together nicely, a first player marker (unneeded solo) and a sheet of cardboard bits representing damage, resource and quest progress markers.

I believe the rulebook is well laid out, with plenty of examples for play. Some explanation is given for deckbuilding, and the scenarios are set up for you at the back of the book. I’m biased, because I have played many FFG games over the years so I have a lot of experience with how they do a rulebook. This game introduces a lot of new concepts that beginners may have trouble with, but given a couple plays with the book nearby, it is graspable.

Here I will review what I think of the 4 decks and how they did in solo play:

The leadership deck has a nice balance of questing and combat. With its extra resource gaining and useful allies, this deck does pretty well solo. It also has some powerful and useful events. Where this deck suffers is the high starting threat with no threat reduction options (other than Gandalf) and lack of card draw. Losses came from overwhelming threat usually from bad luck with locations.

The lore deck has exceptional card draw and damage healing capabilities. Use of attachments to help with combat, allies for card draw, healing and seeing threat make this a strong deck against foes. But, lack of questing causes this deck to suffer. Certainly you can quest with both Bereavor and Glorfindel, but lack of stronger combat allies makes this a difficult prospect. Losses came again from being overwhelmed with threat. This deck has the highest starting threat at 30.

This is by far the most frustrating of the solo decks to play, even on the first quest. This deck has a strong mix of combat events, attachments and allies. Its heroes also do well—in combat. But the lack of questing is what’s so frustrating.2locations in the staging area is very difficult to overcome.3 or more is a loss. This deck also needs a steady supply of foes to fight, or it seizes up as Legolas ability can sometimes make up for the lack of questing. Overall, this was the worst of the 4 decks solo. t lacks card draw, threat reduction, questing and prevention. Not a fun solo play. Losses came to overwhelming location threat.

Ironically, the most fragile deck is the best to play solo. It takes some learning but, understanding recursion and getting the most out of Gandalf, makes this a powerful deck to play. It has high questing, strong threat reduction, counters to just about anything you can think of and a very good fighter for what he does. The one loss came to being overwhelmed by foes. This deck lacks resource gain, so you can feel like you’re playing in poverty at times. This deck has the lowest starting threat at 24.

Overall, I really enjoy the challenge of solo play. It’s not easy to beat this game solo, even on the basic level. However, solo, the game does play you—sort of. Usually, there’s a smart way to use your heroes each time. The challenge comes deciding which cards to use, when. And sometimes, luck just doesn’t go your way. The less said about the solo Tactics deck experience the better.

I find the solo experience addictive. I really enjoy the level of challenge and have begun doing some deckbuilding. 2 problems stand out. Firstly, even solo, you get more enjoyment out of having 2 core sets. This allows you to ALMOST play tournament legal solo sphere decks against the scenarios. Which leads to the 2nd problem: IT IS UNFORGIVABLE THAT YOU RECEIVE 1 COPY OF CERTAIN VERY USEFUL CARDS IN THE CORE SET! (Dwarven Tomb—I’m looking at you!) That FFG gives you the opportunity to use 3 copies of cards in a deck and expects you to buy 3 core sets to get 3 copies of some of the most useful is simply INFURIATING! What this means is, buying a 3rd core set to get something like 8 extra cards for 40$INEXCUSABLE! (I have yet to do this but if I wanted to play in a tournament, I certainly would buy the 3rd set.)

Minuses:cards need sleeving, certain decks are DEFINITELY superior in solo play, lack of 3 of each card in the core set and 1 copy of certain cards is unforgivable.

I’m really enjoying Lord of the Rings LCG and am looking forward to the expansions with new heroes and quests. So much for my 2 cents.

There are no user reviews for this listing.
Already have an account? Log in now or Create an account
Discuss this article
Log in to comment
Posts in discussion: 20 Plays On Lazy Summer Days: Lord of the Rings LCG Solo Play Review