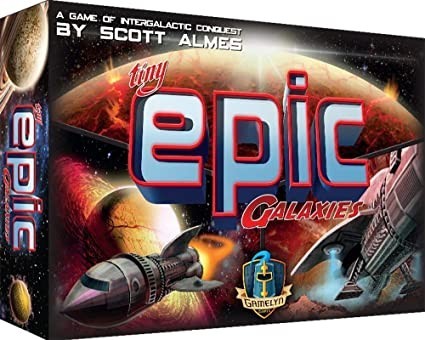 King of Tokyo, the new game from Richard Garfield, in Review 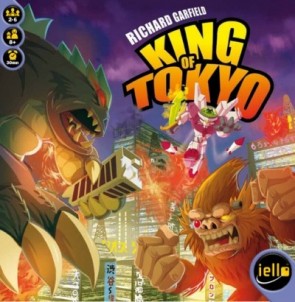 That is King of Tokyo! You roll dice, you hope for miracles and curse the failures while your monster of choice batters your opponents while chewing down cards for victory points and upgrades.

The set up is easy everyone takes a monster standee and sheet – all functionally the same but you know The King is better than Cyberbunny. Place the board in the middle; arrange everything else around the outside. Done. Only thing to note is to draw three cards off the deck and place them face up – everyone gets to see what is coming.

First turn, The King! Roll dice, mutter darkly, reroll dice, more mutterings and then finally reroll all the dice and accept your fate.

2x Hearts, 2x Claws, a One and a Two. Bah. Straight into Tokyo (claws rolled) though and score a VP. Can’t gain more than ten life so help there, and nothing else adds.

The King takes three damage for being in Tokyo while Cyberbunny (and everyone else) is outside. The King retreats tactically withdraws. Cyberbunny is now in Tokyo with a VP for going in and three more for the set of 3x Threes.

Cyberbunny was obviously gloating too much and didn’t notice that mechanical beast behind the building – two damage. The Lightning Bolts give Meka two shiny green cubes and a chance to buy cards, while the other dice are no good.

Checking the cards they are all expensive so will have to save those cubes for later.

Ok, so that is King of Tokyo minus the gloating, panic, backchat, trashtalk and everything else that comes easy with a game this simple.

It could be described as overproduced but that gives the game a fantastic sheen with everything being of a high standard and covered in thematic artwork. Indeed your hard earned cash pays for someone to punch out all the card and bag everything up into the made to measure insert – opening the box is a surprise.

The game suggests that it plays with two to six players, but I think three to six is correct. With two players it is literally a race to do most damage before who ever sat on Tokyo first wins via VPs.

Ideally you would play with five or six as then there is a fearsome amount of damage being thrown around and players rapidly drop out. This isn’t really a problem as the game is so quick then you will soon all be playing again. Also if someone storms to a VP win then most players are still rolling right up to the end. I guess if it is really a problem then there is a card in the pack that you could just apply to all players – ‘It has a Child’ which reboots your monster for the cost of all your VPs.

Yes the game is luck based, but you get a number of rerolls and nothing beats that feeling of riding your luck especially when that means you get to smack your friends (monsters) about the head and gloat about it afterwards. You can easily keep playing this all evening and even the drink addled will be able to keep track of what is happening.

I recommend this game to anyone who is happy to roll dice with friends – you know if this is you. Indeed of the group I have played with two have gone on to buy their own copies and they have now played those copies with friends and family.