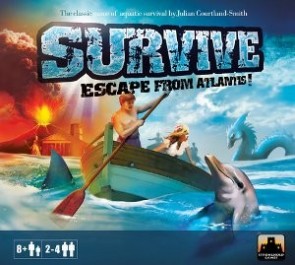 In the beginning there was a mass market board game called Survive! which enjoyed the distinction of actually being widely enjoyed by the hobby crowd. So, in order to confuse the masses of unwashed nerds baying for a copy, other publishers reprinted the game several times with marginally different components, board shapes, rules sets and titles that tended to include the word Atlantis and no-one knew which were worth playing and which were not. And there was much wailing and gnashing of teeth. And then some of the unwashed set up a publishing company of their own and sought to dissipate the confusion by getting the original designer on board and printing a definitive version which could be played with any one of the different rules sets that had come before, or any combination thereof, and there was much rejoicing. With great wisdom and foresight they chose to combine the titular variations of those that had gone before and called it Survive: Escape From Atlantis and the marketing people saw that it was good and gave it their dubious blessings. But the real question remains - is it any good?

Before we can go any further, I have to talk about the cardboard. You all know how satisfying it is punching those nice, meaty cardboard chits in Fantasy Flight Games out of their sprues, right? You know how great it is to shuffle them around, knowing full well they’re thick and robust and can take a lot of punishment, yes? If you do, you’re in for a treat when you open this. The game has cardboard land hexes in three different thicknesses, and the thinnest one, used for beaches, is the same grade as the Fantasy Flight cardstock. The thickest one, the mountains, could function as a doorstop, or a makeshift weapon. It’s just amazing. I’ve have never seen such a wodge of cardboard. You’d need a hacksaw to cut it. I have no idea how it doesn’t separate into layers but it doesn’t, it just sits around on the board, menacingly, and threatens to crush all the flimsy plastic bits from your favourite game under its extraordinary bulk.

Aside from the incredible cardboard monstrosities the game pieces are fairly pedestrian. There’s some nice wooden sculpts of whales, sea serpents, sharks and people but they’re not brilliantly finished, and I found the art somewhat gaudy and flat. The board is comprised of hexagonal spaces with a small island on each corner. To set up the game you take your life into your hands by reaching into a drawstring bag (thoughtfully supplied) which contains the dangerous cardboard hexes and arrange them randomly to form a central island. You put a sea monster in the middle, and one by each small island, and then the players take turns to put their little people on the land hexes.

But these are no ordinary people. No. Each has a number printed on the underside which is its value and which is hidden from all the other players. The idea is simple - you also start with a couple of boats and you need to get your people from the big central island to one of the little ones, but the island is slowly sinking into the sea. Each turn a player starts by removing a land hex of the lowest value available, which often results in some sort of malevolent marine life being placed in the empty hex. Some of the other tiles you get to keep for later use and they allow you to move people, boats, monsters or to protect yourself from attack. Then they get to move people and boats and combination of three spaces, and then they roll a dice to see what kind of monster they’re allowed to move and attempt to destroy as many opposing people (and/or boats, depending on the creature) as possible before someone turns over the mountain tile that has a volcano underneath and the game ends. Your score is the individual values of all the pieces you get to safety. And that’s basically your lot, not least because I’m fed up with parroting rules descriptions.

So in a nutshell you’ve got hidden information which is totally critical to the game, random placement of horrible monsters based on tile draw, and a random selection of said horrible monsters based on a dice roll. Chess this is not. What it is, however is a bizarre hybrid of possibly the best drunken game night filler ever and a delightful family game. There’s certainly some strategy in this, just enough to keep your brain engaged as you ponder the wisdom of inserting some of your people into other people’s boats in an vain attempt to protect them, try and map movement routes across the crowded board into one of the two hexes adjacent to each safe island (you can only have one boat per hex, so blocking is a viable and common tactic), and desperately attempt to bluff everyone else into thinking your most valuable pieces are exactly where they’re not. But the dice and the tiles can torpedo you at any moment. And on that level it’s fantastic. You’ll laugh, You’ll groan. You’ll scream in frustration. You’ll gloat as you slam down a defensive tile just when the other players have set up a nicely positioned monster attack. You’ll make “nom nom” noises as something horrible chows down on a poor unfortunate in the water. You’ll probably loose some friends for good. And you’ll get to do all of this in about three quarters of an hour. So what’s not to like? Well, nothing really, as long as you accept the game on its own crazy, chaotic and often brutal terms. It doesn’t play quite as well with two, but it’s still fun and this is a very minor quibble.

So how does something that will cause your fellow gamers to want to beat you to death with one of those gargantuan cardboard tiles make for good family fare? The secret is in the “Escape from Atlantis” bit that incorporates rules from some of the other editions in the form of variants. These allow you to make the game a whole lot tamer for the family crowd. One, for example, is to ignore the numbers on the bottom of the people and have them all valued the same. Another is to add dolphins to the game, friendly sea creatures that protect swimmers they are paired with from being eaten and at the same time their presence reduces the chances of someone rolling a monster and using it to attack. There’s lots more, plenty to customise the game to a level of aggression that suits whoever you’re playing with. The only thing that’s missing, as far as I can make out, is that some of the variants had spinners rather than dice that reduced the offensive power and probability of the nasty creatures still further and made the game fairly suitable for the very young. But with the use of a dice and a table you can probably mimic even this.

If the included variants, with extra dice and pieces to support them, are insufficient for you then you can also buy some cheap extra mini-expansions to further increase the options on offer. One is a giant squid piece which gets placed every time you add a whale to the board: the squid ignores people in the water but will devour people on boats, or even land tiles and it actually gets to eat a piece when it’s placed. In a nice thematic twist it can also eat - and by eaten by - whales. As written it’s a ridiculously powerful piece since it means a player can basically destroy and opponent’s piece every time a whale gets revealed but there are a couple of variants that tone it down a bit. Use one of these and it can be lots of fun - having a creature that can actually eat people directly off land tiles significantly alters the strategy of the game. It’s also amazingly destructive - all the games I played with the squid ended when all the people were either safe or eaten, many turns before we got to the mountains and were in danger of turning over a volcano. The other is the 5-6 player expansion that replaces the wooden people in the game with plastic equivalents and adds two more sets, as well as some replacements for your ominously thick mountain tiles, and who couldn’t love some more of that meaty cardstock around the house? I was surprised to find that the little plastic pieces are actually much better than the originals - they’re more pleasing to look and and touch, fall over less often, are more uniform so you can’t start to recognise certain pieces due to manufacturing flaws, and there’s no issues with the number being invisible on the blue pieces. Playing with that many also significantly changes the dynamics of the game - the board is very crowded, boat space is at an absolute premium and, most interestingly of all, a social dynamic emerges that doesn’t exist with fewer players. Normally boats get controlled by a single player and the dice dictate who gets to eat what, so alliances and grudges aren’t that much of a big deal. But with more players there’s more opportunity for sharing space and to build up a track record of co-operation or bullying with one or more of the other players.

Survive: Escape From Atlantis is a terrifically fun, fast game that amazingly succeeds in the odd task of straddling what are virtually two diametric opposites in game taste, being suitable for both your children and your drunken, bloodthirsty gaming mates. It really deserves to be on the shelves of both hobby shops and toy stores, and I sincerely hope the guys at Stronghold games have the marketing muscle to try and make that happen. Don’t kid yourself that Survive: Escape From Atlantis capable of satisfying a desire for something longer, heavier or richer in narrative and you’ll have a great time.