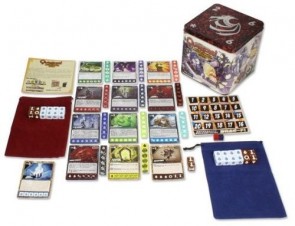 I love dice. I love the feeling of having a handful of plastic shapes in my hand, and I love the thrill of throwing them and trusting that chance will pay off for you. Dice-based combat is almost always my preferred method of resolving conflict in games, like in Nexus Ops. And if I'm going for a short filler-length game, then a dice game like Roll Through the Ages or Zombie Dice is usually my choice. So you can imagine my thrill when I first heard word of Quarriors, the new "dice-building" game from Wizkids. I have a fondness for deck-building as a mechanic, and hey, dice can only help, right? And despite the mind-numbing title, it looked really good. Packaged in an attractive tin with over 100 custom dice and nice cards, Quarriors looks like it's ready for the big leagues. But my first game was...inconclusive. It's very disorienting to not be sure of your opinion of a game. It seems to have had all the elements that I would love, but I certainly didn't come away with tons of affection for those piles of dice. What happened?

After some though, I realized that I believed the words on the side of the box. That tin cube promised "uber-strategic" gameplay, and I came expecting that very thing. Quarriors may be a little strategic, but there's no "uber" about it. My first impression was one of overwhelming transience, like the game had occurred while I wasn't looking. Indeed, even though it's billed as a deck-building game with dice, the deck-building felt entirely incidental to the rest of the game. It didn't punish you for bad decisions like Dominion or Puzzle Strike, and it didn't necessarily reward you for making wise choices. Sometimes you just won't roll what you need, and you may never do that through the course of the whole game. It seemed really lucky and not very satisfying.

But then what was I expecting from a dice game? Games like Quarriors are, by their very nature, meant to be handled lightly. Dice don't roll your way, and that's how it is. And even if it was a super-light game, that's fine. It was over before I knew what was going on, after all. A super-random 20-minute game? Nothing wrong with that. So after considering those factors, I sat down and played a couple more games with my friend.

I am pleased to report that the lightness and randomness no longer bothered me. Now I was bothered by how bored I was.

For a dice game to work, there needs to be a sense that something is at stake. Dice work because they can allow you to swing for the fence and push your luck. Dice are random, and the best dice games, like Roll Through The Ages and Dice Town, allow you to embrace that luck to try for a little more. Quarriors makes you deal with what you roll, and that drains a lot of my interest. Did you just roll all quiddity and no monsters (which are needed to score points)? Too bad, deal with it. You roll the dice, and you are immediately locked in.

The result is a game that feels neutered. There should be a rush when you roll those dice. Instead, it barely registers. There is no push-your-luck aspect, no tension that powers the game. And it's not helped by the non-random combat. You just automatically attack everyone else's monsters, and compare totals. There are no ways to modify those totals, you just check some numbers. That technically counts as interaction, but there's no choice at all involved in it. It's hard to fault Dominion for being non-interactive and to embrace Quarriors.

There's an interesting game that's possible here, and you could probably house rule your way into something you like. What if you had the option to add Quiddity to your monster's attack value? What if you could have three rolls, a la Yahtzee, to come up with your hand? I haven't tried either one of those, but it's worth checking out. The good news is that because it's so low impact, the game could probably have a very high tolerance for variants. But I shouldn't have to house-rule my way to a game that I want to play, especially when the original package costs $50.

The game is designed by Eric Lang (Chaos In The Old World) and Mike Elliot (Thunderstone). That's quite a pedigree, and I find it curious that they could turn in such a disappointing game. I almost wonder if there was some outside pressure from the publisher to sand away rules to make the game more accessible. The barely-there combat is a good example, as are the weird culling rules. But that's not really fair to the designers. Maybe they made exactly the game they wanted to. If that's the case, more power to them. I know that a lot of other people really love the game, precisely because of how quick and easy it plays, and how fluffy the whole thing is. I see value there, and heaven knows I like some stupid random games, but I don't think I ever need to play Quarriors again. For all its good looks, it just doesn't provide much enjoyment beyond the actual physical click of dice hitting the table.

I publish all of my reviews on my blog, The Rumpus Room. Check it out, subscribe, leave a comment, and argue with me.