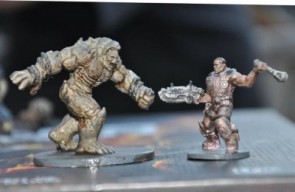 So...this game came out called Gears of War. You've heard of it of course. You've probably even heard of the very dark grey and brown third-person cover-based shooter which pretty much defined the modern cover-based shooter. The boardgame was announced at that time as it was clearly a case of FFG striking while the iron was hot after the relative success of Doom. And the new game would clearly be yet another hit.

The game now lands with a relatively wet pitiful squeak preceded by a flurry of press in the video gaming circles. Long after the initial buzz had rotted away to dust. Even Launius had not bothered to pick up a copy at Gencon. That's a bad, bad omen--although he was busy showing off Elder Sign.

And the game lands in the middle of a suddenly crowded niche of co-op and light dungeon crawlers.Oh, and the game is really good. Possibly a true sequel to Doom, and something that makes me suddenly VERY interested in where the new Descent 2 is headed. So, let's start the description and evaluation crawl.

32 minis. 3 or 4 flats of cardboard, and a couple hundred cards. It is clear from this $70 game that the $60 amazing Doom box-o-stuff days are long past us.

The cards and components are fairly typical, but share Gears of War's dark and dingy grey brown palette. The tiles resemble Mansions of Madness' tiles with a handful of spaces on each. The only other feature are a selection of half-height walls marked with cover spaces. So yeah, kind of ugly, but matching Gears' artwork style.

The minis are quite nice, but in the same paint-unfriendly soft plastic as the coffin box game. Details are good, and the sculpts are both really close to the videogame images as well as easily distinguished in actual use. The actual player-controlled figures...have the same level of detail but really suck from a usability standpoint.

The Gears minis are extremely indistinguishable. Augustus Cole has a very different aggressive pose, but the other three are just three guys with roughly identical poses holding Lancer Assault Rifles. Marcus has his gun raised just slightly. The other two are almost completely visually indistinguishable and all are cast in the same shade of red. The really criminal part here is that one of the two impossible to distinguish has a shotgun as his starting weapon. Someday, someone will learn to make the bits visually distinctive even when unpainted. FFG hasn't gotten that bit down pat yet.

Surprisingly long. The rules run for 24-26 pages and include some details of the 7 missions. The rest of the details are on a set of 3-5 mission cards. The missions themselves are notable as being lifted faithfully and directly from the first game in the series. Each has a few stages, little bits of "cutscene" text, and a whiff of surprise if you play them cold and without peeking at the rest of the card stack.

Each mission also features only 3 enemy types, with the only boss-like monster being the oversized Berserker. It is featured in only 3 of the missions (I think). And of course, the missions are mostly go there, do this. There is also a spectacular mission where you are chased by an invincible Berserker and a Horde Mode which pits you against waves of baddies that get stronger over time.

As far as enemy types, there are guys that rush you, guys that rush you and blow up (same minis). Guys that shoot at you from cover. Guys that ignore cover and shoot at you with grenade launchers, guys with shields that are really freaking hard to kill, and a couple of sniper guys. And there is a big hulky thing that I could SWEAR comes at you while screaming "S.T.A.R.S.!"

And there are weapons. You start with pistol, assault rifle and grenade. You always have access to pistols, and the assault rifle doubles as a chainsaw against smaller baddies. You also get a mix of enemy weapons like machine pistols and grenade launchers. Mostly the diferences are numbers of dice, range, but the odd special power mixes things up.

The way the thing works is the classic co-op game model. You do stuff, they do stuff. The structure is relatively close to Castle Ravenloft, but with some terrifying differences. You can either move OR attack OR use a card power which allows a combination move. In practice, you are using the combination moves, with the basic options as a last resort to cover not having the right card.

These cards also provide Overwatch counterattacks as well as options for dodging and tagging along with a friendly player as he moves. And cards can be spent to give you extra minor actions like picking up dropped weapons, ammo, or rescuing a downed companion. The problem is, cards are also health. You only draw two cards per turn, and damage requires you to discard the same cards. Run out, and you miss your turns crying about Maria until a companion comes to rescue you. Which costs them a card.

That's the really strange part about pacing in this game. When things start to go bad, they completely fall apart rapidly. It isn't a lengthy spiral at all. And once you've played a couple of games, you enter every turn with a sense of trepidation. This ties into the movement and cover system. It is all very simple--even more basic than Claustrophobia. There are spaces. If there is a cover space available, you can jump into it, providing 1-2 extra defense dice. Because you are so worried about suddenly dying, you really want those extra dice. Movement also allows you to just run past things. No stacking. No attacks of opportunity.

This gives the game a level of simplicity that more resembles Claustrophobia or Ravenloft. The actual play is just as quick once you get used to the quirks. There are some good and bad points that crop up as you start comparing:

1. The only wacky chaotic events are the 2-3 mission stage cards that are in a fixed order for the mission. The only other serious aspect of whimsy is that the mission setups have a randomized room order to create the maps. Each room is also a one-entrance/one exit affair. That means the maps are very, very linear. Any branching or backtracking comes from the mission.

2. Tile terrain matters in Gears. Aside from cover, there are also walls and spaces you can shoot through but not move through.

3. Treasure does drop in the form of occasional enemy weapon/ammo drops and spaces where you can pick up weapons ammo.

4. Spawn points. Enemies can spawn only at a certain place on each tile. Grenades can close them, forcing the spawns to be further away.

5. Each enemy has multiple AI cards with different behaviors. There is a trend of personality for each baddie, but there is enough variance to keep it from being completely rote. There are also overall General cards which do little generic things.

6. Even the little tiny weak figures can occasionally kick your ass. The difficulty is brutal.

The content and style of game also compares well to Doom, except that Gears is superior to Doom in every way. It is faster, slightly (only slightly) moreforgiving, and the whole ammo thing has been revamped so that you only use ammo to add extra attack dice to a shot. (Some of the nastier weapons do use ammo for each shot. Pretty much just area effect and heavy hitters.)

Teamwork is also much stronger in this game. You tend to want to stick together as you can take advantage of Follow moves and rescue bleeding out players.But having a player take the medic role and play a number of cards which give cards to his teammates may be essential. The game is relentless. There aren't breaks, and the best you can hope for is that you aren't being torn apart just yet.

Corey really did nail this one. It feels remarkably faithful to the source in terms of play and chrome rules. That the missions are themed (and named) after levels in the first game cinches it. Even though the first game it models is 5 years ago, I remembered 3 of the levels. This is really the first game I've played that was styled after an FPS that really feels like an FPS. That it properly models enemy weapon drops, ammo. There is a card for Active Reload (the little system in Gears that lets you reload faster if you hit the reload button in the right gap in a running progress bar.) The enemies that are immune to the chainsaw attack in the game are...immune to the chainsaw attack here. And the game reinforces the idea of staying in cover if there are enough guys around.

All this with faster speed, less calculation, and with the only annoyances being the high difficulty and the indistinguiashable character mini sculpts.

I'm quite taken with it, and it has been my goto minis battle game. It definitely feels like more of a game than Ravenloft Ashardalon, and pulling in some of the aspects and style of Mansions of Madness. The difficulty, theme, and relative flavor far more resemble Doom, but with pretty much none of that game's drawbacks.

Review of a game with giant-necked marines.