Panic Station - BSG in 45 minutes? You better believe it. 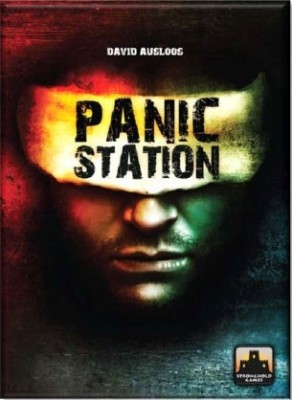 When I first heard of Panic Station, I was really excited. The description made it seem like it could give you the BSG experience in less than an hour. I'm writing this review because that is 100% the case. After 7 plays, I'm convinced this is a great game that's going to be a hit.

If you've ever seen John Carpenter's The Thing then you'll already know what Panic Station is all about. It's a game of paranoia where someone will become infected and will then seek to infect the rest of the humans on the expedition. You can't trust anyone because everyone is potentially infected. You are never sure who's good and who's bad and this leads to some great tension.

I usually start my reviews by keeping my feelings fairly obscured, but this time it's hard to do that. I really like this game and I think it accomplishes exactly what it sets out to do. I'll tell you what I like about this game and also address some of the rules issues that seem to be coming up. Hopefully by the time you're finished reading you'll share my enthusiasm for this game.

If you'd like to read the rules to Panic Station they are here on the Geek.

I'll be honest, I had a lot of issues with the rules the first time I read them. I found it a bit difficult to find things when I had questions. I also felt like there were holes in the rules that left too much open to interpretation. But then I played the game a couple times....

I'm happy to say that most of my fears were unfounded. Sure there are some ambiguities but this is a game where the spirit of the game is more important than the actual rules. If you're not sure how to handle a situation then figure out what works best for the game and play it that way. The gameplay flows really well once you figure out how the game works so I think you'll find very few questions after a game or two.

I normally despise games that force me to have to come up with my own interpretations. I like rigidity in my rules so that I don't have to guess how to handle situations. However in Panic Station, the game is the thing and if you have to play it loose then so be it. It's worth it for the experience.

There's some great parts of Panic Station that really make the game shine. Here's some of my favorite mechanisms that drive the game

Forced trading - When you enter a room with another character you have to trade a card with that player. This is the primary way that the infection spreads and it's really quite genius. If you didn't have this, it would be obvious that the person trying to trade would likely be the infected. This forces everyone to trade and helps protect the identity of the infected while helping them spread their infection.

Cancellation of infection - At first, I thought this rule was terrible. I actually hated it the first time I played, but the more I played the more I loved it. This rule serves 3 purposes:

1. It allows you to stop the infection from hitting you.
2. You now know who one of the infected is, maybe more. You can then tell this information to the table so the humans have a better chance of winning.
3. Perhaps most importantly, this allows the infected to potentially pull gas cans out of the humans' hands. If an infected is widely known then the humans will seek to avoid him. The infected can then actively try to infect a human basically forcing him to either accept assimilation or give up a gas can to stop it.

Some people feel like its a bit difficult to have to remember what your infection status is. I did in my first two games but then it becomes second nature. Just put the cards in the back of your hand and you'll have no problem. It's incredibly important to the game to have the ability to cancel infections so it's worth the small amount of frustration you'll experience in the beginning.

Shoot instead of trading - When you walk into a room with another player, you have the option to attack them (if you've got a gun or knife) instead of trading. This gives you a way to get in extra damage on someone that's infected. Or if you're infected, you can simply try to kill one of the humans. It's a great option for times when trading just won't work.

The parasites - As if not knowing who's on your team isn't bad enough, there's parasites in the base. They appear at very inopportune times and if you don't deal with them quickly they can do massive amounts of damage. I especially like how they get a turn to move and do damage which really helps the infected.

Room cards - Some rooms have special search functions which give you different types of search options. This is great because it lets you get more items in your hand and gives you more in-game options. The downside to this is that once a room is searched further searches cause parasites to appear. As mentioned above, these guys can be nasty. This limits the usefulness of these rooms because using it too many times will cause the base to get swarmed. There's not nearly enough ammo to deal with all the parasites so you need to choose your searches carefully.

The tension - I love the tension of this game. You simply cannot trust anyone. It makes for a really great game because the people who are infected will do their best to seem human, perhaps even trying to help you for a turn or two until they've gained your trust. Then they strike. A clever infected player will wreak all kinds of havoc on the humans. That makes for a wonderful amount of tension because you just can't trust anyone.

Humans vs. Infected - Some people claim the game is broken because you can simply choose to get infected and then almost always win. Sure, you could do that. You could also play BSG and declare you're a Cylon from the beginning and just lose badly. You can play Saboteur and help the bad guys win. You can break almost any game like this if you really want to. What you need to do when you play this game is be the best human you can as long as you can and if you get infected, then you switch gears and be the worst human you can. I like that aspect of the game because it really increases the tension. If I get infected, I'm sure not telling the folks I know are human because they probably have some degree of trust in me. It becomes my best weapon to win the game and make them lose. In fact, you can't say you're the host or infected as it's actually against the rules. This keeps folks from joining the infected just to win.

4-6 players - The game works really well with any of those player counts, but as you go higher in players, the infected have less turns to spread their evil and must play a bit more aggressively.

Battlestar Galactica, but in 45 minutes instead of 3+ hours. You get a lot of tension and paranoia in a very short game. BSG offers perhaps a deeper experience because there's much more going on, but Panic Station distills all that down to a more casual game length.

Panic Station is a great game that suffers a bit from rules ambiguities. That said, once you get the spirit of the game, it's a blast to play. There's a lot of room for interpretation which I think is good because it keeps the game loose which makes it play fast and fun. The tension is palpable from the start of the game and ratchets up from there. You'll have backstabbing and trickery all in a very manageable game length which begs for repeated plays.

I rate this game a very solid 8 out of 10. I think it's a very fun game that does everything I like about BSG in 1/4 of the time. This is a welcome game to any collection and it's one that I'm looking forward to getting a copy of.

Panic Station is going to be a winner. I think this game really delivers what it promises on the box. Gamers are going to dig the tension of the game. Sure, there are some quirks in the rules, but when you play by the spirit of the game they're hardly a problem. The game is much more than the sum of it's parts and when those parts come together it's a ton of fun.

Disclaimer - I do occassional work at conventions for Stronghold games and also work as a part-time playtester.