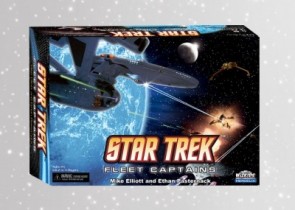 Can Star Trek Fleet Captains possibly be as good or bad as you have heard?

I can honestly say I have been looking forward to Star Trek Fleet Captains for the past two months ever since it popped on my radar. I have always been a huge Star Trek fan, and have watched every show and series that has ever been made. I have come to appreciate all of the various casts and characters, and have always wished for a game that could capture the feel of the Trek universe. My interest was piqued when I hear about Star Trek Expeditions, until I saw that that famed Dr. Knizia was the designer. I could not imagine a more awkward marriage of designer and content if I tried. Just the thought brought up images of a bizarre “shotgun” wedding where the best man tells Reiner that he’s got a purty mouth. In truth, it made me shudder. Most of what I have heard since the game’s release has led me to believe that this is, indeed, a bad idea. Can anyone say “Math – the abstracted game of repetitive, thinly themed Star Trek cooperative adventure?” B. S. I call it. If you like the game, suck it, nothing in that game comes even close to capturing the feel of Star Trek. If you think it does, you’re not a real Star Trek fan, just a poser. Yeah, I said it!

Along comes Star Trek Fleet Captains. Mini’s? Variable board? Multiple missions? Most of the great characters I remember? Direct conflict? Dice? Exploration? Colonization? Customizable command decks? Holy crap! Sign me up. And sign up I did with my hard earned money with a coolstuffinc preorder………

Flash forward almost two months. The first reports come out. Cards that broke open and wreaked havoc and destruction among both Klingon and Federation ships alike (did the Borg get in there?). Cards so thin you can get a paper cut. Crappy assembly of ships. Whispers of bad rules and shoddy inserts. My money! Good god, my money!

Flash forward another week as I wait for my copy of Star Trek Fleet Captains to arrive. Reading reports daily of mass destruction and frustration. Steeling myself for bitter disappointment. I get home and the box is on the doorstep. Deep breath…..

My game is well packed (thanks Coolstuff) and intact (thanks FedEx). I open it up and mercifully, even though the cards have popped open as described, the cards and all minis seem to be intact. I carefully remove and check everything with a mixture of excitement and disappointment.

Star Trek Fleet Captains is good people. It may even be great. The game has a narrative. It tells a story, and the story has been different each time I’ve played it (only three times, but there it is). Even when I have lost, I still had fun. Each game has had memorable moments that either made me laugh, cringe or cheer. The system is easy to learn and the game play is quick and enjoyable. The theme is everywhere! The ships, the cards, and even the tiles. It’s not just a nebula, it’s a Mutara class nebula baby! The same one Kirk hid in from Khan and the Reliant. The encounter deck is also great fun. Every time you explore a new hex, you draw a random encounter card if you roll a number printed on the tile. You may run across the Nexus, or a temporal rift, or enter the mirror universe where suddenly the Federation is working with and on Klingon vessels, and the Klingons are manning Federation ships. There are tons of wonderful encounter cards that will always keep the game fresh. Add to that the various missions that you can complete during the game. You may need to establish colonies, or complete a sensor scan of a star, or explore a certain number of adjacent regions, or transport away teams to a habitable planet, then have them picked up later by another ship. You may also need to blast you some Klingons or Feds! Got to keep the balance of power, right? Finally, there is the direct conflict. Maneuver ships into position, then attack! Roll dice, add command card modifiers and see what happens. The ability to play one command each battle can turn any situation on its head. These cards, plus the use of dice, keeps the conflict exciting and non deterministic, though usually the best fleet or ship will come out ahead as it should. The bottom line is, this game FEELS like Star Trek. It is easy to play, fun, quick, thematic and, quite simply, a blast, even when you lose.

Here we enter the rulebook. The design and layout could have been much better. The information is sometimes presented in an odd order that makes little sense. However, in my experience thus far, there are no questions that I have found that could not be answered with the rulebook. It may be a hodgepodge, but it works. I have read far, far worse rulebooks than this. Does that mean that I should not care? Of course not, that’s why it’s under this heading.

OK, lets’s talk about it. What you have heard is true. The card stock is ridiculously thin. Almost insultingly thin. Cut yourself thin. They do, however, seem to hold up pretty well so far. I have sleeved all of my command cards, so they are just fine. No problem. Should I have to sleeve them? No. Would I have anyway? Yes. Moot point for me. I don’t have enough sleeves for my mission cards, but I have found them to shuffle well and they have held up so far, though they don’t get the most use. Cardstock – Fail

Tiles – EPIC FAIL! I cannot sleeve irregular hexagon tiles! Why, at this price point, we could not have TI3 style tiles is beyond me. It’s cheap and tawdry and I hate it. It reeks of cut corners and rushed development. It sucks. Period. Do they work? Yes. Are they playable? Of course. Will I refuse to play this game because of them? No. Does it irritate me every time I play or even think about it (like now)? You bet. Will I be offended when they offer, at a later time, “deluxe” tiles that I can pay for? Yes. Will I buy them anyway? Probably. Will I resent it? You betcha! I was very disappointed in the quality of these tiles. It just leaves a bad taste . I hate it. I think I hate in so much because the bottom line is the game is so good. Why? Why was this choice made?

Ships – I would be remiss if I did not mention the many, many threads about broken ships. I was one of the lucky ones that had no issues. Many were not so fortunate. There is NO WAY at this price point people should have to deal with these issues. I can only imagine the bitter disappointment that people must have felt upon opening their $100.00 MSRP ($75.00 online) treasure to find broken fleets reminiscent of Wolf 359. Bad form lads, bad form.

The Final Verdict (you thought I was going to say Frontier there, didn’t you?)

Despite the issues the game has with its production quality, this game is great fun. I enjoy it immensely. I feel it would be one of the hits of the year if the production quality had been up to par. As is, the game is a blast, and I recommend it highly, but only if you can overlook the flaws in the production. If you are the kind of person who refused to play Glory to Rome because of the art, this game is not for you. If you play Glory to Rome because the game is simply amazing and fun despite the crappy cardstock and cartoonish art, then you will probably, like me, be able to see past the flaws to the gem of a game system underneath it all. I look forward to seeing how WizKids responds to these issues. I think it will tell us a great deal about this young game company and cement its reputation, one way or the other. The choice will be theirs. Until then, I’ll be exploring the final frontier.