This Has All Happened Before... - Battlestar Galactica Review 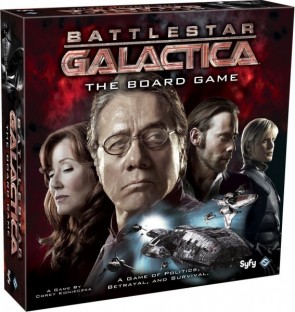 The best games touch something inside of us. They aren’t just a series of clever mechanisms that make us stroke our patchy beards in appreciation. They strike a much deeper chord. They reach down inside of us and grab our attention in a way that is hard to explain. They aren’t just stimulation for us mentally. We form an emotional attachment with the game,  like a favorite novel or movie. Battlestar Galactica did just that for me in the winter of 2009, just a few months after its initial release. I probably played the game close to 30 times in about 3 months. I could not escape it. Two years and two expansions later, I don’t play the game as much as I used to, but its excellence is branded on my head, and dare I say it, my heart.

This is actually my second review of Battlestar Galactica. I originally reviewed it here, but upon re-reading it I’m not very proud of it. I don’t really care for reviews that comment extensively on component quality. And I also don’t like breaking a review down to headings like “the bits” and what have you. I stand by everything I said in that review, but I failed to capture exactly what it was that I love so much about the game. This is a game that has resonated with me on a much deeper level than, “It’s a good game,” and that’s what I really want to focus on here.

So why do I love this game so much? Well, the setting doesn’t hurt. I really enjoyed the sci-fi TV show, particularly in its first two seasons. It examined who we are as humans, and how our actions and choices undermined our ideals. It didn’t seem like a particularly obvious setting for a board game, but designer Corey Konieczka was able to find an excellent mechanism to build on: the paranoia of a traitor. Obviously, this had already been explored in party games like Werewolf/Mafia, and the fascinating Shadows Over Camelot. But the world of Battlestar Galactica fits the traitor mechanism so well, that it’s an obvious match in hindsight.

Each player takes the role of one of the characters from the TV show. Everyone is dealt a loyalty card, which says whether they are a human or a hidden Cylon. The Cylons seek the destruction of humanity, and the humans are trying to reach Earth without going extinct. The board represents the Galactica, and the Cylons have several ships that circle Galactica, trying to damage it and drain its precious resources. Each turn, the players face a crisis, which involves either a difficult choice, or a skill check. The skill check system is the heart of the game. Players contribute skill cards secretly to achieve a certain total. Some colors are positive or negative, depending on the skill check. If the number isn’t high enough, the humans suffer a consequence. A hidden Cylon will use this as an opportunity to secretly hurt humanity. Add to this the Sleeper phase, when each player is dealt a second loyalty card. That means that even though you’ve been a human, you may discover that you’re actually a Cylon later in the game. Talk about room for paranoia.

Paranoia does interesting things to us. When you know that someone is working against you, you begin to leap at shadows. Small actions are interpreted through whatever lens you choose. And of course that lens is a complex mix of previous experience, in-game actions, and gut feeling. There are many actions in Battlestar Galactica that can be interpreted either way. Perhaps the Admiral chooses a questionable destination for the fleet. If you trust this person, you’ll assume that they have no choice. If you don’t trust them, the same action will only make you more certain of their treachery. Every action in Battlestar Galactica has the potential to look suspicious. It’s up to the people who are there, not the game, to give those actions meaning. There have been times where I’ve lied about what I know, just to get people to side with me and against my enemies.

That the game might be a little fragile is unavoidable. Having an inexperienced Cylon can make the game a cakewalk for experienced humans. And if that cards shake out wrong, the humans may be doomed without the Cylons breaking a sweat. The remarkable thing is that the game isn’t too fragile to play. Most issues are ones of experience. It took 15 games before the humans won in our group, but since then I think it’s been about 50/50. Any balance issues are remarkably smooth when everyone knows what they’re doing, and when the game is wonky one way or the other, it is usually still fun. Having played steadily for a couple of years now, I generally play within the same circle of people every time, which is ideal. When you know everyone around the table, its harder to fool each other. But on the other hand, it’s also harder to shake your preconceptions about someone you know well. That’s clearly the way the game was meant to be played, and with five experienced friends, Battlestar Galactica feels like it could be the best game ever designed.

And I think that’s what appeals to me about the game so much. It’s not about how well the game works mechanically, although it certainly does work well. It’s about how I get to spar with the other people around the table, sometimes without knowing it. It’s about reading my friends and creating stories that you can share later on. In terms of how much a game relies on interaction, only Cosmic Encounter even approaches BSG. And BSG isn’t nearly as chaotic, so the players often play each other much more. The finest sessions feel almost like a game of poker. This isn’t just a matter of outsmarting each other. It’s getting in the mind of your friends, and seeing what lurks there.

The details of the setting are very true to that of the show. There are 10 characters in the game, and each one has little nuances that feel very much in keeping with the source material. Baltar is self-serving and cowardly. Roslin gives sacrificially to accomplish her goals, however suspect they may be. And of course, Starbuck can get thrown in the brig very easily. But I really like how the game reproduces the emotions of the show. The paranoia, the sacrifice, and the general darkness are all there in great force. It’s more than just a reproduction of the setting, it’s a meditation on the themes of betrayal, politics, and ulterior motives that drives the original work.

There are two expansions for BSG, Pegasus and Exodus. They are both good, and their biggest value is in the realm of variety. If everyone knows how to play, we rarely go without. But they never really improve the experience that the original brought. Perhaps that’s because Battlestar Galactica is one of those lightning-in-a-bottle games. Konieczka has worked on several other titles, many of them very good, but none like this one. It’s kind of a singularity of mechanisms, theme, and setting. It’s one of my favorite games of all time, but at this point it’s more than a game. It’s one of the best ways to spend time with the people who matter most to me, because it reveals things about them that I didn’t know. Not many games can claim to reach that rarefied place.

Hey, this was posted to my blog, The Rumpus Room. Read it and weep at its majesty.