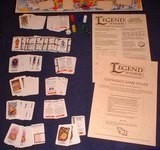 The legend tells of a green mountain... Of an ancient dungeon labyrinth buried deep beneath it... and of the priceless treasures to be found there. It also tells of the fearsome monsters and deadly traps which await all who seek those riches, and how only the boldest and most resourceful of heroes can ever hope to enter the dungeon... And return alive!

As a family game this is simple to set up even if playing the extended game. So for the purposes of this review I will talk about the extended game and point out where the basic game differs.

You shuffle the various piles of cards into separate piles and then deal one of the room cards face down on each of the rooms. Each player then takes a group of five adventurers, with one of each type per player. These are Fighter, Cleric, Dwarf, Magic User and Rogue – the classic D&D dungeon group. You place them in a row left to right with the first character on the right being your group being your leader and the first to tackle any challenges you come across.

If playing the simple game then you only take the Fighter, who will face the dungeon alone.

Each turn you move your group marker from one doorway to another without crossing any other doors in between. Basically this means you move along a corridor or into a room. If you move in to a room you encounter that room card and the player to your right reads out that card. Usually the text will show which card to draw next and then they chain together to create an encounter as you can see here:

Great hall. Long ago this must have been a grand feasting hall. Now it's ornate wall hangings are rotted, it's oak furniture smashed, and the only thing of interest is a...

Huge Throne ...large enough to seat a giant! Carefully you begin to examine it, but then a strange feeling that you are being watched causes you to turn around and see a...

Minotaur lowering it head and charging.
Once it is defeated you find that it was guarding a...

Crystal mirror in a silver frame worth 300 gold pieces. It is small enough to take with you as you leave.

When you encounter a monster or hazard you can change your party leader to give you the beat chance of defeating the relevant card.

Each Character, Hazard, Monster and Spell card has half of a chart on it which pair together to give the numbers required to overcome the challenge.

There are five positions for each, and your ability is marked by a red dot that then gives a number to roll equal or higher on the opposing card. This means that different characters can be better at different tasks as you will see below when I detail their strengths and weaknesses.

For monsters you match up your characters card with the monsters card and cross-reference them to give a score to wound on a D20.

If you roll equal or more then the monster is defeated, otherwise the monster gets to strike. If it hits then you become wounded and turn your characters card over. If it misses then nothing happens but either way you can then swap you party around and try again. A wounded character that is hit again is killed.

Different characters match up against different Monsters, for example Clerics are good against Undead Monsters. Magic Users each have a spell that can be used in combat; again you match your spell up against the Monster and then need to roll equal or higher on the D20. The cross-referencing this time shows if a Monster is immune to that type of spell, so it is best to find out what the beast is before attacking with your Magic User as his basic combat is weak in comparison.

For example a Magic User could be using the classic

So if the Monsters Red Dot matches any of the success lines you only need to roll five or more on the D20 to kill that monster.

For Hazards you still match your card up in a similar way to monsters except that if you fail to disarm/beat it you take a wound. You can try again and even swap your party members around as you can when fighting monsters.

You can retreat from an encounter and leave the room partially explored if you wish.

The characters work as a group with some special abilities amongst them. The Fighter is the standard character and has the best chance at defeating most monsters in combat.

The Cleric is reasonable in combat especially against undead monsters, can also heal the entire party for the cost of a missed turn.

The Dwarf comes after the Fighter in terms of fighting, but has no other special ability.

The Magic User comes with potent spells that can easily eliminate monsters provided they don’t have immunity to the particular spell you possess. They discard their spell after use, but can learn a new one by missing a turn – this can be combined with the Clerics healing powers. Magic Users are poor in normal combat.

The Rogue has the best chance of disarming hazards while being a fair fighter.

As you can see these are fairly standard types for D&D gaming and as such introduce them to a young/family audience.

While exploring the Dungeon you will notice a Magic Fountain in the middle of the board, if you visit here then your entire group are healed without missing a turn. However it doesn’t allow your Magic User to replenish his spell.

For the basic game you must retreat from an encounter if wounded but you then recover your wound at the start of your turn (without missing it). If you are playing solo the rules state that you can do this a maximum of eight times in a single game – you try to get the most gold possible and note it to compare with other games you play.

The game ends once the last room has been explored, each player then adds up how much treasure they have found and the winner is the player with the most.

There are some advanced game options.
First chose spells rather than having a random one. Second chose heroes rather than have the fixed group of Cleric, Dwarf, Fighter, Magic User and Rogue. Finally there is the Treasure is heavy option, where each hero can only carry one piece/card and any excess is dropped in the room you are in.

The game plays smoothly with an easy flow to the turns. The most fun comes from reading out the cards to the other players using dramatic pauses and such to heighten the tension. I can imagine that this would be a lot of fun with young children as a lot of the encounters would be new and exciting.

Of course it is a luck dependant game as you need to draw cards and then roll dice but you have lots of choices while playing such as using your Fighter in combat to make sure you have the best chance of killing any Monster you come across.

Interaction is limited to card reading and dice rolling, although you can voice your opinions and thoughts while checking just how well (or not) your rivals are doing. However it is a fast game and as such makes for a good focus point while chatting – strange how family games often work as beer and pretzels game, might be something about similar attention spans…

The Clerics and Magic Users special powers while potent are quite limited by the need to miss a turn to use healing or replenish spells. Because the game is so short and there are limited numbers of rooms then an entire turn missed will put you at a serious disadvantage. Also I wonder if the Dwarf had a special that was removed from the game at a prototype stage as they are just party filler at the moment.

Finally because it is scripted the game might become stale after repeated plays, however with the various combinations of cards it should take a while before that happens. Also different groups will approach this differently – the beer and pretzels crowd will probably just tease each other about their fates in the rooms previously while families and children will probably focus on fun rather than previous games.

Overall I think this is a good game which really introduces the idea of dungeon exploring and storytelling while keeping the game simple. A reprint would be good as the game plays well and is easy to explain. If a more generic board layout was used then it could easily be expanded with further sets of cards to give different themed dungeons.

Graham Morris and Rik Roses designed this game. They don’t appear to have done anything else according to BGG.