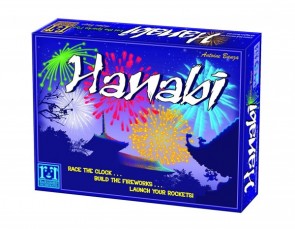 I remember the first time I played Bohnanza. The guy explaining the game started out by telling us that we could not rearrange our cards in our hand. This was, without a doubt, one of the unintuitive rules I had ever heard. I do it so much, no matter the game. Your cards are dealt, you arrange them. Until I learned Bohnanza, it was an automatic impulse. I bring this up because the first time I played Hanabi, I had to keep reminding myself not to draw the cards so that only I could see them. In Hanabi, I had to draw them in such a way that I was the only one who DIDN’T see them.

Hanabi is like nothing I’ve ever played. It could only be described as a cooperative deduction game. The players are trying to put together a fireworks display (or something like that, it doesn’t really matter). The deck is composed of five colors, numbered 1-5. The idea is to collectively create five different stacks, numbering 1-5 in each color. You do this without seeing any of your own cards. Instead, you rely on clues given by the other players about the cards in your hand. Those clues can either tell the player the number or the color on a card or cards. Players can only give so many clues before they need to start playing cards or discarding them. If you play a card incorrectly, like trying to play a card out of sequence or playing a card that’s already been played, you get a strike. If you get enough strikes or burn through the draw pile, the game is over, and the players tally their score based on the cards on the top of the piles. The rules have little rankings based on the scores of the players, so you are shooting for a higher score, not necessarily to win or lose.

I confess, I’m a little tired of cooperative games. They are the truest definition of multi-player solitaire, where everyone is working together to beat the game. Some people complain that a strong-willed player can boss everyone else around, but the real issue for me is that cooperative games never need more than one player to operate. Hanabi is completely different, in that no one player can play on their own. Since you don’t know anything about your own cards, you need clues to get some idea of what you need to do. There’s a real sense of pride when your group clicks and figures out the best way to communicate with each other.

It’s also nice to have a game without any victory conditions. You just finish up and tally the score. If you beat your own score from last time, then great. I suppose it’s possible to “win” if you finish all five stacks, but we haven’t come close to that. We’ve definitely gotten better though. This is especially true with two people, where you get more clues on your hand in relation to the size of the deck. One strange issue is that when someone’s hand isn’t very useful, they normally won’t know about it at all, since no one will bother to give them any clues about their hand. This can result in very lopsided games, where someone just feeds clues to the other players while never receiving any themselves. That’s fine with multiple players, but in a 2-player game it can become an issue.

I’m not normally a “small card game” kind of guy. I like my games to be worth the time it takes to play them, not to just be mechanisms in search of a game. There’s a little bit of that with Hanabi, but I don’t think it’s too big a problem. The game is over in about 30 minutes, and that feels perfect. There isn’t much tension regarding whether the players can do well, but the coordination is especially satisfying. However, I do wonder if the game might have a fixed amount of fun to it. That is, it might be something that could be awesome for a while, then less awesome as a group gets very good at it. Fortunately, it comes with an advanced version. We haven’t tried it yet, but it does look pretty tough, which will be good for experienced groups.

Hanabi isn’t yet available from an American publisher. You can buy imports from various sites, and if you coordinate with someone else, you could probably save on shipping. Since I haven’t bought the game myself, I couldn’t tell you the specific details of ordering. However, you could probably find some good recommendations from this thread on BGG. If your group doesn’t already own a copy, then you could do a lot worse. In fact, I’d be shocked if this game wasn’t picked up by an English publisher like Z-Man games or Rio Grande. The French Canadian version is packaged with another game called Ikebana, but our group hasn’t yet played that one.

The highest compliment that I can pay to Hanabi is that it’s unique in my own experience. It offers something that hasn’t yet been brought forth by another title, and that in itself is enough to recommend it. I do have some concerns about the longevity, but it could take as long as 100 plays before a group really has it down cold. That’s good mileage by any standard, and Hanabi is the kind of game that can get that many plays without breaking a sweat. Definitely check it out.