Clash of the Ardennes Review: Unusual Presentation of a Tired Topic

My Kingdom For A Better Game Title: Kingdom Builder Review 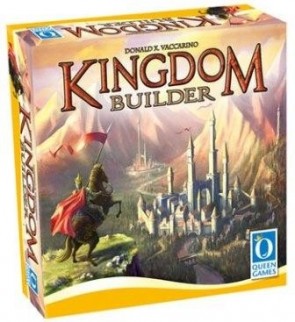 Hey, remember that game Dominion? Of course you do. Odds are, you’ve played it recently. It was a big enough hit to garner six (!) expansions. That’s the sort of hit that only comes along every 5-10 years. Despite what anyone says, Dominion has now crossed into that realm of hits, like Ticket to Ride and Carcassonne, that will get the average joe to brave the dankest game store for a copy. Sure it’s essentially a game about its mechanisms, and sure you need at least one expansion to give it legs. Even so, the game is insanely addictive and wonderfully straightforward. Donald X. Vaccarino is crying all the way to the bank (or wherever game designers store the stacks of money on which they sleep).  The fact that Dominion was Vaccarino’s first design made it all the more impressive. So the anticipation for his next design was sure to be through the roof.

And here we have the much-ballyhooed Kingdom Builder. Let me dispel any suspense right now: It’s not as good a game as Dominion. It’s not nearly as original or addictive. The setting is, if possible, even MORE generic than that of Dominion. And “Kingdom Builder” is probably the worst title ever for a game. But it’s still good. I like it. If it’s not as addictive as Dominion, it’s still pretty easy to play two games in a row. And it could be another crossover hit, for whatever that’s worth.

The board is composed of four pieces, each divided into little hexes with different terrain. On your turn, you hold a card with a certain terrain type. You must place three markers on terrain of that type. The catch? Your markers must be placed next to markers that have already been played, if it’s at all possible. Only if none of the appropriate terrain borders your already-placed pieces can you move to a different part of the board. Points are scored at the end, depending on how many castles you connected to. There are also three more ways to score points, based on some cards drawn at the beginning. These might give you points for putting your markers in a straight line, or for creating one huge mass of pieces. Those will get you the bulk of your points, so you will want to pay attention. There are also some special powers you can get by connecting to special spots on the board. Those are also a big deal, so grab a couple of them.

It’s a very straightforward rule-set, and the whole thing is over in about 30 minutes, give or take. The only issue I have is that the “place next to your own pieces if possible” rule is a very tough one to get used to. You’re immediate impulse is to ignore it. It reminds me a little of the cardinal rule in Bohnanza, where you cannot rearrange your hand. But if you can’t get used to it by your second game, you might as well just quit. It’s easy to grasp after a few tries. And although the play is simple, every move feels both difficult and very important. A friend of mine commented that the game would play even faster if every turn wasn’t so important. This is very much a game where an inexperienced player will lose badly. The placement of your markers (which are shaped like little houses) reminds me a lot of Through The Desert, where you try to place your little plastic camels in such a way so as to connect little points on the board. Except here, your actual goals will shift every time, given the nature of the power-ups and the goal cards. But none of that ever feels too heavy or overwhelming. This is a game to play with people who may not be interested in a round of Imperial.

What I like best is the excellent variety present in the game. There are eight board pieces in the game, each with its own power-up. However, you only use four boards in each game, so that changes the layout drastically. But the biggest swing are those goal cards. They drastically alter the feel of every session. Our first game gave points for putting houses in a straight line, for putting houses in big clusters, and for putting them on different vertical levels. That game went very quickly. Our second game gave points for bordering water, creating separate clusters of houses, and touching power-up spaces. It felt entirely different, and went much longer. There’s a lot of good replayability here, and it doesn’t feel like it immediately needs an expansion. (I’d still keep some shelf space cleared, however.) Also of special note is the production by Queen, which won me over by using written language on the components

I’m worried that the game may be a little too slight to be much beyond a side-show. I’m not a fan of the movement to make games shorter and shorter, because if I have 20 minutes to fill, I’d just as soon talk to my friends.Kingdom Builder is not going to push aside other games on our game nights. But for what it is, it succeeds. It’s super-short, but it’s not super-fluffy or merely a way to fill the time like Quarriors or 7 Wonders. Also, as evidenced by the drab title, this is not a game for those who like their games to be loaded with narrative and a rich setting. I wish that the game had tried a little harder there. But the gameplay is so obviously an abstract, that it bothers me less here than it did in Dominion. Still, Donald X. has shown he has the mechanical chops. I’d like to see him stretch himself next time in the realm of game weight and setting. I know he may not be “that kind” of designer, but we all thought that of Uwe Rosenberg until we got Agricola.

But if you can get past the barely-there setting and the slightness of the whole thing, this is worth checking out. Forget any expectations you have from Dominion’s success. This is not a game-changer of a title, but it doesn’t have to be. It’s a light, casual game with just enough cerebral play to keep it interesting.