Maccabees - The only game on my (last minute) gift guide 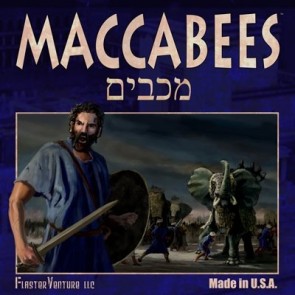 I actually think Gift Guides are bullshit. If I don't know a person well enough to be able to pick out a gift for them without the help of a gift guide, then I don't know the person well enough to give them a gift. I certainly don't want someone giving me something off a gift guide, as the last thing I need in my house is more useless unwanted crap. However, I am making an exception for the Maccabees boardgame, by Flasker Siskin. If you celebrate Chanukah and have children between the ages of 6 - 10 years old, or know someone who does, put Maccabees on your shopping list.

Personally I've been hunting for a Hanukkah themed game for about 6 years now and haven't been able to find one. Yehuda Berlinger designed the Menorah Game several years back, but when he finally found a publisher, they chickened out of the Hanukkah theme and re-themed it as a Frankenstein Monster game. It was released as It's Alive. There is also The Young Maccabees: A Hanukah Adventure Game. I've never played it, but the fact that it is published by a company called Jewish Education Toys and is listed as being for ages 5+ makes me think that this maybe more appropriate as a Secret Satan gift than as a gift to a family that you want to remain friends with.

When you think about it, it is rather surprising that there aren't Hanukkah themed games, because playing games is a Hanukkah tradition. Well, playing one game is - Dreidel. And the Dreidel game, pretty much sucks. For those of you who don't know, it's a gambling game played with a four-side top called a dreidel. The dreidel is like a d4, but instead of numbers, it has a Hebrew letter on each side - Nun,Gimel, Hey, Shin. Each player starts with some fixed number of coins. Every one antes up a coin (or sometimes 2) into the pot. On your turn you put a coin (or 2) into the pot and spin the dreidel. Depending upon what you roll, you take the appropriate action listed below, and then play passes to the next player:

Play until one player has all the coins.

Those of you who have kids can immediately spot the problem with the end game condition. One kid ends up with all the coins. All the other kids cry. Great way to celebrate a holiday isn't it?

However, if everyone starts out with enough coins, say a roll of pennies, the odds are such that the game can go on endlessly with very little money actually exchanging hands by the time everyone decides they are bored and calls it quits. This is great if you have a group of kids, as it can keep them entertained for quite a while. It's brain numbingly boring if there aren't enough kids to play so you have to play with them for more than about half an hour.

The other problem is that all the kids we know heard from somewhere that you are supposed to play dreidel with Hanukkah gelt. A generation or two ago, Hanukkah gelt would have been that previously mentioned roll of pennies. Now-a-day's Hanukkah gelt is foil covered chocolate coins. These coins are more expensive than Realm Coins. Around here, a bag with 5 coins costs about $2. Despite what we tell them, the kids will always try to start a game of dreidel using the one bag of gelt they just received. You will always know this has happened because you will be busy in the kitchen or entertaining your adult guests, and you will suddenly hear a wail from the other room, as some child has lost all their gelt before they even got their first turn at spinning the dreidel. So you have go in, and take all the candy back from all the kids and re-divide it and then suggest they play a different Hanukkah game.

So then you say, "I have an idea. Let's watch Aladdin!"

So you say, "Sure it is. It has… a desert… and the Jews had to walk through the desert… um…for 8 days…umm…4 days to get the oil and then 4 days back. And it was the same desert that's in the Aladdin movie."

By this point you have not only lost all credibility with the kids, but you've also lost your buzz from that nice glass of wine you were having in the kitchen with the grown-ups.

But now, none of this has to happen, because there exists the Macabees game. It's the dreidel game grafted onto a roll and move board game. The object of the game is to be the first person to collect 8 jars of oil. To do this you play the gambling dreidel game to win coins to purchase jars of oil. The key difference is that instead of the players putting up the ante, the ante comes from the bank. This insures a constant flow of coins into the game. In addition to determining how much of the pot you win (or don't win), each player's roll of the dreidel (and we highly recommend that the dreidel be rolled, rather than spun), determines movement around the board. The board has 6 spaces. Each space has a special action which can be performed when you land on it - take another turn, pick a card, challenge another player to a dreidel roll off, get 2 coins, two spaces for buying oil and/or a card. The cards have special actions or bonuses, such as allowing you to add or subtract from your movement, or allowing you to purchase oil at wholesale price. Passing start gives a player a coin, again keeping a flow of coins into the game, so even if you go broke, you won't remain broke for long. More importantly, every time a player passes the start line, there is a dreidel battle in which all players participate by spinning their dreidel in the box lid. Last dreidel standing wins a jar of oil. As you can imagine, the dreidel battles are the highlight of the game.

My only quibble with Maccabees is that the menorahs used on which you place your jars of oil and the jars of oil themselves are made of super thin one-sided card stock. This not only mades the jars of oil difficult to handle, but virtually insures that a young child will tear their menorah. However, since you can pick up the game for $25 or less I really can't fault Flaster for making this compromise to keep the price competitive with other mainstream games. Since playing Maccabees is likely to become a holiday tradition, I recommend picking up some mini menorahs and candles to pimp out the game. Or use four of those bazillion menorahs that have accumulated from the the kids making them every year in Sunday School.

Maccabees keeps the tradition of playing dreidel intact, but without the traditional short comings. It plays in about half an hour, moves fast, and keep everyone in the game and involved. Instead of the game ending in tears or out of boredom, it usually ends with the kids just moving on to playing dreidel battles until the latkes hit the table.

Maccabees is not yet available at many of the on-line game stores, but you can find it at the locations listed on this website. If you are ordering on-line, you should also check out Flaster Ventures two other holiday themed games - Matzakoman (Passover), and Queen Esther and the Dancing Dreidels (Purim). Both are similar to Maccabees, with Matzakoman skewing slightly older and Queen Esther skewing slightly younger. If you need that last minute gift and you are fortunate enough to live near any of the Bed, Bath & Beyond locations listed on the website, you may be a able to pick up the Maccabees game on your way to that holiday party you/your spouse/child forgot to put on the family calendar.