I Summon You To Appear, My Love - Summoner Wars Review 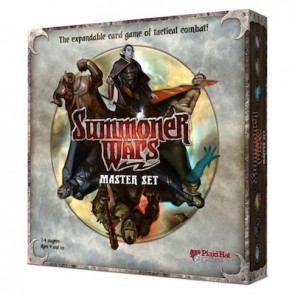 I’ve always been attracted by the idea of a collectible game. I like the concept of a game that remains fresh and alive over the course of several years. It sounds cool to be able to create the kind of experience you want, and to compete against friends who have created their own experience. But in practice, I really don’t have the stomach for a collectible game. Five-dollar packs of cards add up quickly, and many collectible games end up consuming all other games in their path. In fact, I know several CCGers who speak of their time in the collectible world like recovering addicts. It’s like an episode of The Biggest Loser, except most gamers have the decency to leave their shirts on. And don’t get me started on the guy who learns some amazing combo or deck on the internet, and then proceeds to ruin the game for his friends. Even when people aren’t copying some deck from the internet, I have almost zero patience for poring over stacks of cards to decide whether I want three or four copies of Greater Derpstorm in my deck. That means that I will be summarily defeated by the guy who has fine-tuned his deck like a very nerdy muscle car. And that doesn’t even touch on the money pit that is the collectible miniatures world.

And if there’s anything the world needs less than another collectible game, it’s another fantasy game. I like wizards as much as the next guy, and probably more than many. But if we’re going to gripe about dour Euro games with four shades of brown as the player colors, then we should also admit that we don’t need anymore elf maidens with their breasts hanging out of their wildly impractical armor. But then here comes Summoner Wars, by Heroscape cultist Colby Dauch, and it has the gall to be not only a fantasy game, but a collectible one as well. This could only lead to indifference, I thought.

But as Lee Corso would say, not so fast my friend. Summoner Wars may not excite you from my description above. But it’s actually one of the best games of the last few years. And it does the collectible model better than just about any other game out there. It takes its cues from CCGs and tactical miniature games to create something that will appeal to  both crowds while still working for people who just want to dip their toes in it. You won’t be punished for just buying in a little bit.

Here’s how it works. The board is a big grid, divided into two halves. On this battlefield, opposing players will each pick a deck belonging to a warring faction (from a very wide selection, more on this later) and set up on their end of the board. From there, the game has a simple objective: destroy the “Summoner” of your opponent. The cards in the deck mostly represent single units who will be able to attack each other. The player will also be able to bring out new units by using magic. How do you build your magic? There are two ways. An enemy unit that you destroy will end up in your magic pile, but you can also just discards cards into your magic pile directly. Players have to be careful when discarding, since you will not get the opportunity to reshuffle your deck. But you want that magic to get out your more powerful units (called Champions) on the field. Each side also has event cards, basically special power cards that will give a one-time boost to their faction.

The combat is simple but very cool. Each unit has an attack value, and that’s how many dice they roll against the enemy. Dice hit on 3 or more, which means odds are that the attack will be successful. The result is a game with a high body count and wild swings of fortune. It’s not rare to lose all of your common units in a single turn. And dice being dice, they will fail at highly inopportune times. So the real meat of the game is where you have the most control: positioning your units effectively, and budgeting your magic. Each unit type also has a special ability (like increased range, or attack bonuses), and watching the factions interact with each other is very satisfying.

I’m a huge fan of any game with asymmetrical setups. Factions and unique player powers are one of the best ways to ensure your game will have lots of variety. But it’s easy to screw up, especially when a game starts expanding. Since Summoner Wars has already expanded quite a bit, some may question how balanced the different factions are against each other. There are 14 factions out already, and after some 20-30 games, I haven’t seen one dominate any other. The swingy combat means that even strong units aren’t invincible. And the costs of the champions feels right in my experience.

It’s genuinely amazing how Dauch was able to craft a game that draws from such fertile territory without falling into the most common pitfalls associated with these types of games. Tactical miniature games can get bogged down in terrain modifiers and line of sight calculations. Summoner Wars avoids that by just sticking to a basic grid, not using the diagonals in determining adjacency, and capping range at three spaces.  All of the overhead and measuring is out the window. There’s still variety and tactical considerations, but it’s almost totally built into the factions.

I called Summoner Wars collectible, but it would be more accurate to call it expandable. You don’t need more than a single set to play, and a person who only buys a single set won’t be frozen out of competition. The balance we talked about earlier means that the other factions fight very evenly against the others. You don’t need to buy things to keep up, you buy them because it makes the game more fun. Still, the game is almost 3 years old, so there is a lot of stuff to keep up with. Here’s a quick guide.

There really isn’t much to complain about, but I’ll do my best. The fantasy theme is pretty warmed-over, but it’s not intrusive. I don’t like that most factions are some variation on Elves, Orcs, Goblins, or Dwarves. Then again, the artwork isn’t particularly gruesome or adolescent, so that’s a blessing. Some of the art does look pretty bland though, particularly closeups of the Summoners. On the components side, there have been some serious issues with consistency of cardstock. I don’t think any two releases have felt like they came from the same source. I believe there has been some drama surrounding this game’s printer, so it’s understandable. But those who like to build decks might be frustrated with the streaky quality.

But in the end, who cares? This is a really smart game, both from a design and a business standpoint. And if I failed to point it out before, it’s also a lot of fun. The games are tense and dramatic, and once people know the factions it moves quite fast. It’s easy to get together with a friend and play 3-4 games in a couple of hours. It’s simple enough that you could play it with kids, but engaging enough for serious gamers too. It’s grown into one of the most reliable franchises of the last few years, and I hope that it continues for a while, because the possibilities are very exciting.