1812: The Invasion of Canada Review 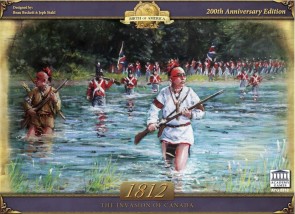 Game Name
1812: The Invasion of Canada
Publisher
Academy Games
Designer
There Will Be Games

I love this game.

It is practically the essence of pure unadulterated beat em up, wrapped in a odd wargamey look, but with funky dice, the best new combat system in years, and some nifty event cards.

A very wide hard map of northern US and Canada. Cards on linen stock, a few tokens, and about 15 custom dice in 5 colors. And your troops are cubes. It is a pure dyed-in-the-wool AT DOAM game with cubes.

In practice, I'm not minding the cubes. There is only one troop type per faction, and they end up being much easier to deal with the having to stand up the plastic figures. You just drag them along in little groups and never are stuck between trying to stand them up again or leaving piles of plastic bits in a space. We've seen some large roving armies of 15 troops, and the board is practically covered in them at the start.

The game has perhaps 4 pages of rules, and really begs for exactly 5 players. They are divided into two teams (American Regulars, the crappy American Militia, the crappy Canadian Militia, Brits, and Indians.)

The object resembles the very abstract Battleline. Take more of their key points than they've taken of yours. This takes between 3 and 8 round, and ends when one team has played all of their "Truce" Cards.

During a round, turns are done in random order (I've always adored this mechanic, not enough games use it.) by drawing from a bag. A player plays one movement card and optional special nifty cards. The movement cards specify a number of armies to move a number of spaces.

An army is as many of your guys and allies in a space you want to move.

Each player has 2-3 custom dice, which are different for each faction. Roll one die per unit to a maximum of 2 or 3. There are three results:

2. Optional retreat one unit to let it fight another day

3. RUN AWAY!!! Your own unit is demoralized and leaves the map to reform at the muster point along with reinforcements on your next turn

There is so much good here in such a simple system. The limit on number of dice thrown mean that you want mixed groups. And the tendency of the Militia troops to run away means you want to take hits with them, but still want to keep some around in case they can do something useful. And the optional retreat means that you may want to start leaving a longer battle if you think you might lose, because you cannot just move everything back.

In practice, you could almost start the game from what you've just read. There are some details, and a bit of chrome here and there, but only a handful of extra rules.

1812 reminds me a lot of the style of Memoir '44 Overlord scenarios. The team dynamic is definitely present, and the fact that the game encourages mixed groups in combat reinforces this quite nicely.

And while the game can totally be played at the pitchers of beer and pretzels level, there are some actual wargamey choices. It helps to play to your special cards, as each faction has their own tiny deck with unique specials and movement card mixes.

First of all, it jumps up and down and screams for 5. With fewer players, all factions still go, so someone has to take multiple factions. It isn't a complex stretch to see two people playing, but they miss out of the social and team aspect. 3-4 seem a little silly

I also wonder about balance. It seems like everything is stacked against the Americans. They only get 2 turns to the Canadians 3 each round. They get reinforcements further from the main line of battle, and they start with more troops away from the border. The Canadians start with a definite advantage, but seems to drop over time as the Americans bring more troops to bear.

The really wide battleline and the card variability is going to keep games from being too predictable. Perhaps I'm just not sure how to approach the American position yet. Or the crappy American Militia always keep running away. Really, the white guys are absolutely awful in an almost hysterical fashion.

It is just such a fun game that probably appeals less to Grognards than to people who like to roll dice. The die system is great, and the game plays in 30-120 minutes. So far, my 3 plays have felt relatively different.

I'm not sure I'd want to play a whole series of these, as there is a slightly abstract nature here that would require some hefty reworking to make it feel different. Still, I'd really want to at least look at anything else they do with it, and I'm now wondering why the heck I haven't played Conflict of Heroes. It's awesome, isn't it?