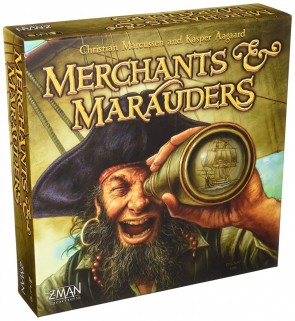 The smell of the salt breeze. The creak of rigging in the air. You’re in sight of the port of Tobago, when you see a ship off in the distance, on an intercept course. Word from the crows-nest is that the ship has run up the fleur-de-lis. The French Navy! You order the crew to man their stations and load the cannons. As the larger ship draws closer, volleys of fire are exchanged, shattering masts and shredding sails. All at once, grappling hooks sail from the enemy ship. They’re trying to board! As the enemy pours onto your ship, your crew fights to the last man. Will you survive long enough to protect your precious gold and valuable cargo?

I sure didn’t. That exact paragraph happened to me the last time I played Merchants & Marauders, and it didn’t end well. The French frigate got the better of me, and my captain went down with the ship. Fortunately, I had a card that let me save my ship for my new captain, so I didn’t have to start again at square one. I ended up winning, but that’s not really the point. The point is, I remember what happened to me not in terms of the mechanisms of the game, but in images and actions like the ones I described above.

Merchants & Marauders is a game that feels like it was designed with me in mind. Like Battlestar Galactica and Fury of Dracula, it removes you from the context of a game and puts you inside a story. As the mechanisms fade into the background, you are swept away in the journey. This is precisely the sort of game that I lap up, and it pulls it off famously. Each player takes the role of a captain. Depending on the individual stats of your captain, you will have several opportunities throughout the game to choose whether you want to be a law-abiding merchant or a swashbuckling pirate. Captains travel around a map of the Caribbean, arriving in various ports to exchange goods, buy add-ons to your ship, recruit crew, or maybe listen for a lucrative rumor. While at sea, you can attack passing merchant ships for plunder, or you may encounter enemy ships, either non-player pirates or naval vessels. A variety of achievements will net you a Glory Point, and 10 GP wins the game.

The first thing anyone will notice is the production. I am not normally one to comment heavily on components, but this game looks terrific. With nice plastic ships, thick cardboard coins, and even little treasure chests, it’s a game that tries to make your eyes pop. Likewise, the board is sumptuous and lovely. There is tons of information to digest, but the design does a terrific job at conveying it all. The board is loaded with various tracks and special powers, but never looks crowded or sloppy. And there are also four player aids, all a foot square and double-sided. There’s a lot of stuff to take in, and it can be intimidating, but usability here is through the roof. It’s easily one of the best-looking games I’ve ever seen, right down to the dice, which look like they might have been stolen from a pirate ship.

The rules look overwhelming, and indeed they are long. But if you’ve ever tackled something like Arkham Horror you can definitely handle this one. There’s a lot of separate mechanisms to grasp, but they mesh very well. Like Arkham Horror, Merchants & Marauders utilizes skill checks where you roll however many dice and look for successes, here represented by little skulls. Pretty much everything you do will require some kind of skill check, so the types of skills your captain possesses will often dictate your strategy. The most impressive thing is that it never overwhelms. There is a pile of stuff to know and remember, but the player aid does a marvelous job of keeping new players straight. It should take no more than a turn or so for players to be cruising around the board with almost no problems.

Of special note is the ship-to-ship combat, easily the most complex aspect of the game. I won’t explain it all here, but suffice to say that it involves selecting an action, then rolling the same skill check to see who is most successful. The winner gets to execute their chosen action, which may involve firing cannons, fleeing, or boarding the other ship. If boarding is successful, that initiates a completely different kind of combat that represents the crews fighting in hand-to-hand combat. It’s hard to keep straight, and not a lot easier to explain. But once we had it down I really loved it. It presented some fun tactical choices (should you board, or try to get off another volley of cannon-fire?), and really emphasized the narrative of the game. I especially like it when the game gets into crew combat because at that point the stakes are very high: losing crew combat means your captain dies, and you must start over with a new captain and a new ship. It reminds me of something that would be in a game from the 1980s, somewhat arcane and complicated for the sake of narrative detail and excitement. It’s also a great way to involve the other players. Since most combat takes place against NPCs (non-playable captains, or captains that are controlled by the cards in the game), the NPCs are played by players for battles. They get to make a lot of nasty decisions that will directly affect their opponents. It keeps people involved in what would otherwise be a slow point. I always look forward to combat, because it’s where a lot of the best stories here come through.

And oh what stories they are. I’ve seen some amazing stuff here. Once a player saved a group of ladies from being burned as witches, and then had the choice to release them and get a reward or keep them aboard and use them as “enticement” for recruiting crew. In my last game I put down a slave uprising (boo! hiss!) and had the choice to either steal their ship or get a reward. The cards provide little details that go way beyond mere flavor text. This game does not form narrative simply by telling you what happened, it does so through the actions of the players.

But what I really love about the game is the obvious love and care that went into it. The designers shopped the game to publishers for several years, and at least one publisher agreed then backed out. Finally Z-Man Games finally took them up on it. It has the feel of a game that has been fine-tuned, where everything is thought out and in its perfect place. There’s a palpable sense of joy when playing, and I must applaud Kasper Aagaard and Christian Marcussen for a game that is clearly made with heart and soul instead of dry calculation. Their enthusiasm shows through the entire thing, and it’s infectious. There are a lot of little details that are just perfect. It’s a game that rewards planning and strategy, but always emphasizes fun and excitement. It’s a game that is balanced very well, but only after players have taken the time to plunge into the deep end and let themselves lose a couple of times. And losing badly is still an enormous amount of fun.

I could go on and on, but let me sum up like this: this is the best narrative I’ve seen in a game since Battlestar Galactica. It deserves to stand besides other classics in narrative games like Fury of Dracula and Merchant of Venus. Here we have the perfect example of what game design is really capable of, and the result is the best pirate game I’ve ever played, and perhaps the best pirate game that’s even possible.