Once Upon A Time Review 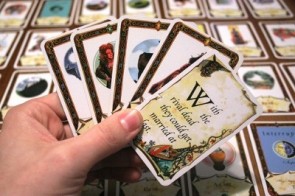 I’ve always been interested in storytelling. I even tried to make a reputation as a teller of tales once upon a time, only to discover I didn’t quite have the theatrics for it (which will come as a shock to anyone that knows what a drama queen I am). But recently I’ve become more interested in the actual mechanics of it, what makes a good story, and particularly what makes a good interactive story whereby the participants can feel they’ve had a genuine say in the experience without allowing their contributions to derail the story itself. And seeing as some of you voiced an interest in reading some reviews of older games you may not have heard of, it seemed an opportune moment to take a look at Once Upon A Time.

Originally released in 1993 and still very much in print, Once Upon A Time isn’t really a game at all, more of a card-based structured activity, but since that’s rather a mouthful we’ll stick with game for the time being. There are two decks of cards, a small deck of “ending” cards which contain a paragraph suitable for ending a fairy story and the much bigger story deck. The cards in the story deck have a story element on them such as “sword” or “disguised” or “storm” and an icon representing the category this element belongs to - in the case of the cards mentioned these would be “item”, “aspect” and “event” respectively. The framework is very simple: players get one ending card and a hand of story cards, one player starts off telling a story and every time they manage to name-check something that’s on a card they hold they discard it. If you can empty your hand of cards and conclude the tale with the paragraph on your ending card, you win. Simple?

Well not so much. Other players get to take their turn by interrupting the current teller, at which point they have to add another story card to their hand and yield the floor to the interrupter. The most common way to do this is simply to play a special “interrupt”-type story card that matches the symbol on the card the teller just discarded. But you can also interrupt by laying a standard story card that matches something the teller incorporates into their story. You’ll immediately see that the whole game revolves around the highly unscientific process of deciding whether a given vague semantic concept justifies a genuine “match” with another vague semantic concept. And being a gamer you’ll shake your head in wonderment at what is clearly going to be a futile exercise in rules-lawyering for its entire duration.

And it’s on this particular dime that your entire perception of this game is likely to turn. In my experience this does not happen. In my experience what happens is that a group of relative strangers come together in an almost magical manner and through a quite bizarre and enchanting mixture of co-operation and competition, collude to weave tales of extraordinary imagination that are often wondrous, occasionally nonsensical and always very funny. But then again I make a point of trying not to game with empty husks of people who’d be quite happy to suck all the joy out of a group experience in order to make an academic point about the quality of rules or chalk up a meaningless victory.

Just to prove that there’s a dried-up prune of a logical being at the core of my being somewhere, I have to point out that there are logistical issues with the game. In terms of story, it’s perfectly playable with any number, but in reality with two players you have such large hands that it’s difficult to actually remember what cards you’ve got to interrupt successfully, and similarly with larger groups it’s possible for the game to end with one or more players not having had a turn. But again, in my experience, no-one cares. In my experience players are normally so entranced by the tale that’s unfolding before their very eyes that they don’t take a whole lot of notice of what they’re holding even when playing with the ideal of 3-4.

Of course, playing Once Upon A Time takes rather different skills to those which most gamers are used to, or even possess. You have to have imagination, flair, and a sense of dramatic timing. It helps to be a bit of an extrovert. But here’s another magical thing that the game manages. As long as there are one or two people at the table who can bring at least a little of all these attributes to the table, they become infections. Other players come out of their shell, find their creative juices start to flow and join in with the fun. Soon, it becomes second nature to be trying to weave a tale one step ahead of your cards instead of planning the logistics of invading Russia or pleasing a faceless Renaissance noble. And when the infection starts to spread the result is surprisingly engaging stories. Real stories. Stories that would be good enough, if written up, to collect into a book to read. I recorded a couple of sessions with the intention of doing just that. I’ve never found the time to actually carry it through, but it illustrates that even if there’s only a tiny drop of the necessary ingredients to begin with, genuinely enchanting tales can eventually emerge from the chaos.

It should be noted for fantasy fans that Once Upon A Time is very focused on heroic fairy tales. You’ll have to work very hard if you want to make the cards fit a heroic high-fantasy mold, such as Tolkien might provide, and often the concepts in play won’t co-operate at all and you end up retelling something that would pass for a children’s fairytale. I do find this a little disappointing, but you have to remember this was aimed squarely at a family audience (with older kids - you have to be able to read fast and juggle multiple concepts in your head to play) rather than niche hobby gamers. To try and ameliorate this problem I picked up the expansion Dark Tales which adds more story and ending cards with a much more sinister twist. While some of the material is fairly grim, it doesn’t entirely work to force base game down that path, since some of the expansion cards are neutral in tone and combined with the light-hearted nature of the original, the nastier cards are totally swamped and pop up more as isolated shock elements in an otherwise family-friendly story. There are enough cards in Dark Tales to be playable on their own - I haven’t tried this, and whilst it would certainly make for a much darker experience, it seems a shame to deprive the game of so much of the variety and unexpectedness on which it thrives and for which I value the expansion very highly even though it didn’t quite “fix” the game in the way I’d hoped.

I absolutely love Once Upon A Time. I played it mainly with my lunchtime work group when there more than two of us: we could fit in two or three games in an hour and the experience was never less than hugely uplifting and would often end with us in such hysterics that straight-laced colleagues would knock to find out what the matter was. Now we are two, I miss it. But I do have to offer one final criticism. To return to the point I made at the beginning, Once Upon A Time is not a game. To enjoy it, the group has to strike a careful and tender balance between the competitive need to interrupt and make the story flow back and forth between different players and cooperative art of making sure the whole tale remains believable and fun. And not everyone can, or wants to, do that: you don’t have to be a soulless husk of a gamer to believe that solid, red-blooded competition is the be all and end all of gaming. But be warned, if you play Once Upon A Time to win, you - and your whole gaming group - will certainly lose