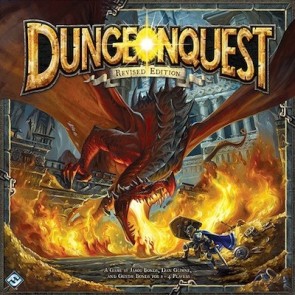 A lot of games today are difficult. I remember the first time I played Agricola. The constant pressure to accumulate food was like a cracking whip, driving the game forward come hell or high water. Used properly, innate difficulty in a design makes for a lot of good stuff. It can add tension and really juice up decisions in-game. But when it’s overused it can be a drag. Euro designs are often guilty of this. I have a friend who loves the games of Stefen Feld, but most of his stuff leaves me cold for this reason. It’s just not much fun for me to eek out a couple of extra gold to take a slightly more powerful action. Oh hooray, I lose a little less ground than usual this turn. It’s getting bad in more American designs too. Games like Middle Earth Quest and the Lord of the Rings card game both give the rack an extra crank. You spend as much time struggling against the game as anything else. This is true even in games that aren’t cooperative. It becomes an question of who can manipulate this system the best, and I’m just not very interested in that.

Well, DungeonQuest is hard. But not hard, like you could actually get better at it. No, DungeonQuest is unfair. It hates you and is deaf to your pleas. Players each take the role of a foolhardy adventurer, intent on entering the treacherous dungeon to raid the lair of the dragon at the middle of the board. On your turn, you can draw a tile that represents a new room, or you can search the room you’re in. A new tile might be an empty room, a dead end, or any number of dangerous locales. When you enter a new room, you draw a card to see what happens to you. You might have to fight a monster, or you might get some treasure, or a swinging blade might just slice off your head. And there’s no extra lives in this game: when your adventurer dies, you’re out of the game. There are also ways to travel in the catacombs beneath the dungeon, although there’s no telling where you’ll come out of the tunnels. As likely as not, you’ll overshoot the dragon’s lair and end up on the opposite side of the board. Assuming you don’t die on the way. DungeonQuest distinguishes itself by providing myriad ways for adventurers to perish. The player who gets the most loot and escapes alive wins, but it’s more likely that everyone dies and no one wins. If that wasn’t enough, there’s also a time track. If night falls while people are still alive in the dungeon, the dragon wakes up and eats them.

In case you can’t tell, about 90% of DungeonQuest is based on sheer stupid luck. On any given turn, there could be about 3 ways that you could randomly lose health, either by a bad tile draw, a bad card, or lousy dice rolling. And luck being luck, it will always fail you at the worst time. I once got all the way to the dragon’s lair and got some good loot. On my way back, I spent three turns fighting through a giant spider web. Upon escaping, I promptly fell down a bottomless pit. Game over.

If you find that kind of thing funny, then I think I have the game for you. For my own part, I think it’s hilarious. As a matter of fact, I’ve only had DungeonQuest a little over a week, and I’ve already played about 7 times. It’s a compelling game because each time is like gambling. There’s this compulsion to take stupid risks just to see what happens. You’ll probably die, but there’s that slight chance you’ll miraculously escape with some treasure. That small chance makes this game insanely addictive.

But there’s something greater at work here than just silly risk-taking. By taking the control and choices away from the player, DungeonQuest allows the players to focus on the story and the blow-by-blow misfortune that happens to their adventurers. The game has a laser-like focus on narrative and fun, and it succeeds wildly. If it took any longer, the game might fall apart. But the entire thing is over in about 45 minutes, give or take. Sure, you may die on your first turn. But you won’t forget about it in a hurry. Actually escaping the dungeon is a cause for celebration. I’ve even heard of groups letting people who win sign the inside of the box lid.

DungeonQuest is currently available from Fantasy Flight Games, but it’s actually the third printing. Originally published in Sweden in the early 1980s, the game was picked up by Games Workshop back when they still published board games. That edition is the one that most people remember. I’ve never played the original, but FFG has made a couple of very large adjustments to their own version. First of all, some elements from the original game that were only available in expansions are now incorporated into the whole experience. More drastically, FFG introduced a completely new combat system. Essentially, each side has a hand of cards. You pick one, and the high one wins. However, there are a couple ways for characters to land some extra hits on their opponents, either by counter-attack or a “deathblow.” It takes up about a third of the ruleset, but for me it works fine. Fans of the original game however will probably balk at it. It’s definitely more complex than combat in the old game, which boiled down to a fancy version of simply rock-paper-scissors. When this edition came out, there was a lot of howling over the new combat. The biggest reason was that FFG didn’t provide a way to recreate the original combat in the box. There was eventually a way published in a variant, but it was too little too late. Me, I like the new combat. It feels like one of the few places where the game isn’t totally playing you. Sure you may die on the very next turn, and the combat itself is still pretty random. But it’s nice to at least have the illusion of control. It’s a little more complex, but the original combat feels like it swings too far in the other direction. Pick whichever method you like, it’ll work fine either way.

A more cosmetic change was to the setting of the game. Fantasy Flight elected to put DungeonQuest in the Terrinoth universe, as used in Runebound, Descent, and Runewars. This strikes me as an odd choice, since those are all complex long games. DungeonQuest is much more of a goof-off. The shift in setting creates some false expectations about this game, and I imagine a lot of Terrinoth fans were turned off by its silly nature. Not only that, but the changes to combat antagonized fans of the original game. So I’m not sure who they were marketing this game towards. The setting also results in a slightly more serious look than it probably deserves. It’s funny in an overwrought way, but the art should really have been less Brandon Sanderson in style, and more Terry Pratchett. But the production is otherwise really good. The artwork is solid if average, and everything is very high quality. They even went the extra mile by including extra cards for the characters, so that they can be used in the other Terrinoth games. They just take up space for me, but fans of the setting will be happy.

In marketing terms, this one is neither fish nor fowl, so I suspect it hasn’t sold very well. It’s too bad, because I would love to see some expansions. This is the sort of game that would be fun with more people and more encounter cards.Still it’s definitely a terrific game right now, although it might be a hard sell to some people these days. It’s so goofy and irreverent that I suspect a lot of people will just think it stupid. But people who can’t enjoy a game of DungeonQuest now and then probably aren’t all that fun in the first place. I’m glad I didn’t let this reprint’s controversy scare me away, because I’ve kind of fallen in love with it. Try it yourself, and you may find that it’s the only dungeon-crawl you’ll ever need.