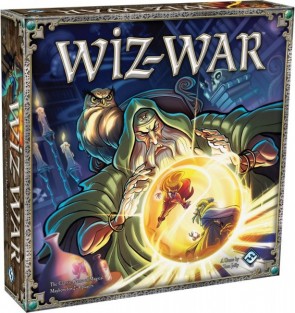 No doubt many of my readers have read and enjoyed the Harry Potter books. Remember the final sequence of the fourth book? Harry is one of four champions in the poorly-named Tri-Wizard Tournament, and the final ordeal is to plunge into a magical labyrinth. In the labyrinth, nothing is as it seems. The walls shift, the atmosphere plays tricks on him, and  his sense of direction abandons him at inopportune times. Not only that, but the other competitors keep running into each other, slinging spells and hexes at each other in an effort to grab the Tri-Wizard Cup. It’s an all-out four-way battle between wizards, and that’s pretty much what Wiz-War is.

Of course, there are some key differences. Instead of dramatic and atmospheric, Wiz-War is goofy and cartoony. And instead of a central point where all players must go, there’s a home base for each wizard which contains two treasures. If you nab two treasures from other wizards and bring them back to your base, you win. But like that pivotal scene in Harry Potter, nothing is very reliable. The board will sometimes rotate. Walls will suddenly crop up and just as suddenly vanish. Players will transform themselves into magical creatures, throw fireballs at each other, and make use of some good old-fashioned mind control. This is a realm where chaos and insanity reigns supreme.

If you’re anything like me, you read that description and thought, “That sounds AWESOME.” And it mostly is. Wiz-War is, to put it mildly, completely bananas. Planning has no place here. You have a hand of cards that represent spells and magical items. You cast those spells and activate those items to give yourself whatever short-term advantage you can. Unfortunately, it’s not just your treasure that’s in danger. The other wizards will be just as happy to unleash their magical aggression at you, and to paraphrase Sirius Black, people die in this maze.

Actually, it resembles nothing so much as a good take-that game. You know the kind. Your turn comes, you play a bunch of nasty cards on the other players, and the next guy goes. That’s a somewhat reductive description, of course. First of all, most take-that games don’t have such a strong physical component. That makes a pretty big difference, because it removes a lot of inherent abstractions that are usually made in this kind of game. You have a dude on the board, and he’s attacking another dude on the board. Secondly, most take-that games have an degenerate habit of just going on and on. If you’ve ever played Munchkin, odds are you’re still playing that same game. But Wiz-War is over very quickly. I haven’t yet seen a game cross the 45 minute mark, and it’s usually closer to 20-30 minutes. It’s a lean mean wizard-bashing machine.

The best thing about Wiz-War is its straightforward nature. The actual structure of the game includes all of three rules. Move your dude, play some cards, grab some stuff. There are other details, but they are just that: details. It’s very direct, and because of that there is enormous potential for a fun game here. It’s best played with the type of people who will not be shy about taking cheap shots, trash-talking, and generally behaving like jerks. If you are an outgoing bunch then Wiz-War is a great addition to your game nights. It can be picked up very quickly, set up fast,  and you can burn through a few games in a sitting without anyone minding. It’s hard to not get swept up in the silly competition, because the game just gets out of the way so well. Nothing in the game prevents abusing the guy in last place, ganging up on the guy in first place, or just sucker-punching people for the fun of it.

The flipside is that the game doesn’t really endear itself to those who aren’t disposed to it. That can be said of a lot of games, but I think it’s kind of a problem here. If you have a quiet group who likes to analyze and read everything before making a decision, Wiz-War just isn’t worth the trouble. It may be tempting to spend a lot of time and energy reading what all your cards do, but trust me when I say it’s just better to throw stuff out there and see what happens. There isn’t very much “game” there, as it were. There will be groups who play a game or two and think “is that it?” Depending on who you play games with, this may or may not be a dealbreaker. I have a very wide variety of gaming buddies, so I can find folks to play this one without much trouble. Still, new players should be aware that this one is largely a vessel for interacting with others.

My other problem is that I could go for an even more insane game. It feels like the game isn’t as bonkers as it wants to be. It might be something as simple as just bringing in a couple more players with an expansion. I know that’d work for me, because this game is definitely for as many people as you can get. Since that number tops out at four, an expansion would be welcome and is probably in the works. There are also a couple of “optional” rules that I have considered using, such as allowing players to have as many active spells and items in front of them as they like. It’s a flexible game that way, so I’m sure I can tweak my way to the sort of experience I want.

Wiz-War is one of the latest in the long line of classic games reprinted by Fantasy Flight Games. No doubt that brings up a lot of complicated feelings in gamers, but I think they did a good job here. I don’t have any experience with the original game by Tom Jolly, but it looks like they mostly left it alone. Any rule changes can be reversed easily, and they’ve provided most of the old rules in the back of the rulebook. Graphically, I think this is one of FFG’s best games since Fury of Dracula. Rather then going all serious and overwrought like they are wont to do, the illustrations here are cartoony and funny. It’s a colorful and appealing package. The cards have a bad case of icon-itis, but the icons are pretty simple to explain and understand. It clutters things up, but that’s the only misstep. They even had the decency to give an alternate set of player boards. Some players may be turned off by the interactions of the cards, which can result in some bizarre rules discrepancies. Like Cosmic Encounter, that’s part of the devil’s bargain here. You want Wiz-War? You probably want rules arguments as well. But then I’ve always downplayed rules disagreements and problems with card interactions. Stuff like that just doesn’t bother me very much.

Wiz-War is very simple, but that simplicity keeps it afloat. There’s nothing there that will get in the way of a good time, and that’s what has impressed me most about it. Its barely-there nature will sink it for some groups, and indeed has done so for me a couple of times. But I keep enjoying it, and I keeping wanting to play another game. That’s all the proof I need that there’s some kind of magic at work here.