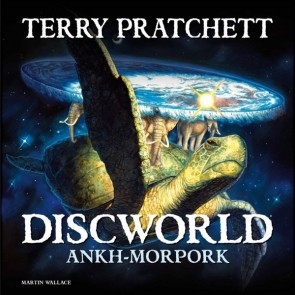 I made a strange realization a week or so ago. For all of my Ameritrash leanings and pretensions, I usually like games by Martin Wallace. Wallace usually designs dense economic games with drab names that only conjure images of furrowed brows around the table. But heaven help me, I enjoy his work. I’ve been playing Brass with some friends online, and when I combine that with my face-to-face experiences with the game I find that it’s becoming one of my favorite heavy Euros. I enjoyed Last Train to Wensleydale as well, though I would need to play it a second time to make sure. I don’t love everything he’s done, of course. I’m not a huge fan of Steam (though I want to try the older Age of Steam to make sure), and Automobile showed me how frustrating and dull his games can be. But of the Wallace games I’ve played, I like more of them than I hate. He’s especially shown himself to be gifted at lighter fare, like his older game Way Out West and the criminally rare Moongha Invaders.

But no one could have told me that he would be the man to make a quality boardgame based on Terry Pratchett’s Discworld novels. Though I’ve never read them, I’ve always understood that Pratchett’s novels are instilled with a sense of anarchy, combined with dry British wit. In my head, that makes them a bad fit for Wallace’s usually more reserved and severe outlook on game design. Not only that, but there are (currently) 39 novels in the Discworld series, covering all sorts of different characters, themes, settings, and styles. For any game to attempt to capture that feels like folly. But to my surprise, Wallace is up to the challenge. Discworld: Ankh-Morpork is an approachable game that has a good shot at being a hit with fans of the books who have never darkened a game-store door. But if, like me, you have no experience with Discworld, have no fear. You can still play and enjoy this game.

That second part is probably the more impressive achievement. It’s one thing to make a game that will work for acolytes. Fans aren’t always very discerning with their favorite properties, or at least not discerning enough to not put down the money either way. But there’s a much bigger population out there that has no interest in Discworld, and Wallace actually finds a way to make the game fun for them too. Fans of super-thematic games might be let down that the game is actually pretty abstract, but that was the right move. This is a shot aimed at the people who buy all their games at Barnes & Noble, people who are probably not familiar with hobby games at all. And since every fan likes to spread their fan-hood, it’s good that the game is enjoyable by outsiders.

The board shows a map of the city of Ankh-Morpork, divided into twelve districts. Each player has a hand of cards that allows them to take actions on their turn. You might place a minion on the board in an effort to control different districts. You can build a building in a district to receive a special power from that location. You might find a way to make some money, or to mess with your opponents’ minions on the board. Each player is given a special goal at the beginning of the game. If you attain your goal at the beginning of your turn, you win the game. One person may try to control a certain number of districts, another player may need to earn so much money. Another goal makes its owner win when the deck of cards is exhausted. The lion’s share of tactics comes from figuring out what your opponents are trying to do, and doing your best to prevent them from doing it.

The structure of Discworld: Ankh-Morpork itself is very straightforward. You basically play a card and draw up to the hand limit. And unlike a lot of other games, the cards themselves are actually very simple to parse out. They have a minimum of text and the symbols make their purpose very clear. Despite this simplicity, I’m impressed at how varied the game can be. My first game was between me and two gamer friends, very contentious and full of double-guessing. There weren’t a lot of guys on the board, and we pulled on each other very hard. The other games I’ve played have been with a more casual group. One of them was a landslide loss to my wife. I was able to figure out what her goal was, but by that time it was too late to stop her. And my other game had a ton of guys on the board, with random events that would make wild swings of luck. All three games had a very different feel, but all three were fun. There’s enough variety in the cards to make sure that the game will play out differently each time. It adapts well to thinkers, because the double-guessing and area-control aspects are quite solid. But it also works with casual players, who just like to have fun and mess with each other. Not many games can find their niche at two different levels, but Wallace pulled it off.

Having never read the Discworld novels, I couldn’t say how well the game captures that world. The cards each represent a specific character in the series, but since most of them only have a few symbols on them they don’t feel particularly tied to any personalities. There are a lot of great production touches that draw from Pratchett’s work. One that I particularly like is the absence of the number eight, a number that holds some sort of bad juju in the series (don’t ask me why). On the D12 included in the game and on the board the number 8 is designated as “7a,” and as “the number between seven and nine” in the rules. I do know that my friends who like Discworld have found the game to be charming and fun. For my own part, it at least conforms to my idea of what Discworld should be. While Wallace’s steady hand is evident, the attitude of the game itself is silly and broad, and that feels appropriate.

No small part of this is due to the production and design. The illustrations on the cards are absolutely terrific. The faces are expressive and occasionally grotesque, and character just oozes out of them. I haven’t the foggiest idea who Moist Von Lipwig is, but I feel like I know his character just from looking at the picture on his card. The rest of the game has a really clean and appealing look, right down to the wooden pieces and the afore-mentioned die. And for once, a game loaded with action symbols is actually very simple to understand. The icons are all very obvious, and the included player aids clear up any remaining ambiguity. Everything seems designed to make the game run smoothly and painlessly.

It’s definitely the sort of game where you need to roll with the punches. You might have a goal that just doesn’t work with the cards you are dealt. If you can’t get some kind of income from your cards, it’s going be hard to win as the guy who needs to make money. And sometimes, random crap happens and will kick you to the curb. But unlike other Wallace games, it doesn’t feel harsh or unforgiving. It simply feels appropriate. If anything, I’d like a game that felt even wilder. It’s not like that wouldn’t work in this context. Then again, Wallace has to be true to himself. He’s not one to design something quite that loony, and he’s already come up with a darn good game as it is. The highest compliment I can pay is that I am now curious about the novels. It’s a game that invites people into the fold, rather than sealing out the non-believers.