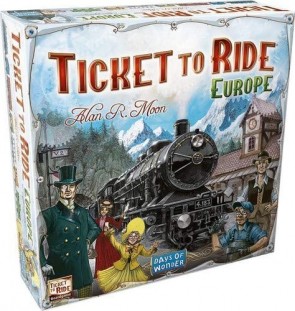 Let’s travel back in time to the fall of 2007. That was when I first got into board gaming in a serious way, and I was smack in the middle of my “buy-everything” phase. Among my many purchases was a game that most nascent gamers buy, Alan Moon’s Ticket to Ride. I liked a lot of games, but I genuinely loved Ticket to Ride. We played it at every game night, almost without exception. It was the game I was known for playing, my absolute favorite. So it was not a surprise that for my 25th birthday, my future wife bought me Ticket to Ride: Europe. So began my collection of most of the Ticket to Ride line. I bought the Switzerland expansion map, the 1910 expansion for the original game, and the third version of the original game, Ticket to Ride: Marklin. I even got the card game version. I was neck-deep in Ticket to Ride, and I loved it.

But as we all do, I moved on. In late 2008 and early 2009, I discovered Ameritrash games, particularly Cosmic Encounter and Battlestar Galactica. Suddenly the family-style Ticket to Ride games felt rather quaint and reserved. There was no sense of narrative or drama that I now discovered I really loved in games. And besides that, I was rapidly learning that unless you really love a game, it’s never worth owning more than one version of it. Having four different versions of Ticket to Ride meant that none of them got played all that much. I began to slowly trade away the various games, and I wondered if maybe my time with this simple train game was at an end. Eventually, there was just one Ticket to Ride game on my shelf, and that was Ticket to Ride: Europe, with the Switzerland map tucked in the box.

This is usually where I take a moment to explain a game, but odds are it’s not really necessary in this case. (But it’s not like that will stop me.) It’s the same rummy-like gameplay from the original. You collect sets of colored cards to occupy different spots on the map, in an attempt to connect different cities and complete routes listed on your ticket cards. The Europe map introduces a couple of new wrinkles to the game. The most obvious is the board itself, which is now a map of Europe. There two new types of routes, tunnels and ferries. Ferries require a certain number of wild cards, and tunnels require a flip of three cards to see if any of them match the cards you are playing. If they do, you will need to pay some more cards of that color. There are also little train stations which allow you to get into a city using someone else’s route. My favorite change is one with the tickets. The six 20+-point tickets are dealt separately to the players, so that each person is guaranteed at least one long ticket.

The general feel of the game is one that is more balanced and even. Usually I think that’s a bad move, but Ticket to Ride was never a game where interaction and screwage are a big factor. A bad draw on tickets had the ability to sink you in the original game, if you only got routes running north-to-south. The increased balance makes the game feel a little less luck-dependent and a little more open to changing strategies. The Europe map is also a little more crowded in the middle. There are more small-point connections on this map, and far fewer big “jackpot” routes. The long routes that are there are mostly along the periphery of the board. That means that it’s a lot more difficult to just rack up points from connecting cities around the board. The stations also give an option to someone who has gotten crowded out of a city simply because they were the last ones to get there.

But even as its more balanced, I suspect that the game is also a little more competitive. Because the map is more radial and less grid like, almost every ticket has to go through the middle of the board. That means you’ll be racing as fast as possible to get those valuable center routes, and you’re much more likely to get in each other’s way. And as in the original game there’s the inherant tension of wondering how long you can wait to lay down a route before someone else swoops in and snatches it away. The tunnels also provide a brutal form of risk-taking. The rush to claim routes often makes you try for a tunnel before you are able to absorb the extra cost, but the extra turn to get more cards is one more turn where someone else can pre-empt you. The result is a finer balance between a fair shake for everyone, and increased tension and tactics between players. Because of this, I think the game handles larger groups better than the original. The equal balance and abundance of small routes means that a five-player game is far more reliable. The flip-side is that two-player games aren’t as interesting, which is why I held on to the 2-3 player Switzerland map.

So what made me hold on to Europe after getting rid of the other versions? I find that for me it strikes the best balance between what I need from this series. I really don’t play games like Ticket to Ride anymore, so the slight increase in complexity is appreciated for my more gamer-ish tendencies. At the same time, it remains an intuitive straightforward game. You can play it with your grandparents without much difficulty, and that’s good. If it were much MORE complex, it’d be virtually useless for me. I generally only play Ticket to Ride with casual crowds, so Europe strikes just the right spot between being complex enough to engage me, while still being simple enough to enjoy with non-gamers.

And besides that, I have a lot of fond memories associated with the game. It’s part of my history in the hobby, and I don’t think I could ever totally cut it out of my gaming diet. At the same time, I just don’t love the series like I once did. That’s not a reflection on the game, but rather on my own shifting tastes. It’s a little like the old D&D player who keeps his 2nd Edition books around. To get rid of them would be to forget where you came from, and Ticket to Ride has been too good to me to completely move on. And if the game is still occasionally enjoyable after several years, that’s reason enough.