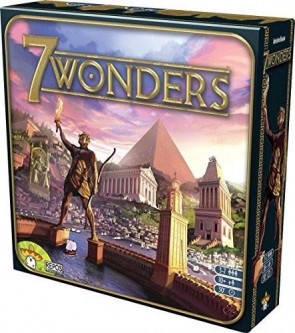 Game Name
7 Wonders
Publisher
Asmodee Editions
There Will Be Games

You know those infomercials you see on basic cable at 2 in the morning? I’m not sure what it is about the wee hours of the night, but suddenly you realize that you’ve always wanted a machine that can dehydrate all your food. To drive the need home, they will have footage of someone doing things THE OLD WAY. These old-fashioned people are suffering for not realizing that there’s a better way to dry food than what they’ve always known. Yeah! That’s right! How did we survive before the Jerky-Matic 5000 anyway? After you wake up in a puddle of your own drool on the couch, and you take that first cup of coffee, you realize something: at no point in your life have you ever needed to dehydrate food. In fact, until you heard of the Jerky-Matic, you never once considered that the need existed. The company first had to establish that this was a vacuum in your life, and then they had to sell you something that filled that void.

That’s pretty much what 7 Wonders does. It fills a need that it had to create. It’s a card-drafting game that can be played with up the seven players, and it reliably clocks in at around 30 minutes. Every positive thing I read and hear about this game boils down to this simple fact: there aren’t many 30-minute games that can hold seven people easily. And that’s true. But the fact is, that’s not a niche that I need to fill.

In three rounds, players are each dealt a hand of cards. You take one card from the hand you are dealt and pass the rest one way or the other. You then play the card you have, and select another card. The cards that you play form a tableau over the course of the game, apparently about a civilization. You gather resources, make advancements in science, create a military to hassle your neighbors, all the normal civ game trappings. If 7 Wonders has any strength, it’s that it’s a ridiculously simple concept. It functions a little like a sealed draft in a CCG, a  mechanic that was already utilized (to much better effect) in Fairy Tale.

The frustrating thing is that there are elements of a good game there. The drafting mechanic at least makes it feel like you are doing something like building a civilization. It’s abstracted to a huge level, but I’m fine with that. If I can handle abstraction in Dominion, I can handle it here. And heaven knows that it’s nice to have a thoughtful game that plays quickly. The problems arise because 7 Wonders is complicated in all the wrong places. The decisions and thought involved in the game is almost nothing, but then it turns to needless obfuscation when explaining the most basic aspect of the game, the scoring.

I’m not going to venture to say that 7 Wonders has no meaningful decisions, though that is my inclination. But I will say that the decisions FEEL small, which is in a way a much bigger crime. The stakes never feel high, and that’s a crippling blow in a civ-building game. It’s entirely without drama or tension, and the decisions are, on their own, not interesting enough to prop up the rest of the game. It’s very common to be passed a hand of cards with which you can do nothing. Oh sure, you can burn one for some money. But that’s basically being forced to bunt, not a strategic choice. And it’s certainly not a decision that you were forced to make because of your own poor choices in previous rounds. It’s something you just deal with because factors beyond your control forced them on you. Why anyone could complain about randomness in games and be okay with this is beyond me. For my part, I LOVE randomness in games, but 7 Wonders has been drained of anything resembling excitement. It’s just making another tiny decision in a game of tiny decisions.

And when you get to the end, you suddenly are thrown into one of the more arcane scoring systems I have ever had to wrangle with. There are about 2 or 3 separate scoring systems at work, but the guilty party is that of the science buildings. These need to be added and multiplied and squared and SOCATOA’d and everything. It’s not like it can’t  be figured out, but it was clearly designed for balance instead of usefulness. I’m sure it’s very well-designed in the sense that it makes those types of buildings a good strategic choice, but it sacrifices a huge chunk of usability. It’s this scoring system that effectively puts the game out of the “casual” sphere, which was about the only sphere it was good for in the first place.

But maybe I’m wrong about the strategy. It’s a losing battle to discuss how empty a game can feel strategically, because there’s always someone who has studied the game and knows it better than you. I don’t know many of these people, since the game has effectively died out in our own group. But usually when people defend 7 Wonders, they say something like this: “At least it plays a lot of people quickly.”

That is technically true. But it’s even more true that 7 Wonders sucks for big groups.

First off, it has to be said that seven players is a stupid number of people to have to play one game. There are numerous options for six people, and even more for less than that.You’re usually just better off splitting into two groups if you have seven people. But wait, you may say! We don’t want anyone to feel left out! Well, you’re in luck. There’s already an entire genre of games that deals with large groups who don’t have a lot of time. They’re called “party games,” and they are designed to be played quickly and taught easily. 7 Wonders fails largely because, while it allows a lot of people to play, it has no idea why it actually wants that many people around the table.

Why do people not want to split up their big group in the first place? Because we want to have fun. There’s a special dynamic that comes with large groups. When you get a ton of people around the table, it’s like conversation begins to open up. People are more likely to cut up, to laugh, to just enjoy the social aspect of gaming. Of course the big trade-off is that it can be very tough to wrangle that many people to listen to a game explanation. Party games work well because they are very simple, and great for promoting the special social interaction that comes from large groups. But you will never see that around a game of 7 Wonders. It insists on only ever embracing secondary interaction, and the goofy scoring guarantees that the game will be a headache to explain. You only ever have ANYTHING to do with your immediate neighbors, in game terms. The other players are basically a way to remove cards from the deck. It’s a big group game for people who don’t want to have to talk to others.

Nothing about 7 Wonders serves any reasonable game function. Instead of a fun social experience, it offers a way to sit around a table of seven people and never have to speak to them. I can live with that in a game with fewer people, or a game that just felt more satisfying. But this? This is like gas station coffee. It’ll keep you awake, but you’re probably better off falling asleep at the wheel.