Banditos Review by Ken B. 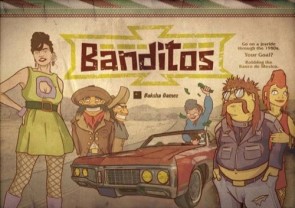 Remember folks, keep your friends close, and your pesos closer.

Spent some time with Banditos, where players try to rob a series of Mexican banks and make off with a ton of loot.  Each player is a different character, each with their own special abilities.  During your turn, you draw cards, looking for money, a weapon, and a vehicle.  Once you have these, it's time to drive across the border and pull off some heists!  As you rob banks, the heat level increases there, making each bank harder and harder to successfully rob.  If you get caught, it's off to the hoosegow where you'll lose your "hard-earned" cash and have to wait until you find an opportunity to escape.

Players continue doing this until someone hits the magic number of Nuevos Pesos.  The rulebook says 10 million but that's a typo...you play to 100,000 (unless you're looking for a 10-hour game of this.)

There's some fun to be had, but in a very old-fashioned, sometimes quite clumsy and creaky kind of way.  All the goods you need are piled into one large deck, including the money you need to buy said goodies, so you'll hit strings where there's nothing to do put pull cards from the top of the deck.

The heat mechanic is pretty cool though and gives the game some push-your-luck flair.  As you commit crimes, you and your vehicle will accumulate heat tokens.  As these pile up it gets more and more difficult to do anything without getting caught, so often you'll need to spend turns laying low to get rid of some of that unwanted attention.

It's very Grand Theft Auto-ish in that sense as you'll "steal" from the discard pile, buy a fast ride and the weapon you need, pull of a string of crimes, and then find a nice place to hide until your wanted meter winds down.

The rules aren't always crysal-clear on a few things, like the timing of placing heat markers (it's right before an illegal activity, so those new markers do count against you immediately.  At least, I think so, as otherwise it's way too easy.)  There are several holes in the rules like this that will leave you scratching your head.  The stop and start gameplay as players hope to hit the cards they need makes the pacing of the game seem off, and becomes worse as you hit rules snags as you go.

The cards themselves are of nice quality and you get a lot of them.  Some of the cards themselves definitely made me smile, such as the one with the flavor text "Ebony and Ivory comes on the radio and ironically starts a riot."  The game has a sense of humor and wears it on its sleeve.  It is by far the game's strongest suit.  You'll find plenty of humorous illustrations, famous quotes, and pop culture jokes aplenty.

I had fun with it, but mostly due to the theme and the funny bits in the game.  When you boil the gameplay down though it's about waiting until one player hits the spending money from the main deck, spends it, then other players take turns robbing the discard pile.  One or two players end up setting up small bank loops where they can easily stash their money every few turns.  Rinse, and repeat.  Players who fall behind start digging in the deck and taking more risks until they get busted and are essentially out of the game for good.

If you're a big fan of this type of theme you should give it a look, just don't expect a perfectly polished product.  It's messy and riddled with problems, but it's capable of giving you your bank robbing fix along with a few chuckles to boot.  I wish the rules could be cleaned up and the deck/money/loot situation improved, and the pacing of the game fixed.  It's most likely going to come down to if the humor and theme can carry it for you.

There are no user reviews for this listing.
Already have an account? Log in now or Create an account
Discuss this article
Log in to comment
Posts in discussion: Next of Ken, Volume 51: Cabin in the Woods, Banditos, and "Ken B. Looks Back!"