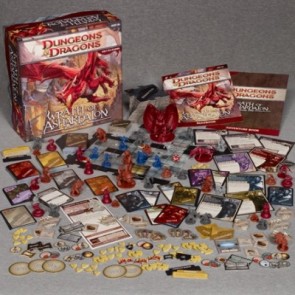 Game Name
Publisher
Wizards of the Coast
There Will Be Games

I never played Dungeons & Dragons growing up, but I see the appeal. There’s an allure to pretending to be a group of adventurers, delving deep under the ground to defeat the forces of evil. It resonates, and if I was the “MA in Literature” type, I could probably write a paper about the archetypes at work there. D&D was smart to tap into that. But geez, have you ever read a D&D sourcebook? For that matter, have you ever read any RPG book? They are insanely complex to the uninitiated, and even to some old pros. Barrier to entry is the biggest issue with RPGs, and Wizards of the Coast knows this. That’s why they created the D&D Adventure system. It’s a way to get that “into the dark places”  feeling without needing to commit to reading three hardcover books to play.

Of course, there’s already a whole genre of games that deal with this in one realm or another. Those are dungeon crawls, and they were very popular in the 1980s and early 1990s. You have a map of an underground realm, and the players travel through the tunnels and fight monsters, trying to accomplish some goal. The most famous modern example is probably Descent: Journeys in the Dark, by Fantasy Flight Games. That’s a pretty good three-hour game trapped in a six-hour game. Since the roots of dungeon crawlers comes from a very complex place, it’s easy for the games to be cluttered and bogged down. Descent epitomizes every one of those problems, to the point where even FFG realized it needed a face-lift. The D&D Adventure Systems are not only an attempt to strip down the dungeon-delving experience from D&D, but also from other popular dungeon crawlers.

There are three games in the series: Castle Ravenloft, Wrath of Ashardalon, and The Legend of Drizzt. I’ve played all three, though I only own Wrath of Ashardalon. The details differ, but they all play pretty much the same way. Each player is an adventurer exploring the dungeon, facing monsters and finding treasure. The games are cooperative, so the players all win or lose as a team. The dungeon is built using square tiles which are drawn randomly as the board is revealed. The monsters are then placed on the tiles and activated depending on who’s turn it is. The best thing about the D&D Adventure system is that the action on the board is very direct. Rather than messing with line of sight and range, you simply look to see if the target is within a couple of tiles of your guy. If he is, then depending on the attack you use, you can attack it. If you’ve ever spent several minutes in other games deciding between two squares to land on, this simplicity is refreshing. I’m also a big fan of the system of tiles and villains. There’s a sense of the unknown there, and that’s pretty exciting. No doubt being a cooperative system has a lot to do with this. Since there isn’t one player “in-the-know,” it fosters a real sense of camaraderie that similar games lack.

Combat is resolved almost totally by a single roll of a d20. Here is where things get very difficult. You roll this die a lot. It’s used to resolve countless situations, from combat to status effects, and in many cases a failed roll can be the difference between close success and crushing failure. And there really isn’t much way to modify the roll. You can get weapons that add to your roll, but even in the best of situations your odds of success rarely get above 50/50. Those are pretty stark odds for a roll that might end up determining the game. I don’t mind luck in games at all, but this might be a little sharp for some people. It’s not so much difficult as it is capricious. Those who are used to the manageable luck of games like Pandemic will probably find this to be too random for their tastes. Taken with the right attitude however, I don’t think it’s an issue.

The problem is, I’m not totally sure the game knows what attitude you should play in. While the action on the board is appealing and simple, there are other aspects of the game that are impossibly cluttered. The biggest culprit is the piles of cards that each player keeps in front of them. Statuses, character abilities, weapons, treasures, and enemies all pile up in a hurry. And this isn’t information you can just forget about either. You will need to be familiar with those cards to have a shot at defeating some enemies. The result is that the game almost drowns in stacks of cards. They tend to be a little heavy on text, and because of the lack of illustrations on the cards themselves it can be easy to confuse them. The only game that is comparable in this aspect is Arkham Horror, a much heavier title.

The problem is, the D&D games want to have it both ways. There is a vein of “seriousness” in the cards and statuses. Why would there be so much stuff to manage if the player was not meant to strategize and plan every move? But such planning is moot when a single die roll is just as likely to sink your game as anything else. And if that die roll won’t kill you, a later one probably will. The game wants to be straightforward and short, but the clutter that plagues other dungeon crawls cannot be avoided. It’s not helped much by a loosey-goosey ruleset that almost seems bored with rules explanation. It’s great to get you going, but don’t expect any help when a question pops up. If you play with thinkers, this 90-minute game can easily balloon over two hours.

That said, I like these games. If you keep things fast and casual, all three games are an good choice. The stacks of cards everywhere can be glossed over if you don’t mind forgetting stuff now and then. The squishy rules can usually be table-ruled without any problem. Indeed, the biggest strength of the system is how flexible it is. It’s clear that the players are meant to bend it to their needs, and in that regard the game is a success.  And because there are three different sets, you can start combining stuff just as easily as you can keep one box. You can even play solo, although I’ve never liked the solitaire game very much. Unfortunately, a lot of people don’t play games that way. I know that I can’t usually be bothered to tinker with a game, and a lot of other people will probably just move on instead of fine-tuning.

And so I find myself somewhat torn on the D&D Adventure games. On one hand, I admire the  simplicity of the action on the board, and the accessibility of the dungeon-crawling experience. But I wish they had been able to carry that design philosophy through to the nuts and bolts of the game. As it is, I think it’s in an unfortunate place where it’ll be too casual for heavy gamers, and a little too much trouble for casual gamers. That’s not a horrible place to be. After all, that’s why they invented the term “middle-weight.” I’m certain that WotC intends to use these games a lead-in to the full D&D experience. But it does mean that the game doesn’t really bring it’s own fun. You need to make it work for your group, either by tweaking rules or agreeing to just not take it seriously. I wish the game could do a little more heavy lifting in that regard, but what’s in the box is still pretty good.