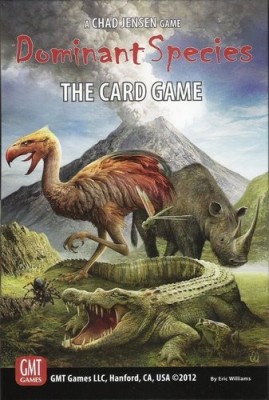 If a game is successful enough, it will probably catch a bad case of DKS (Das Kartenspiel). That means the there will be some card game version of the game, usually simpler and in a smaller box. It’s happened with lots of big Eurogame hits. The Settlers of Catan, Carcassonne, Ticket to Ride, and Puerto Rico all came down with DKS to varying degrees of success. My big problem here is not so much the cash-in. If I had a problem with that, I would also have a problem with piles of expansion, and I don’t really. My real issue with releasing a card-game version of a game is that the attempt to draw on a more successful game’s status is always a devil’s bargain. While it might prop up mediocre games (as it did with Ticket to Ride: The Card Game), it’s more likely to make the new game look like a watered-down version of its big brother. The perception that you are playing the weaker version can make a game feel like it’s more slight than it really is. It may seem silly, but when we have piles of games fighting for our attention, why would we not play Game X to play Game X Jr.?

That perception is particularly weird with Dominant Species: The Card Game. First of all, the original Dominant Species is a monster. It’s long and complex, more on par with the legendary Die Macher than it is with Puerto Rico. How does one begin to distill that down to a deck of cards? Not only that, but while Dominant Species was successful, I never knew it was successful enough that it’s brand would sell a much lighter game. But then maybe it isn’t a cash-grab at all. Maybe designer Chad Jensen was fiddling around with some other ideas from the original game’s design process, and thought that it might yield a neat card game. If that’s what he was shooting for, he was mostly successful.

Dominant Species: The Card Game goes for ten rounds. Each round is a battle for control of a certain “biome,” and there are six different animal species that will be wrestling for dominance. Those animals are all in a deck of cards, and they have a number next to them that represents how high they are on the food chain. You can control the biome in one of two ways. First of all, your animals can have the highest total food chain value. The biome will also favor what are called “elements.” Most animal cards have several elements on there. So if you have the highest number of elements that are present in this biome, you also get points for that. You’ll play one card per turn, adding to your stack of animals to control the biome and the elements. Some of the cards can “suppress” another player’s animal, which will make the animal endangered, lowering its food chain value. You can also play little event cards on each other to manipulate the situation on the board. A round continues until either everyone passes or someone runs out of cards. At that point, you draw a couple more cards and start up the new round.

The centerpiece of every round is that one-at-a-time play of cards, to see who can accumulate the most powerful animals. This is a pretty tense mechanic, because there are no prize for coming in second place in a turn. If you don’t have the cards to potentially win a round either in terms of food chain or elements, then you are better off just passing and sitting the round out. But then there are always those turns where you think your hand can take you far, and you didn’t know that the other guy’s hand was just a little better. After the round, you’ll only draw two cards, so if you spend six cards and lose anyway you’ll probably be in the hole for a couple rounds. For that matter, winning a round will also put you out of commission for the immediate future while you accumulate cards back in your hand. Each round is worth more and more points, so if you sit out and come back in later you still stand a good chance of coming back in. In essence, it’s a colossal game of chicken. At first I thought this might be a little too harsh for the loser, but it’s in keeping with the theme of that struggle for survival. There’s a nice go-big-or-go-home feeling.

Those who have played the original Dominant Species will recognize a lot of the terminology and the graphics, but that’ll be all they recognize. The card game is almost totally different. That’s a good thing, because to try to replicate the original board game would have been laughable. What has survived the translation is the theme of natural selection, where every turn is a fight and it’s kill or be killed. Like its predecessor, this is a cutthroat game. There are a lot of ways to destroy the other players, and a lot of those event cards are strong. Some people will complain about how powerful some of the cards are, but it’ll get more manageable with player experience. In fact, the directness of this version allows that struggle to come through stronger, without the mechanical baggage that comes from the original. There aren’t layers of rules to unpack or walls of text to sift through, and so you can concentrate on the battle of natural selection. It’s not as deep as the board version, but that would have been a pointless attempt anyway. I’d say it’s a reasonable trade-off as is.

The game plays from 2-6 players, and though I haven’t been able to try it with the full range I suspect it’ll work better with big groups. There’s a little more fuzziness as to who is winning at what point in the round, so there’s less reason to sit there and ponder what card to play. I also think (but can’t confirm) that the presence of more players allows the game to sit in a weird sort of balance. There are more people trying to throw the game in their direction, and I have a feeling this will pull back someone who looks like they’re running away.

It’s almost too bad that it’s just called Dominant Species: The Card Game. That simply says that the game is like Dominant Species, but with cards, which is a good way to make it look like a throwaway. It’s a shame too, because it’s a good game. I like how it manages to tap into the theme of the original while still remaining distinct. And I really like how interactive it is. It deserves to stand apart from Dominant Species, even as it was inspired by it.