Can You Imagine? - Dixit Review 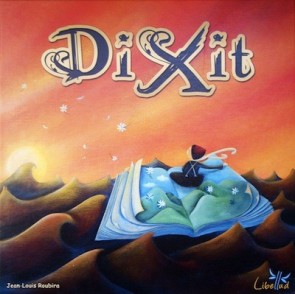 I don’t much care for party games. It’s not like I hate them. They give me something to do with big groups, and they’re really good for people who probably wouldn’t be interested in learning Mage Knight. If it weren’t for party games, I would probably play about 75% fewer games with my family, which would be a shame. But I’ll almost never suggest one, and it’s entirely likely that I’ll try to find something else to play.

I’m not sure where I get this antipathy. I think the biggest part is that if we’re going to laugh and goof around, I’d just as soon remove the game entirely. If we’re going to play a game, let’s play a game, right? But Dixit manages to stand above the rest of the crowd. Instead of goofy hijinks, it actually makes you think a little, and it makes you dig deep to come up with something that will connect with the people around you. That’s a pretty rare quality in any game, let alone a party game.

Actually, “party game” is not very descriptive when it comes to Dixit. It doesn’t produce peals of laughter (though it might). You only really play it with between 4-6 people, which is on the low side for party games. And it isn’t automatically the noisiest game at game night. Each player gets a hand of cards, each with an illustration of some whimsical or fantastic scene. Players take it in turns to be the “storyteller.” That person selects a card from their hand, and gives a vague description of the card. You can’t be direct here: it won’t work to say “it’s a snowglobe filled with gold coins!” Rather, you will ideally give some description of emotions or an abstract association you have with the illustration. Each other player submits a card that they feel matches your subscription. When those cards are mixed up, each other player then chooses which card they think was submitted by the storyteller. Points are then awarded to the storyteller if they get some people to guess, but if no one or everyone guesses correctly the storyteller gets no points at all. You also get points for fooling other people into voting for your card. You play until  the deck of cards runs out.

It’s trickier than you think to find that magic level of obliqueness to your clue. It depends a lot on the group you’re with, and on the shared experiences around the table. I find myself getting reflective when I dig down to come up with something. It’s not a deep level of introspection, but it’s just demanding enough to give one pause. The cool part here is that it doesn’t make the game bog down or seem too serious. Dixit always moves along at a brisk pace, and it’s proven to be largely group-proof. By that, I mean that it changes drastically based on the players, but it’s not fragile. A table full of quiet people and one loud guy will probably do pretty well with it, and they’ll be totally different then the crew at the family reunion. That’s a rare quality in party games, which require a certain amount of buy-in from the players to really take off.

The illustrations certainly do their share of the lifting in that regard. I can honestly say that I have never played a game where the artwork was so integral to the game experience. There is an astonishing variety of illustrations in the deck. Some are funny, some are a whimsical, some are moody, and some are just a little nightmarish. What’s really remarkable is that they are all surreal enough that there are often several reasonable choices to match the storyteller’s description. It’s not just the storyteller who is connecting with something personal to play the game. Each player does it every turn, and the variety of cards each round that somehow fit the description is remarkable. The cards somehow manage to be evocative without every tying themselves to any one interpretation.

The result is a game that is intuitive and fun, but almost totally unique. It’s one of the best games for those who want to introduce the hobby to others, because it’s lack of pretense and simplicity removes the usual imposing nature of hobby games. The game actually won the coveted Spiel des Jahres in 2010, the German award for best family game. Some of the online response was the text equivalent of monocles falling out, but I think it’s actually one of their best selections in years. And as usual for winners of that award, Dixit has been expanded mercilessly. There’s an alternate deck of cards that can be added into the original game, and sequel games called Dixit: Odyssey and Dixit: Journey. I’ve only played the original game, and while I might grab the expansion cards at some point, they aren’t even a little necessary. You can play fine on a single purchase.

The way I’m talking this game up, you’d think that I’m a dedicated fan. The truth is, I find the game more interesting as an occasional experiment. It’s neat to see how it affects people, and it’s such a unique experience that it manages to overcome a lot of it’s own shortcomings. But it is a very light game, appropriate for a wide variety of ages at the table. That limits its appeal for me, but will dramatically increase it for some groups. The very things that keep me from suggesting the game are those that will endear it to others. Its gentleness and lack of structure are a credit, but it’s just a little too mild for me to get really enthusiastic.

But I like Dixit. I like that it tries to be a party game that isn’t just braying laughter. It tries to connect with something inside of us, and it forces you to find a way to connect that little bit of you with others. That’s awfully rare in any game, and Dixit does it without the players even noticing. Just because it’s a party game doesn’t mean it can’t push you a little.