No Dice Rolling on this River: Egizia Shifting Sands Board Game Review

The Shining Creates An Impression - Review

Aww, You Noped My Battle Pope: A Pope Or Nope Board Game Review

Is Wonder Woman: Challenge of the Amazons the Best Comic Book Game?

One Small Step for Stellar Kind: A Stellar Leap Board Game Review

The Oncoming Storm: A Chrono Corsairs Board Game Review

Doctor Who - Time of the Daleks 5th and 10th Doctor Expansion 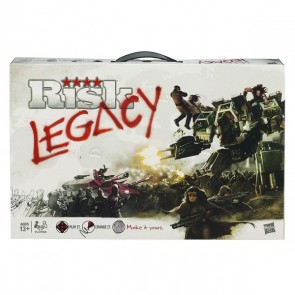 My new plan of playing the games I actually enjoy even though I have a huge stack of review copies sitting in the corner of the room and calling in silent, hissing voices, 'play us!' is working out pretty well. Today, instead of playing one of the dozen games I've got lurking in the corners of my office like monstrous toddlers with sharpened teeth, I played two games of Risk Legacy. I may not have reduced the pile any, but DAMN! did I have a good time.

The first time I reviewed Risk Legacy was about a year ago, before it came out. I played 13 games on that particular copy, which was obviously unlucky because my house caught fire before I could make it to 14, and destroyed that copy of the game. That level of luck is infectious, apparently, because when Risk Legacy's numerical curse destroyed the copy I had, it took every other game with it. It also cost me fifteen thousand dollars to fix the house. That was one unlucky board game.

So being a rationally superstitious man, when I got a replacement copy of Risk Legacy for my birthday a month ago, I resolved that I absolutely had to play it more than 13 times. Sure, I could have decided to stop playing after 12 games, but come on. It's Risk Legacy. It's one of my favorite games. I would much rather break the curse by going to 14. I'll risk it.

The thing that struck me as I played games two and three on my new copy was how incredibly awesome this game really is. I already know what's in all the envelopes, so it's not as though I'm looking forward to the surprises Hasbro has seen fit to bestow upon me. But what amazes me is how this new board is completely different, and the games I play on it will be new and fun and unlike anything we've played before. The surprises that matter are not the ones Hasbro dreamed up. The surprises are the ones you'll create yourself because you really need to protect North Africa, so you put in a bunker, or the world capital winding up in Canada and being named Sphincter.

Risk Legacy is the most unique game you'll ever play. Sure, it's a do-over of a 50-year-old classic, but there is no other game that mutates and changes so thoroughly as you play, until your Risk Legacy game will be unlike every other Risk Legacy game, and the more you play it, the more you make it your own. No other game has you writing in permanent marker on the board, tearing up the cards as you play, or putting stickers into the rulebook. Well, OK, other games have tried, but it was always a lame gimmick, and not anything that actually worked. Risk Legacy, on the other hand, works.

The furor over Risk Legacy has died down, thanks largely to the fact that gamers can only focus on any particular game for 45 minutes, or until Matlock is over. I still remember all the people who have revolted against the concept of permanently altering their game, people who have called Hasbro a money grab or tried to coat their board in dry-erase plastic so they could wipe out their changes. I remember all these people who totally missed the point and I want to get a little angry at their short-sighted idiocy, but when I do start to feel my blood pressure rising, I remember that I am having so much more fun than they are. It's like revenge for them being stupid - you feel free to act like retarded nerdlings, because in the end, I have something almost magical, and all you have is an obsessive-compulsive disorder and conspiracy theories that you can expound on the Internet to other like-minded anal-retentive assholes.

It's amazing to me that I have not grown the least bit tired of Risk Legacy. I love the game as much today as I did the first time I played it. This is the only time I'll play a game five times in a weekend and still say, 'anyone up for one more?' It's also the only game where, if I said that, everyone would agree.

Most people who play Risk Legacy will never need more than one copy. They may not even play through it 15 times. If they do, they can continue to enjoy their uniquely branded copy of this amazing game for as long as they like having fun. But for my part, having seen how much fun it is to build this world twice, I plan on owning several copies before I die. I'm going to have the one where Alaska's biggest city is Palinoia, and Brazil is a smoking ruin, and then I'll have the one where the world capitol is Testica, and then I'll have the one where the Enclave of the Bear guys can't spread out too fast because they get insecure if they get too far away from each other. I'll play one copy until the world gets a name, then play it some more, then I'll go get another one and start a new planet. Then when we decide to play Risk Legacy, we'll go grab them all and decide which one looks like the most fun.

If you haven't played Risk Legacy yet, what the hell is wrong with you? If you ask me, it's a flat-out travesty that it didn't sweep every award for 2011, and I simply cannot imagine why every gamer on the planet isn't playing it right now. Well, not right this minute. It's late. Your mom is wondering why you haven't walked the dog yet. So go let Spot mark an X, then get back inside and do something important - play Risk Legacy again.