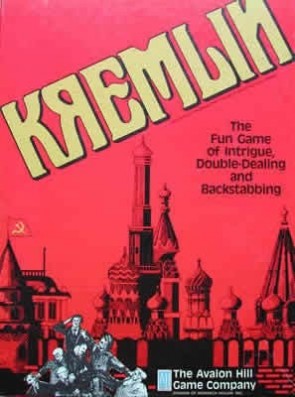 Game Name
Kremlin
Publisher
Avalon Hill
There Will Be Games

I’ve always had a somewhat romanticized view of the Soviet Union. It’s not that I particularly agree with communism or that I’ve ever spent time in the country. I think it’s more that it’s like the bizarro version of the United States. It’s fascinating to think that, for as afraid as the US was during the Cold War, that our “enemies” had their own fears and struggles about us. Because of that 40-year struggle, the Russian culture has always felt like the other side of the coin to me, a counterpart that we’ve never been able to figure out.

It therefore makes sense that I would be drawn to Kremlin. The conniving world that was Soviet power struggles is an obvious setting for a game. And Kremlin feels exactly like it should. It’s cut-throat, bizarre, and memorable as any game I’ve ever played. It’s also convoluted, arbitrary, and a little drawn-out. But I can overlook those qualities, because what’s there is so dramatic and tense and purely fun. Kremlin ranks among the most unforgettable game experiences I have ever enjoyed.

You are the leader of a faction within the communist party. You have a certain amount of influence that you distribute among 10 different party members. These members may be high-ranking officials like the Minister of Defense. They may be rank and file citizens, waiting to be nominated for public office. One of your party members gets 10 points, one gets 9, and on down until you have 10 party members ranked between 1-10 in how much influence they posess. The game itself involves taking actions with different members depending on where they rank in the party. Those actions might be choosing new party candidates, putting someone on trial, or even purging someone from the party and sending them to Siberia. The object is to finangle your guys into the position of party chief, where they will wave at the annual parade. If you wave three times, your faction wins.

The catch is, the party members’ actions are dictated by the person who has the most influence over that party member. That’s a secret, so you choose to reveal enough influence to show you have control. That’s all well and good, but what if someone decides to not share that they have influence over a certain member until it’s convenient to do so? You will frequently try to take an action, only to be interrupted by another player adding influence to that party member, which means you no longer control them. Not only that, but actions expend political capital, essentially “aging” a member. They become more susceptible to sickness and old age, and they might just find themselves in a memorial along the Kremlin wall.

Most of Kremlin involves trying to make plans while knowing maybe 10% of what you need to. That’s tough in a simple game, but the actual system of when actions can take place when is actually pretty complicated. Each turn has at least 10 phases, some of which happen one way and others that happen a completely different way. This is probably the biggest stumbling block to enjoying the game. You can’t really explain Kremlin, you just need to jump in and stagger blindly until you understand them. It’s appropriate that the game should be so convoluted, because that’s just how real politics can be. But if Kremlin has any faults, it’s that it ends up feeling old-fashioned and clunky, even as it sweeps you away.

And sweep it does. Kremlin hits an unthinkable balancing act between being just sneaky enough to let you in, and being unpredictable enough to throw off those irritating know-it-alls who can ruin games like this. There’s a lot of bluffing and second-guessing, which is right in my wheelhouse. Really fun groups might pull off some great negotiations, but I for one have trouble negotiating when I don’t even know what bargaining chips I have.

But it doesn’t matter, because Kremlin has my very favorite quality in a game: wildness. That’s my word for unpredictability that extends beyond mere randomness. It’s a kind of variety that doesn’t require piles of components to shake up the game. No, Kremlin is in the grand tradition of Cosmic Encounter and Dune. The way the game plays out is drastically different every time, to the extent that the game itself will have a totally different feel. It’s the sort of game that never needs an expansion, because so much is wrapped up in what the players do and how the game just shakes out. The downside is that you might end up with a dog of a game now and then. But the upside? Only some of the most memorable times around a table that I’ve ever seen.

To enjoy Kremlin, you’ll need to adjust your expectations. You don’t really plan here. You make little decisions based on what you think it’ll show to others or what you want to accomplish, but it’s hard to plan when the entire situation could change in one turn. There are also more than a couple ways to be totally screwed at the beginning of the game. You might be short one influence on one guy that you really needed. Your guys may never make it out of the ranks of the people, or they might be sent to Siberia on the whim of someone else. There’s so much to consider that I suspect winning the game usually happens by accident. Trust me when I say that it doesn’t matter a bit. It’s just fun to exist in the world of Kremlin.

Because Kremlin accomplishes a lot. It’s one of those rare games that is actually funny. The names are all bad puns that sound like they come from Rocky & Bullwinkle. To plan around anything is futility, and you can only flip the table in anger or laugh till you hurt when your plan unravels. No other response makes sense. There’s always something happening, always something to pay attention to. And it builds around your actions, not what the game says you did. The KGB Head actually sends someone to Siberia. The party chief dies of old age. The mechanics are complicated, but they bring such a richness to the game. It’s a sublime game that transcends mere negotiation and sneakery. It pulls you into the USSR, or at least the political cartoon version of it.

Originally published by Fata Morgana in the early 1980s the picked up by Avalon Hill, Kremlin has been out of print in the US for 25 years. As such, it fetches a pretty penny on eBay. But fear not, for the revolution is about to start again. Jolly Roger Games has announced that they intend to reprint Kremlin through Kickstarter, in a campaign expected to start by the end of October 2012. I have never kickstarted any game in my life, but I’m willing to make an exception here. They plan on not only reprinting the classic game, but also on adding new modules that will clean up the rules and hopefully modernize the game a little.

The cleanup is necessary, but I’m glad the old version will still be there. Because Kremlin feels like a fossil, a relic from the absurdity of the Cold War and from a bygone era of game design. But sometime age adds value. Kremlin is like a crazy old hermit who lives in a cabin. He may be insane and messy, but his stories are too good to miss.