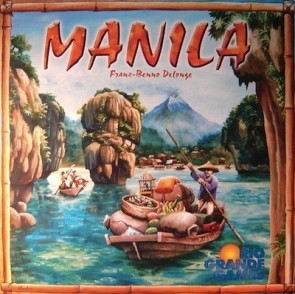 I’ve been reviewing games for nearly five years, and I’ve never played anything quite like Manila. I don’t mean that my experience hasn’t led me to anything similar, I mean I don’t even know anyone ELSE who has played anything similar. Usually something so unique would be a tough sell. After all, “unique” is usually a fancy word for “weird.” But Manila never feels weird, only natural and fun. The wildest part of all is that Manila isn’t even available anymore. I’m not sure how this gross injustice happened. Far worse games have been consistent favorites, while this gem withered on store shelves and now fetches nearly $100 on the secondary market.

Manila is mostly a gambling game, with some investment and just a touch of worker-placement, before that mechanic was even a thing. There are four goods, each of which has a small stack of shares. Like other investment games, you want the most valuable stocks at the end. The difference is that a stock’s value is driven up by racing boats. (Just like real life!) In each round, three of the goods race on little boats, and those that finish the race will bump up their value. The job of the players is to use their little dudes to place a wide variety of bets on the outcome of the races. You can bet that a certain number of ships will make it into port, that a certain number WON’T make it in to port, whether an individual boat will make it in, and so forth. Each possible bet has a pre-printed price and payout right on the board. Between each placement round, the dice are rolled to  see how far each boat will go, then you get another round of betting. When one good gets valuable enough, that will trigger the end of the game. Stocks are cashed out, highest total wins.

The gambling mechanic is half of what makes Manila tick. There are plenty of games that have gambling, usually some form of horse-racing. But Manila has a roll of the dice after each round of betting, so the picture becomes clearer every time. That part reminds me a lot of Texas Hold ‘Em, where each new card gives more information for the players, usually when such decisions are less lucrative. It works here because betting is usually cautious before the first couple rolls. Once the picture is clearer, people become bolder in their bets, so there will usually be at least a couple people at the table with reason to cheer or groan when the final roll hits the table.

The other vital half of Manila is the role of harbor-master. The harbor-master essentially controls the turn. They pick which boats will run, their starting position, and they get to place the first bet. Most importantly, they are the only one allowed to buy another share. It’s a ridiculous amount of power to invest in one player, and the game hands out this privilege based on an auction. For  the opportunity to essentially run the game, no price is too high. As we’ve gotten more experienced at the game, the auctions for harbor-master get more and more pricey. Sometimes it’s worth spending so much that you can’t do anything else that round, just to determine what boats will run. I’ve spent the last four years going back and forth on whether I think the harbor-master is overpowered. Now that we’ve seen the auctions get so pricey, I see that it puts a valuable pinch on money, especially on the winner of the auction. Without such a huge money sink, it’s possible that the bets would never feel important at all. In a way, it’s the biggest bet of all because you are investing a huge amount of money on something that may result in losing even more money. The downside of this whole thing is that when a player doesn’t understand how important it is, they can let someone have it for a song, which can create a bit of a gap between players. It’s a small bit of fragility that proves to be a minor weakness.

Since the auction siphons off so much money from the game, and since the only way to compete in the auction is to win some bets, each turn feels very high-stakes. Some of the long-shot bets are actually priced a little cheaper, so if you’re low on cash they encourage you to bet on the long odds. It works hard to make sure that everyone can stay in the game, and it’s rare that someone has to pass on placing a guy. Even better, it is a game filled with rags-to-riches swings. You can win piles of money one round, and lose your shirt the next. It’s possible to come back from huge deficits to win the game. The final roll of every round is always tense, and it’s always followed by an explosion of shouts as the results are seen. People blow on the dice and find little superstitions as the game goes on.  I wouldn’t be surprised if some people have played with real money, though I wouldn’t recommend it.

Manila was published by the German publisher Zoch, known for their cute and elaborate productions. Manila isn’t a very component-heavy game, but what’s there is frankly awesome. The boats are all wooden canoes that give the game a great visual flare. It also comes with a pile of plastic coins in five different denominations. They are hard to tell apart and there aren’t nearly enough, but they give a nice rattling click in your hand. The result is a table spread that, while not huge, stands out among cube-fests and plastic armies. It’s just another aspect of Manila that feels and looks like nothing else.

Maybe the biggest fault that Manila had was that it just worked too well to draw attention to it’s excellence. The originality and excitement weren’t ostentatious. They faded into the background amid shouts and high fives. But in a hobby where games are consumed like Big Macs, we don’t always have time to let an unassuming title bloom in front of us. Too late, a lot of gamers are realizing that board games are poorer without Manila. Unappreciated in its own time, at least we now know how good it is. It says a lot that even though I could probably sell my copy for a c-note, I don’t think I ever will.