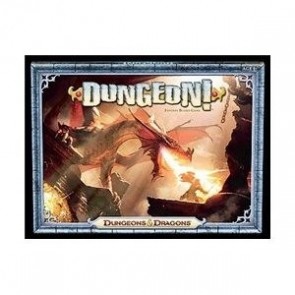 Hey, new Dungeon!  Why not. I love this stupid game, and I always will. Find out why at No High Scores.

It’s a great, cheap version of the game. THIRTEEN BUCKS online. It’s also a great test to find out if someone is a fun-first game player or somebody that wants to huff and puff about elegant mechanics and whatnot. Put out a copy of Dungeon! and see who gets excited and wants to play. Those are the folks you want to play with. Send everybody else over to the Rurhshifffahrt table.

Mighty Stephen Buonocore at Stronghold Games sent his regards by way of review copies of Crude and Article 27, and both look like winners. Crude is, of course, the new version of McMulti. Most people have not played McMulti, which is soon to be rectified. This is a great economic game very much in line with games like Acquire or Shark, but with a more detailed and more volatile economy. It’s pretty clearly a Settlers ancestor, too. The new production is great- looks very businesslike, and they must have gotten the original molds for the big, chunky pieces. Very excited.

Article 27 is designed by my pal Dan Baden, who once got attacked by a drunken Steve Avery. It’s a pure negotiation game, which I like, and it comes with a gavel. Which I love.

I contacted the Mage Wars folks again, they were supposed to send a review copy back in August. Hopefully they’ll come through, I really want to see it.

My Halo 4 review went live at 3:01 a.m., as soon as the embargo lifted. In short, it’s fucking amazing. It’s the best Halo yet, and it is the high water mark for console game presentation. It looks _staggeringly_ good. The gameplay is great as ever, and the multiplayer is an endless time-sink that should be fun to dig into. Too bad about the story, which is as lame as ever. Cortana is such an awful character.

I haven’t really been playing much on IOS lately since that’s comics time now, but I did get Punch Quest since it’s free and I like Rocketcat’s games. It’s really fun, sort of a endless runner but you get to titularly punch stuff. Fun and challenging. It’s freemium, but I don’t really know why you’d buy anything in it. You just don’t need to.

River’s REALLY into Toca Tailor, which I think Matt reviewed as his little Web site that he betrayed us all to write for. I’m sure he’ll be happy to post a shilling link below.

The top read this week was Punk Rock Jesus, a new Vertigo six-issue run by Sean Murphy. Despite the silly title that suggests something Garth Ennis or Mark Millar might do, it’s actually a very smart satire with some absolutely dynamite black and white artwork that definitely looks influenced by Otomo. It’s about a reality show in the near future that clones Jesus…and as things are revealed, Jesus doesn’t quite turn out the way they expected. He gets mad and rebels. He finds his bodyguard’s collection of punk rock records and gets his hair done up in liberty spikes. He runs off and joins the “last punk rock band”.

It could have come across as really trite, juvenile, and silly. But it doesn’t, it’s very heartfelt, honest, and it’s definitely about how important youth rebellion is. The characters are outstanding across the board- his mom was selected a la American Idol to be the perfect virgin mother…but she begins to fall apart as the show goes on. The bodyguard is an ex-IRA terrorist that may or may not actually believe that the kid is really Jesus, and he may or may not be trying to atone for an awful lot of wrongdoing.

There’s some really neat stuff going on in the writing, it’s very elliptical and the actual “J2” show is never actually seen. Events are referenced, and the story moves on from there. Like, five seasons of the show pass between pages but it completely works. It’s one of the best-written and best-drawn books I’ve read in a while. And it feels like classic Vertigo.

Speaking of which, that’s most of what I read this week. Old Hellblazer (not sure why the Delano stuff gets short shrift, it’s really good), Lucifer, Unwritten, and a couple of stories from American Vampire, including “Ghost War” which was awesome. How do you set a vampire story in the South Pacific theater in World War II? Find out.

I also read the first 12 or so issues of Punisher Max. I dunno, I kind of thought it was garbage. It’s Garth Ennis alright. Not sure how entertained I was by having a woman offhanded talking about how she likes big dicks and then later seeing her shot to pieces and bleeding out saying “I am so wet right now”. Typical Garth Ennis vulgarity for vulgarity’s sake. Not shocked by it, depressed. Then there’s wonderful scenes like innocent bystanders at a bombing with their arms blown off and a shard of glass stuck through the back of their head coming out their mouth, still alive and crying. Man, that is exactly what Eisner and Kirby were working toward right there.

As Andy said last week, Kitchen Irish was horrible. That’s Ennis’s attempt to tell some cheese-dick Boondock Saints Irish mob story that no one but him cares about. He just stuck the Punisher in there as a side show.

I get that Punisher SHOULD be remorselessly violent. I’m all for it. But When I’m seeing kids shot through the mouth and their brains on their dad’s hands, it doesn’t serve any higher purpose other than titillating the bros and gorehounds that get off on this kind of stuff. I’m all for violence in context, I like a lot of gory stuff, but something about it in the comics really, really puts me off.

Tried Locke and Key again…terrible. I think if it were drawn by someone who didn’t learn to draw comics by one of those “how to draw Manga” books, I may like it better.

Scott Snyder’s Severed was kind of a nice little horror book though…definitely a slow-burn creep-out, worth taking a look at.

Just plowing through classic horror. Island of Lost Souls, the Universal stuff, miscellaneous Hammers, Witchfinder General, Castle of Blood…and of course my annual viewing of The Haunting, which I’ve often declared the best horror movie ever made.

But you know, I’m getting close to the point where I almost think Night of the Demon is up there with it. It’s Jacques Tournuer’s non-Val Lewton horror film, and it’s so freaking good. It’s subtle, creepy, and very definitely not ambiguous even though it plays that game. There really is a big, ugly demon in it. Spells really work. But it’s all handled exquisitely, and the Crowley-like sorcerer at the root of the film’s villainy is just an amazing horror character. If you’ve ever said “hey, I wish there were movies that handled magic like how Hellblazer does”…this is it.

But the most horrible thing I saw all week was The Lorax. I rented it for River out of Red Box. It is the most soulless, plastic, demeaning, insulting kid’s film I think I’ve ever seen outside of junk like Ice Age and Madagascar. That it has Dr. Seuss’s name on it, let alone that it’s a film based EXTREMELY loosely on one of his best, is a travesty. It’s loud, obnoxious, phony, and hypocritical. This is all before the disco dancing and white rapping. Hey, remember in the book where there was white rapping? Me neither.  Utter trash that should be cast out and destroyed.

Moved on to Porcupine in my Echo and the Bunnymen retrospective. It’s hard to not call Ocean Rain their best, but Porcupine more than holds its own. It’s funny, because usually I don’t care about format and I think that rhapsodizing about listening to music on one format or another is silly since the content is the same, but I do actually miss listening to these records on vinyl. There was something special about having these records with these amazing band photos on them, the track list split in the middle, and all of that.