I Bid You Welcome - Fury of Dracula Review 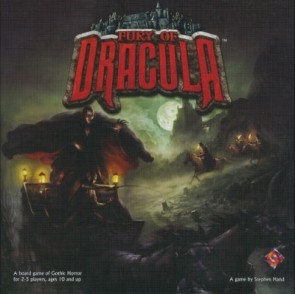 At this point in popular culture, it’s hard to swing a stick without running into something about vampires. And as is always true when something reaches cultural saturation, it descends into parody. The ubiquity of the Twilight franchise has rendered vampires just a little less overdone than zombies. It’s easy to forget that vampire literature has a much richer history, one that is steeped in atmosphere and darkness. One has only to see Murnau’s Nosferatu or Tod Browning’s classic Dracula with Bela Lugosi to see the possibilities for the genre. They eschew cheap scares for moodiness and quiet dread.

Since board games have not yet been able to pull off cheap scares, horror board games must therefore go for mood and setting to pull off anything like horror. A couple of games have done well with this, like the numerous games based on HP Lovecraft’s work, or even simple party games like Werewolf. But the genre has never been better than it is is Fantasy Flight’s re-implementation of Stephen Hand’s classic game Fury of Dracula. Instead of wall-to-wall action, it pushes a subtle tension that slowly builds over 3 hours or so. By the time the game has finished, players are almost always at the edge of their seats.

Set after Stoker’s original novel, it is discovered that the devilish Count Dracula is returning to power. They must pursue him across Europe as he sneaks from city to city, creating new vampires and leaving a trail for them to follow. The four investigators are played by 1 to 4 players, and Dracula is played by another. He moves secretly around the map, dropping hazards and clues around the board. The other players can travel by road,  by rail, or by sea, but they need to be careful about catching Dracula. If they run into him at night time, his power is much greater. Since Dracula gets closer to winning if he defeats a hunter, it’s advantageous for him to attack them in the right circumstances. So there is a push and a pull at work here. For the hunters, they need to find and kill Dracula, but they must time their final push to catch him at his weakest. Dracula must learn when and where to attack to be successful.

Games with a heavy narrative like this one tend to be exciting and action-packed. Stripped to its bare essentials, Fury of Dracula is instead an enormous game of hide-and-seek. That means that long stretches are spent on false leads, near misses, and quiet suspicions. But every now and then, you get a moment of pure adrenaline, often when the hunters sense they are closing in on the Count or when Dracula suddenly appears to attack someone. Those moments and the promise of more like them keep this game tense. I’ve heard complaints that it can feel a little long or slow. I understand why people feel that way, but I just don’t see it. There is always far more happening than meets the eye.

This is especially cool, because it does this for both sides. The hunters have their own tension as the locate Dracula, and Dracula has his own internal musings and silence to stew with. As a rule, one-against-everyone games like this are something of a drag. The guy teaching the game often must play the “one,” and that’s largely true here. But for once, that is a good thing. I love playing as Dracula, and playing as a hunter is an equally satisfying experience. The chase and deduction elements blend really well with a low-key adventure feel, where you gather items and take control of a character. It’s lucky without feeling too lucky, and thoughtful without being a brain-burner.

Part of the reason they can pull this off is because the game is actually not a very busy one. Though it does add complexity to the 1987 original (still unplayed by me), this is easily one of the most straightforward games Fantasy Flight has ever released. When held against behemoths like Arkham Horror, its clean design feels refreshing. Don’t misread me, this is not a game you can really bust out with just anyone. It still has a lot of rules and still takes three to four hours to play. But those rules never feel ostentatious. Almost all of the mechanics feel like they are in their proper place and have been thought out. There are one or two gamey aspects (why does time stand still when Dracula is at sea?), but that’s sometimes how board games need to work.

The game is still complex enough to have a learning curve. I don’t mean the rules, which mostly fall into place before your first game is done. I mean the strategy on both sides is not immediately evident, and the obvious strategies are less effective than you think they are. Dracula will feel inclined to do a lot of hiding, but it’s very difficult to spend the whole game in the shadows. Since combat will happen, it’s best to make sure it happens on his terms, so learning when to attack is vital to success as the count. The hunters need to learn where they are most vulnerable, and how to utilize the special powers of the different characters. As you gather more games under your belt, you may see the balance of victories see-saw back and forth. Like Merchants & Marauders and Battlestar Galactica, the two sides feel like they are balanced when everyone is experienced. I’m a big fan of this quality in a game, because it doesn’t just give everything up the first time around. The narrative and theme hook you, but the strategy keeps you coming back.

A game like this requires a lot of mood to work, and the production does more than its share. Out of all of Fantasy Flight’s gorgeous productions, this one stands out as my favorite. The illustrations are shadowy and expressive. The map is great to look at, and a model of usability with the look of a nice parchment map. I’ve felt that recent FFG productions have become overwrought and busy in their graphic design, but Fury of Dracula shows how good they can be. And compared to their other big-box games, it might have the fewest components of any of them, only a few tokens and about 3-4 decks of cards.

But it’s a little misleading to pick apart the game like this. The truth is it all blends together so well. I would put it as one of the great games of the Ameritrash genre, but that also seems a little weak. Best to simply say that this is a unique, engaging game. I have played many times, and it still doesn’t feel like enough. It’s one of the best games I own, and probably one of the best stories you can get out of a box of cardboard and plastic.