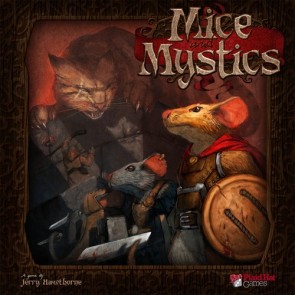 This began as a reply in "What Board Games Are You Buying"  to my previous post about whether Mice and Mystics was worth getting as a game for adults.  I got mixed answers so I and just went ahead and bought the damn thing.

I then wrote that I was favourably impressed with the presentation but it was too early to really judge it after only one play.  However, my grown up kids were coming over on the weekend for my birthday and I said I'd have a better idea after playing it with them. I was basically writing a follow up  session report in the forum and it turned into this. So I thought I'd post it where everyone can see it as I know I'm not the only one who wondering about this game.

Sooooo....weekend's over.  Here's the story:

The kids showed up with a bottle of Espresso Patron!!!   We played from nine  to three in the morning.   It took us awhile because there was as much chatter and drinking as there was game playing. We didn't drink the enitre bottle but we  put a good dent in it. I read them the intro and off we went.  Now the intro could have been a little shorter.  It's hard to sustain an audience for a new game with a long read.  However, I kept them interested by telling them they should pay attention to the characters beause they were going to be choosing which of them they wanted to play. That helped them focus on the story a little better.

At first they were cynical and a little mocking, but as the game wore on the story and the game play and the sheer cuteness of the mice won them over and  they got into it. My daughter's mouse kept hoarding cheese, at one point refusing to put any cheese on the wheel because there was a cheese shortage in the land and her character Maginos, the Mystic NEEDED his cheese. And he really did because cheese fuels this little mouse-wizard's spell casting. What's more thematic than Mice with a fondness need for cheese?!  So we put hearts on the wheel.

With everyone getting used to the rules and gameplay, we lost the first game but buckled down in the second and won handily several pages short of "The End."  The party got the Miz Maggie achievement token and Nez got the Cheesemaster token so we managed to advance "The End" two spaces back giving us more time.  There's a LOT of dice rolling because the game is a basic hack and slash. What's more Ameritrash than that?! You MUST clear every minion off the tile before you can advance.  The fighting puts cheese on the wheel whiich acts as a timer AND delivers more foes.  The game is won or lost by how efficiently you manage the new enemies and the wheel.

Filch for instance takes a cheese off the wheel with a successful hit on a Rat.  When the cheese wheel is full, a surge occurs which advances the Page Marker toward "The End" and launches new enemies whose difficulty is based on how far forward the Page marker has moved.  If you're having a bad game, this mechanic compounds it. The chapter page is also advanced whenever a mouse is captured (runs out of life).  One or two of these at the wrong time can also end the game.

We liked all the dice rolling.  It maintains the fun.  However, there's a lot of it and some may find it tedious after awhile.

VERDICT: Game play is simple enough for kids, but there's enough strategy for adults in positioning, the abilities you pick up and how efficiently you use and share the stuff you find.  Like any good co-op if you play sloppily and take too long finishing off the enemy you WILL lose. So the game has enough in that department to keep you honest.  If you're playing the rules properly mice can get swarmed if they find themselves alone. Mice adventuring together can share stuff and are stronger.

The combination of simple mechanics and story make this a winner as a FAMILY game whether or not you have kids.  That means you can play it with non gamer adults as long as they are somewhat imaginative. BUT this game could bomb big time for the serious analytical types.

However, WE had a memorably fun night playing it.

Is it an adult game or a kid's game?  It's both.  I think it's complicated enough that most kids would need an adult to play it WITH them at the younger age (7) stated on the box. So it's not strictly a kid's game in that sense.  The story isn't all that cheesy (pun intended!).  It's a simple fairy tale and I can see if you're reading it with a group of adults, you might feel a little self conscious or even embarrassed causing you to ham it up for effect which actually doesn't work well.  It's written well enough that if you accept it as the fairy tale it is and read it straight up with a little feeling, it works.

For me the story elevates Mice and Mystics above Castle Ravenloft (which I traded many moons ago).  Both are fairly predictable dungeon crawls, but when you play Mice and Mystics you feel  like you're on a grand adventure .  The artwork is wonderfully evocative and the minis are adorable. There's no other game quite like it so I think it definitely earns a spot in any gamer's collection.  At least it does in mine.