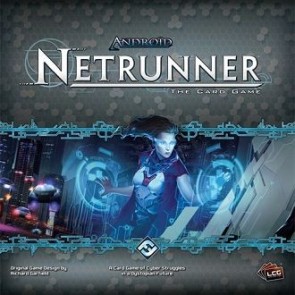 This is why, when Fantasy Flight Games released Android: Netrunner, I had absolutely no idea that it was in fact a Living Card Game version of one of those limp, feeble Magic: the Gathering wannabees. But now I have purged all traces of that overwhelming monstrosity from my mind, body and game collection, and am shriven and ready to look again at the Collectible Card Game format with fresh eyes. And good job too. Because it turns out Andriod: Netrunner is neither limp, nor feeble, but really rather good.

One player is a dystopian, morally ambiguous corporation hoarding secret agendas for profit while the other takes the role of a dystopian, morally ambiguous hacker attempting to steal said secret agendas for profit. You’d be hard pressed to get any of this from watching people play the game. Artwork is bland and generic and the mandatory fictional quotes on each card are largely meaningless. So how, then does the game go about communicating its theme to the players?

Well, in a slice of minor genius, it does so entirely through the mechanics. All the cards the corporation has are computers that can be hacked by the opposing player. You’d expect this of the agenda cards that are the target of the game and the “asset” cards that the corporation uses to generate money. But it’s not just these, it’s everything. The corporation’s hand, deck and discard pile can be hacked, examined and sometimes forced to trash cards. It’s a simple conceit but it works wonders in creating a sense of realism during play, the cold blue card backs of the corporation glittering at the players like banks of server lights.

To stop the hacker from doing terrible things to all his cards the corporation has two weapons. The first is ICE cards which sit in front of the cards contained on a computer and anyone trying to hack in either has to have appropriate hardware and software to bypass or disable it, or be willing to suffer its unpleasant effects.

The second is good, old-fashioned bluffing. Almost everything the corporation plays starts life face-down so the hacker has no idea what it is. He doesn’t know if he’s hacking a valuable agenda, a worthless asset or a dangerous trap, nor if the ICE protecting it is cheap rubbish he can brush aside or lethal software that will fry his brain. Once he attempts to break through into the server he’ll find out, but by then it may be too late.

But activating defences costs the corporation valuable money. Similarly acquiring tools to break down the barriers costs the hacker money. And so the entire game becomes a tantalizing ballet of resource management and poker faces, probing and reaction, fear and paranoia. The corporation faces a circular struggle of installing assets to make money, which then need money spending on them to create defences. The hacker has to split his precious time between getting money to buy hardware and software, and testing the defences to find out what they are, what they’re protecting and whether the corporation actually has the resources to activate them. It’s beautiful to watch, head-crushingly tense to play.

There’s also an arms race going on, a spiralling evolution of one-upmanship. The hacker can only deploy a limited amount of software at any one time, and all of it is limited to bypassing certain threats, being ineffective against others. So as the hacker uncovers bits of defences, he’ll need to constantly fine-tune the tools at his disposal. The corporation will be trying to stay ahead of him, varying the amount and types of ICE to try and ensure there are always barriers that can’t be broken. It’s a useless struggle: in another thematic nod, just like real life, hackers will start probing for weakness in defences as soon as they’re uncovered and will eventually prevail. But the corporation just needs to stay ahead for long enough to get his agendas played and scored and the constant struggle of capabilities toward this goal is underpins much of the games thrills.

There’s a huge asymmetry between the two roles in the game. Each draws from a completely different set of cards, and has a different turn structure and set of actions to perform during their turn. The hacker is cast in the role of aggressor, scouting enemy security and attempting to defeat it while the job of the corporate player is more defensive. Some people may find that job dull in comparison. It’s a little like the role of the games master in an RPG: very reactive, but you have the deliciously smug pleasure of knowing all the secrets while your foe deliberates in a stormy sea of uncertainty. I think there’s plenty to make playing both sides thoroughly enjoyable.

The asymmetry has worked its way into rulebook terminology in a most irritating fashion with a ton of needless jargon to ingest before you can play. Players don’t have hands of cards: the corporation has an “HQ” and the hacker has a “grip”. Cards are not turned face-up but “rezzed”. The rules introduce a wealth of similarly inane terminologies and then use them throughout instead of sensible, clear terms. I presume the intent was to immerse players further into the Netrunner world, but the play alone does a fine job of that, and all the jargon just serves to make this moderately complex game far harder to learn than it should be.

Once you’ve got past the language barrier, you’ll need to use the cards in the box to build decks for the two players to use. A deck is built around a faction, a unique identity which gives the player a special power and limits the number of cards from other factions that can be included. Starter decks are suggested, but they’re not great. The corporation decks contain insufficient ICE, and both sides suffer from the limited pool of powerful cards.

You can overcome this by buying another box, but both these issues give a clear message: Netrunner is not a game well suited for casual play. After more than a few hands you’ll want to start constructing decks, and then you may well want a second copy. Down the road there are expansions hovering into view. Time and money is required to get the most out of the game.

That’s my one gripe, but it’s a big one since it undermines a key advantage the LCG format has over the CCG one. Beyond that, I can find little reason to fault Android: Netrunner. The way it brings its theme alive through the play alone is magical. Better, it makes a virtue out of forcing two seemingly incompatible bedfellows, carefully planned strategy and bluffing, to lie together under the same duvet. It’s a lot like Poker, but with more time planning tactics and less time calculating probabilities. Ultimately it may end up costing you a similar amount. But if you’re ready for a brand new time sink in your life, they don’t come much better than this.