In My Opinion... - Say Anything Review 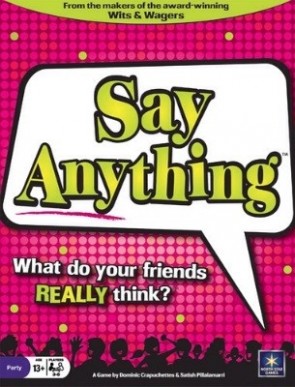 There’s a period in every gamer’s life where we harbor dreams that our friends and family will convert to hobby games. We show them some game (Ticket to Ride! Settlers of Catan!) that we hope will cause an epiphany that sends them scrambling for the nearest game store. And then the holidays come around, and our attempts fail. We learn that most people don’t even regard board gaming as a hobby possibility. As a friend of mine once said, it’s a little like telling someone your hobby is fruit. Most people never consider it an option.

But they want you to play SOMETHING with them, since you’re the guy who plays games with everyone. So into that gap steps party games. I think that’s why a lot of gamers don’t care for party games very much. They represent an admission that not everyone will want to drop everything and play Dominion. That’s why it’s a big deal when a group of gamers are willing to pass up a big strategy game to gather and laugh around a more party-oriented title. That’s where I find myself with Say Anything. It’s not like we move heaven and earth to play it, but when the situation demands a party game, it’s everything I want out of the genre.

Up to eight players take turns drawing cards from a deck of cards with several questions. The player selects one of the questions to ask the other players. Each question starts with “In my opinion…” and then asks each of the other players to answer the way they think the reading player would. All of those answers are written down on little dry-erase boards and gathered in the middle. The reading player then secretly selects which of the answers they think is best. Once they do that, the rest of the players try to guess which answer he picked. Astute party gamers will notice that Say Anything borrows a lot of different pieces from a lot of different games. There’s a little Apples to Apples, a little Balderdash, and a goodly portion of Wits & Wagers, a game by the same designers. The impressive thing is that this synthesis never feels cheap or warmed-over.

Say Anything is great at knowing what’s fun about party games and what needs to be avoided. The biggest case for playing party games is the wonderful chance to get to know each other over some loose structure. It may be with silliness or trivia, but they’re meant to get people to relax and just have fun. Say Anything puts you in the shoes of the other players in a very small way, and then makes you guess how that player views themselves. It’s true that we’re talking about silly things, like a person’s favorite 80?s pop song, but you’d be surprised how much insight that can offer into someone’s personality. The real fun happens when someone picks a surprising answer and everyone discusses why or why not it’s the best one.

It’s at that point that the game really reveals it’s strength. It does a great job of promoting conversation and discussion without ever bogging down or getting intimidating. A lot of group games take people out of their comfort zones and expect them to love it. Say Anything doesn’t require much of the players aside from preferences. It doesn’t even stick you with a question you don’t want to answer. Each card has several possible questions, and the player picks which one they want. It gives choice without pressure. People aren’t put on the spot, they just need to be ready to make a choice and enjoy the discussion that will ensue.

That low-pressure feeling is really what keeps the game coming out. It doesn’t require a specific kind of group to enjoy. (Although it’s best if everyone knows each other.) I can drag it to just about any old party and assume it’ll work. There are tons of laughs to be had, and they all arise organically. Call it “grass-roots” humor, unlike the enforced goofiness of something like Apples to Apples, where the game says something that’s supposed to be funny. Not that it isn’t, but it’s still the game providing the parameters. Here you can literally say anything. This can result in some “adult” humor, but obviously that depends on the group, and anyway those situations are usually the most memorable.

I don’t have many complaints at all. North Star Games has done a great job of bridging the divide between hobbyists and normal people with their titles, and I think in that regard Say Anything is a high watermark. The only strange thing is that in any given round a player can’t score more than three points. At first I thought this seemed rather arbitrary, simply a way to keep the game close. And in practice, I suppose that’s true. But upon reflection I think it’s a good move. First of all, it’s not like this is a game to play in a tournament setting, so who cares? But it also shows a good understanding of their own design. If the limit wasn’t there, I’m sure the scores would be way more random and silly. As it is, most players have a shot until the end, which means that people will actually try to win. Just another quality missing from many other party games, which can often be unraveled by one ham who doesn’t have a shot at winning and doesn’t care if he derails the whole experience. (Caution: may be autobiographical.)

As board games keep losing out to things like taking care of kids and other commitments, it’s nice to have party games around, and it’s even nicer to have one that works so effortlessly. It’s one of the only games I’ve introduced to my family that persuaded my mom to go out and buy a copy, and it’s one of the only games my dad will even play. The last time I played with my in-laws, we even agreed to extend the game another round, and I was happy to take part. That’s enjoyment that no other party game has ever been able to achieve, and it shows what a special game Say Anything actually is.