Dice Temple: Talisman Review - You Got The Dice Kid? 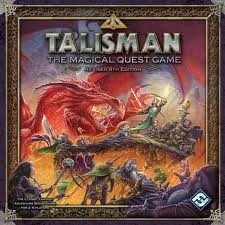 Before sitting down for your first quest in Talisman, before even reading this review, there is one important question I bade you ask yourself: Are you man, or are you hero? Are you a sniveling maggot, a despicable excuse for an adventurer, fit for nothing more than eternal shame and crushing defeat? Or are you a titan, born to be revered and feared, able to pass through dragon-infested lands, face demons from the farthest reaches of hell, crawl to the very ends of the earth, to the top of the highest spire, to the Crown of Command, and smite those who have stood in your way to victory? This question is important, for if your fate lies within the the lands of Talisman, you must realize that the only true path to glory is that of a force at which all tremble.

In Talisman, a classic beacon of ameritrash, you will find yourself a character, either elf, knight, troll, ghoul, wizard or any other fantasy archetype to be had in this wonderful game. During gameplay, you will roll dice for movement, pray you get the three you need to drink from the Fountain of Wisdom and gain stats, and then be disappointed when you roll a four and land on either a fearsome dragon, or a hardly helpful boar. You will then continue to travel across the land, encountering various monsters (which you will attempt to slay), strangers (which you will interact with to gain items, spells, and stats), events (which usually disable multiple players for turns at at time), and items or followers (which act identically to items only they don’t take up one of your four item slots because they can presumably carry their own weight).

After a couple hours of this, as well as battling your opponents, and cursing when your friend gets their third magical object (all you have picked up all game is a poltergeist), players will begin to make their way to the Crown of Command. For you see, the object of the game is to reach the Crown and cast “command spells” until your opponents are dead (to cast said spell you roll a die, on a 4, 5, or 6, each opponent loses a life). But alas, reaching the Crown is not as easy as it seems. The Talisman board (besides being gorgeous, as Fantasy Flight issued the fourth and latest edition) is separated into three rings, and the Crown is in the center of it all (picture at the top of this review).

Players begin the game on the outer ring, and must make their way to the middle ring by crossing a river, which can be done in several ways, including fighting a sentinel who guards the only bridge, to obtaining an axe and building a raft in the forest. Once in this more treacherous territory, players continue to adventure, build their character’s stats, and gain useful objects, until they are strong enough to break down the door that separates the middle from the inner ring. Once inside the inner ring, one must only pass several trials (fighting packs of werewolves, being bled by vampires, entertaining your in-laws for the weekend) and then they are permitted to climb the steps to the Crown of Command and seal their triumph, provided they have acquired one specific item, a talisman, for which the game is named.

Things you will like about this game range from how awesome it is, to the classic fantasy setting, to the incredible stories that are created in this rather long game (2.5-3.5 hours). While there is a very good deal of chance built into gameplay with everything built on dice rolls and all (combat, movement, various spells and events), I find that even when I am continually pummeled by both my opponents and lady luck for hours on end, I still am satisfied at the end of every game (although strict eurogamers are just plain out of luck).

Now I know what you’re thinking, “This guy is a masochist…three hours of losing? That cannot be fun.” But your wrong for two reasons. The first is that, being so dependent on dice rolls and card draws, Talisman can turn around quick. I’ve seen people lose for half a game and skyrocket to victory. I’ve seen people on top of the world tumble so fast you’d think they…tumbled a lot or something. The possibility of these hairpin turns in power make taking chances exciting and many times worth doing. The second reason is that, as this game takes so much time and energy, it is a game that pays well when you do win, and leaves you fulfilled when you don’t. You may be disappointed in a loss, but it sure is damn funny when you realize your minstrel just spent two hours moving one space a turn because of a follower you picked up (true story). And when you win, and the burnt corpses of your enemies cinder at your feet, the euphoria is indescribable - but seriously its pretty great.