Dice Temple: Betrayal At The House On The Hill Review - blood...blood...BLOOD! 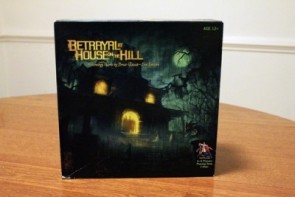 Betrayal at the House on the Hill is a game of mystery, violence, and the supernatural. You and your friends will delve deep into the bowels of a haunted house, exploring the unexplored, creeping over rotting floorboards, and dodging maddening apparitions, hoping you will live to tell of what you find. You will explore three floors in this condemned place, triggering events, finding items, and either suffering pain and insanity or gaining strength and knowledge. Then you will be betrayed by one of your own.

Betrayal is a semi-cooperative exploration game for 3-6 players that uses a tile-laying mechanic to slowly build three floors of haunted mansion as you discover them. The game lasts about an hour, and is divided into two distinct parts, the first being exploration, and the second being one of fifty endings, reffered to as betrayals, in each of which one party member attempts to murder his or her friends in cold, horror themed blood.

During the first phase, players will spend their time discovering tiles. Each tile is a room, and when flipped, prompts the player who discovered the room to draw one of three cards (there a few rooms that do not, but those are boring as they do nothing, and few in number). The three types of cards that can be triggered are these: an item, simple and self-explanatory, items are held by their finder and help in a variety of different ways; an event, which usually buries a dice roll, either detrimental or helpful depending on result, deep in horror flavor text; or an omen, which is usually a powerful item, but also requires its owner to roll six dice. If the number rolled is lower than the number of omens found that game, the betrayal is triggered.

Once the betrayal begins, the game transforms. Guided by one of two booklets, the “Traitor’s Tomb” or the “Secrets of Survival” manual, players will either work together as heroes to defeat their betrayer and whatever minions they now employ, or employ said minions and attempt to bleed former friends dry. These endings are certainly the most fun part of the game. Avoiding spoilers, a betrayal scenario might go something like this: Peering into the laboratory, you slowly make your way into the dark recesses of the room. You stumble. Something is there, calling you from the floor in the shadows. Upon touching the weapon, the spear, voices fill your head, beating drums seem to sound from all around, and an ancient figure appears. “You have been chosen” the figure states in guttural tones, you find you understand her ancient tongue. “You know what you must do.” Filled with the rage of a millennium, you do know what you must do. You must taste their blood.

Now as you can see, Betrayal at the House on the Hill is a great game for those who love theme. There is no shortage of horrific events and bumps in the night for those who wish to play by candlelight (certainly the best way to play this game). But there are a few polarizing aspects of this game that will turn some away. The  first is that you don’t play the game so much as it you experience it. It is much like Arkham Horror in this respect. Chance plays a huge roll in how this game progresses. So if you are a strict eurogamer, and like bountiful choices and deep strategy, this game is not for you.

Also, because chance is such a large part of the game, the betrayals tend to be weighted to favor one side or the other. And this is probably the largest flaw in the game’s design. If the betrayer has done well all game, has many items, and good stats (which I haven’t mentioned as they are very simply designed, but do influence physical conflict and dice rolls) then there is a good chance they will win. If, on the other hand, the betrayer has had their head shoved where the sun don’t shine by so many ghouls, collapsing floors, and Pentagram Chambers they can’t see straight, the heroes are in for an easy win.

These flaws are certainly notable, and may effect how much table time this game ultimately gets. But that being said, I still highly recommend this game to anyone who enjoys theme, and a tense roll of the dice. The sheer depth of flavor in Betrayal at the House on the Hill far outweighs its detriments. Because that’s what this board game is all about: story. At game’s end, you may for a moment sigh at the sheer beating you took, but then you realize you and your mates were slowly consumed by a sentient glob midst wailing terraces and solemn organ rooms. And that, for me, is great. Its a wonderfully fun game to play with non-gamers, family (excluding young children as there is some gore), and even a game group who needs a good laugh, and a good time. Because when you are all one with the slime, you realize nothing could be better.