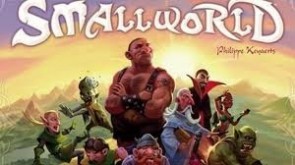 When the Burrowing Giants begin to descend from every cold mountain pass to flatten your Flying Orcs into green whoopie pies, it can be a depressing moment. But then again your playing Small World and you should have expected this to happen (more than twice per game), and you should have known not to get so attached to those cretins. Looking on the bright side, you place those worthless green confections in decline, and consider that your next set of troops will at least have plenty of nutritious, energy-dense snacks for on the go. Because that is what it takes to make it in this cruel, small world: ruthless detachment from those that serve you, and unending flexibility.

Small World is a game about warring over...wait for it...a small world. Including a different board scaled to every possible number of players, this game ensures that during your exploits within its light-hearted fantasy theme, you will be forced to endure unending battle with your opponents. But unlike many other war games (I use this term considering theme only, this game lacks the depth of strategy and minute detail loved by serious war gamers) players will be forced to leave behind their troops over and over again using a mechanic central to Small World called "declining." But I'm getting a little ahead of myself, so lets take a step back and give our readers a little necessary background.

In Small World, there are two components that make up the races players will be choosing from throughout the game: the race itself, and the special ability paired with it at the time of choosing (both races and special abilities are placed on manageably small pieces of cardboard that conveniently interlock as they are taken from their prospective shuffled stacks). Throughout gameplay, players will use these races to conquer spaces on the board, and will gain one victory point at the end of each turn for each space held at that time. These victory points are important because, of course, the winner is the player with the most at the end of the game. But also because they take form as coins which are used to obtain races, when needed, up to six spots into the current stack, by paying one victory coin (as I have now dubbed them) for each place down in the stack your chosen race lies.

"Why would I need to to do this?" you ask. Well the thing is, Small World is designed so that each race is obliterated in a few rounds, or at least is not worth keeping around. And that is when declining comes in. When you decline a race, each space on the board which they hold continues to be yours until someone comes and takes it, but you are left with only one immovable unit on each space, so don't expect to hold on to them too long. After declining your current race, you pick a new race as described earlier at the beginning of your next turn, and start smashing faces all over again. And as said, this mechanic really drives the game, creating cycles that make any one given race you use only crucial to a fraction of your strategy.

Now, pros and cons. Pros: This game is fast paced, takes less than two hours, has a wonderfully amusing fantasy theme, and is fun, as you get to smash faces. Cons:  I actually don't have a con to mention so much as a warning for those who are considering buying this game. On the surface it may seem to some to be heavy in strategy, like mini-risk with cartoon elves. And while short-term strategy is very important in Small World, the fact that races decline so often makes one unforeseeable factor a huge part of how gameplay unfolds, and that's what your opponents will choose to do. You don't know if they are going to pick the Fat Hypnotoads or the Whipped Interns, but you sure as hell know its going to effect you when they stomp those Dwarves you were going to keep around another round.

So, if you want a game that is light-hearted, has plenty of conflict, rushed decision, and great art, this game is for you, as its exciting, fast and fun. But if you thought you had found something that you could ponder over smoking turkish blend in the library, with your smoking jacket on and scotch at hand, well then my friend, go buy Archipelago.