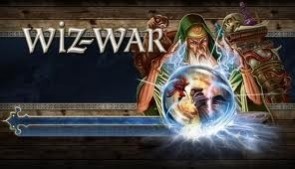 Yesterday I cracked open my new copy of Wiz-War for the first time. I have the eighth edition Fantasy Flight version of this classic game of lightning fast magic duels, and was not astonished to be immediately stunned by all of the eye candy. Great plastic miniatures, tons of tokens with colorful graphics, a beautiful board, its all there, per usual with Fantasy Flight reissues. But to my surprise, as soon as I had read the rules and got a game underway, I forgot all about the art.

I mean, I could play this game with pieces made from broken tongue depressors and rusted pennies from under the couch. Because in all its elegance Wiz-War boils down to one thing. Pure bloodthirsty competition. Which equates to pure bloodthirsty fun.

From your first turn in Wiz-War, you’ll be blowing holes in walls, shape-shifting,  throwing acid, creating floods, teleporting, and shooting lightning at everything and anything that moves. Set in an underground labyrinth, a fight to the death doesn’t get more claustrophobic than this, and that’s exactly how it should be. When you’re stringing together spells to the detriment of those being mutilated around you, experiencing one single moment of enlightenment, a symphony of destruction, you realize that this deathtrap of a game could be no larger nor more complex without abandoning some aspect of its beauty.

Whats more, its seems to me at least that Wiz-War is an obvious precursor to Magic: The Gathering, which is pretty cool, as I spent five years of my adolescence obsessed with the game. The spell system is entirely based in cards, which have many similar designations as are found in MTG, and the game allows spells to be linked and psynergize much in the same way MTG encourages.

So if your ready to add another new game to the game group rotation, consider Wiz-War. At 2-4 players, the game is great for those nights when only one other person shows. And no matter how many people your playing with, this fast-paced, cutthroat game will have you scarring your friends in no time.

Thanks for reading Dice Temple! More reviews at dicetemple.tumblr.com. Questions, comments, concerns, and potential review inquiries (much appreciated!) can be sent to maloney_andrew_t(at)yahoo.com.