In Ages Past - Clash of Cultures Review 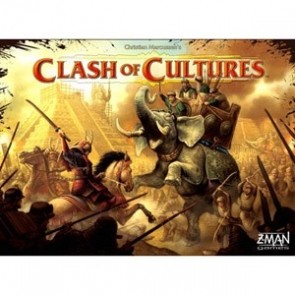 Does the world really need another Civ game? If you had asked me a year ago, I probably would have said no. Not only is it a crowded genre, it’s crowded with classics. There’s the old Francis Tresham game from Avalon Hill, still played by people with more time than I have. Vlaada Chvatil’s Through The Ages is one of the highest-rated games on Boardgame Geek. Kevin Wilson and Fantasy Flight cashed in on the popular computer game license a couple years ago with their own civ game. And I’ve personally always had enormous respect for Serge Laget’s Mare Nostrum. That doesn’t begin to touch on less epic games that incorporate aspects of civ games (like Settlers of Catan and Innovation) or that transport the genre to a more speculative setting (like Eclipse or Runewars). It is into this cramped space that Christian Marcussen felt compelled to launch his sophomore effort, Clash of Cultures.

Fans of this type of game will be able to guess the high points: explore territory, conquer neighbors, collect resources, research technology, etc. What matters is how it accomplishes these things. This game is played over six rounds, each consisting of three turns for each player. A turn consists of three actions that the player picks from a list of possibilities. Actions could be to spend resources to get an advance for your civilization, or to move units around the board and attack neighbors and barbarians. A lot of other actions are wrapped up in a single one, called a city activation. This is how you build more troops, expand your cities, or collect resources. If you activate the same city more than once in a turn, it can put them in a bad mood, so that’s something else to manage. You can improve the moods of your cities with a civic improvement action as well. As the game goes on, your civilization becomes more spread out, and you have the opportunity to build wonders and create whole empires. There are also smaller objective cards, one dealt to each player per round. These are good for a couple of VP as you accomplish them. At the end of six rounds, players score points based on what they’ve accomplished, and the high score wins.

For a civilization game, it’s pretty streamlined. Indeed, the biggest advantage that Clash of Cultures possesses is how it strips away the hassles that make civ games such a challenge to play. Marcussen has an uncanny knack for knowing exactly how far to push an element before it  becomes too much. He never overthinks the design. Consider the objective cards. It can be something of a swing to get a hand full of objectives that don’t work for you, but just dealing them randomly one at a time is a good move. It’s cleaner than putting several of them face-up (Twilight Imperium style) or some draft where you can choose them. Just deal them and be done with it, I say.

But the good thing here is that it doesn’t feel like all strategy has been sacrificed at the altar of simplicity. Instead, Clash of Cultures removes impediments to learning mechanics so that you can focus on learning strategy. Again, the objectives are a great example. They each contain two ways to claim the card, one more building-focused and the other based on military might. If one direction isn’t working for you, maybe the other one will. The advances are another good example. Tech trees in civ games tend to be loaded with prerequisites, requiring the player to jump through a few hoops to get what they want. There’s a small level of foundational stuff that must be built here, but the advances are much more straightforward to attain. They all have the same cost as well, which means it’s easier logistically to get them into play. It has just enough resistance to keep the game grounded, but not so much that it feels like work.

The advances deserve a little more mention, because I think it’s where the game shines the most. I really like the ability a player has to focus in a specific direction and tinker with their society in a certain way. Of special note are the government advances, which focus your civilization as a democracy, autocracy, or theocracy. I really like the specificity here, because each government type comes from a particular type of society, and then shapes the things that happen afterwards. There’s a wonderfully organic feeling to the advances, and it’s something that permeates the whole game. You aren’t given a special racial power at the beginning, but your society is dictated by what advances you choose, what your neighbors are doing, and your geographical location. It flows wonderfully, the perfect balance between player choice and outside circumstances.

But the best thing I can say about Clash of Cultures is that it hides its seams very well. In college I was taught that good stagecraft doesn’t draw attention to itself, and I feel like this is important in game design as well. Clash of Cultures feels polished and complete. Even if you don’t like the game (and you should), I have little doubt that whatever you don’t like was specficially intended to be there. This reminds me a little of Marcussen’s first published game, the tremendous Merchants & Marauders. Both games feel like a culmination of countless play sessions, with a keen sense of what works and what doesn’t. If anything, Clash of Cultures feels even more focused, lacking some of the mechanical clunkiness of Merchants & Maruaders.

Like that game, Clash of Cultures was produced by Z-Man games, who once again have produced a magnificent product. There are very few questions that cannot be answered by a quick glance at the player aid, and when you need to look something up it’s easy to find. There are tons of little touches that I love, like the little square wells to place cubes so that you can mark what advances you have. I also love how your cities get little buildings that phyiscally expand it on the board. And plastic, oh lawdy is there plastic. It’s not all of the highest quality (why don’t the sails actually stay in the boats?) but the sheer volume of it and visual appeal makes it worth the slight annoyance. This game cuts an impressive figure on the table, without drowning in chits and cards.

There are a couple of potential landmines here. I’ve read and heard some complaints about the random nature of the objectives, though it doesn’t bother me at all. The way I see it, not every civilization gets the same advantages in real life, why should it be different here? I’m not sure the game is really designed for long-term planning to begin with. I mean, you CAN plan but it feels like you’re better off just going with the flow and focusing in the final third of the game. That fits my personality pretty well, which may be why I don’t mind. A bigger problem might be the sheer amount of special powers and so forth. The rules are straightforward, but it does contain a lot of special actions wrapped up in cards and advances. That can be easy to lose track of, especially when you’re learning. And learning can also result in a longer game. Early games took a full hour per player. That’s still doable on a weeknight, but it’s pushing it.

But none of those are issues that would keep me for calling Clash of Cultures one of the best games of 2012. It says something that in the crowded world of civ games, this one manages to stand out. It makes me think that Christian Marcussen might have a better handle on Ameritrash games than any other active designer, so I trust his judgement. If he says that we needed to try his conception of a civilization game, I am certainly not one to argue. Clash of Cultures is his second terrific game, and it’s one of the best in its class.