Lords of Middle Earth : War of the Ring Extraveganza 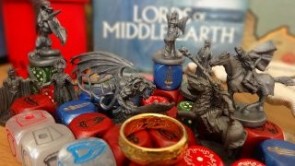 Game Name
War of the Ring: Lords of Middle Earth
Publisher
Ares Games
There Will Be Games

Licensed games based on well-known films or books are nothing new, and while of variable quality, generally rather better than their digital counterparts. But since its publication, the love for War of the Ring has been little short of astonishing.

It’s not hard to see why. The biggest achievement of the game is to allow players to re-tell a plausible version of The Lord of the Rings on each play through whilst still enabling plenty of strategy and freedom of choice while doing so. When you consider how difficult that balance is to maintain, and how venerated the source material is, the astonishing scale of that achievement becomes clear.

But the game is not without its detractors. It’s fiddly to set up and time-consuming to play. It was clear to even neophyte players that the original edition was tilted in favour of the Sauron player, an imbalance that actually got worse as players became more familiar with the tactics. There was also a degree of railroading, scripted strategies that could be followed to improve the chances of victory.

An expansion helped those issues but in a heavy-handed way. Handed the opportunity to re-release the game in a new edition, the design team sought lighter routes to the same goal. Aside from some minor rules tweaks, their answer lay in the characters and card deck. There were significant changes, making it harder for Sauron to bring powerful pieces into play and work the scripted strategies. The Free People in turn were given attractive alternatives to their common tactics, offering more choice, and some of their best cards were made easier to play.

For the most part it worked like a charm. But for first edition owners to benefit they needed to invest in an upgrade kit, a nicely produced tin holding copies of the new card deck and a pack of custom card sleeves. The new cards are lovely things, their larger size used to display quality art as well as improving the horribly cramped text of the originals. But the sleeves are a bit pointless and the price for this kit, even allowing for the design work that went into it, seemed excessive, being higher than many stand-alone card games.

Now there is a small expansion to the basic game available. Lords of Middle Earth focusses, as its name suggests, on characters from Tolkien’s world, adding minor but significant players like Elrond, Galadriel and The Balrog while introducing alternative versions of almost all the characters from the basic game which can be used to replace the originals if you so wish.

The new material can be divided into two groups. We’ll deal with the more minor change first, the Council of Elrond option which allows the Free People’s player to tinker with the makeup of the fellowship, sending altered versions of some companions back to their homelands as part of setup, even allowing Strider to lead the fellowship, at the cost of some free actions for the Shadow player.

I get the feeling this isn’t going to get used very often, simply because it adds to the overburdened setup time and will confuse everyone’s tried and tested strategies. Which is a shame, because it’s a flavourful addition that addresses one of my key irritations with the base game, namely the tendency for companions to be used as Nazgul-fodder, protecting the ring-bearer at all costs rather than leaving the fellowship for adventures elsewhere.

The bigger change is the addition of Shadow minions and Free People’s keepers of the elven rings. Each of these adds a weaker version of the action dice that provide the engine underpinning the base game, a player’s’ potential choices each round being determined by rolls of these dice. They also offer unique powers for the use of each ring rather than the generic re-roll of the base game.

For the free people’s player, the keepers and their dice represent a choice over whether or not to use the powerful elven rings to further their cause. In the novel, this was discussed but set aside as likely to attract the attention of the Dark Lord and therefore too risky. Mechanically this is represented in a delightfully simple manner: keeper dice can backfire, sometimes being removed from the game and others being added to Sauron’s “Hunt” tally, which is used to find the ringbearer.

The Shadow equivalents work similarly, except that while their dice can be removed from play, they never backfire. Gothmog adds a military-themed dice while the Balrog is more capricious, sometimes enabling extra actions, others the opportunity to leave Moria and go stamping round the countryside thereabouts. I was pleased to see that he goes on foot, being correctly classified as a non-flying minion.

What this brings to the game is a wealth of subtle and nuanced strategic choices for both sides without either adding much in the way of additional rules overhead or breaking the basic theme of the game.

Every possibility that’s enabled by the expansion is something that’s been kicked around in Tolkien fan circles for years. What if the Balrog was under Sauron’s command? Or one of the elf-lords had used their ring? Or Gollum had been tamed by Frodo’s kindness and not rebuked by Faramir? All these are delicately explored by the expansion, without invalidating older possibilities. Characters and situations leap off into life, the expansion fleshing out the bare-bones narrative of the base game with colour and detail.

It’s arguable that the exploration is almost too nuanced. The price for the rules-light way in which the new elements are introduced is that nothing, with the possible exception of the Balrog, feel substantially different to the base game. The new dice are still basically action dice. Making sensible choices as to when to use alternative characters rather than the originals requires a considerable appreciation of the strategic options in the game.

It’s also a gambler’s delight. Pretty much everything on offer outside the Council of Elrond option has a heavy random element. Dice can be very useful – or backfire badly. Smeagol can come into play if the right hunt tiles get drawn, and then might be useful depending on what cards come out. Whether this detracts from strategy is debatable, since each option needs to be chosen before being brought into play, and is therefore a calculated risk. But once picked the consequences can vary wildly on factors beyond the player’s control.

In many ways Lords of Middle Earth is the sort of expansion I’d want every game to have. It adds interesting new possibilities for experienced players without substantially altering the rules or the feel of the base game. But in being so delicately balanced it renders itself largely inessential for casual players. There are many hours of excitement and interest in the base game before you’re likely to become jaded by its possibilities, and familiar enough with its intricacies, to require this.

Where it scores though is with players who’ve done just that with the first edition game. The second edition isn’t different enough to warrant new attention from those people, but this expansion makes it so. Unfortunately to do that, they’re going to be pitching in for both the upgrade kit and the expansion, both of which look overpriced for the contents. War of the Ring is an exceptionally good and wonderfully creative game, but elements of its publishing are beginning to smell a little like a cash cow.