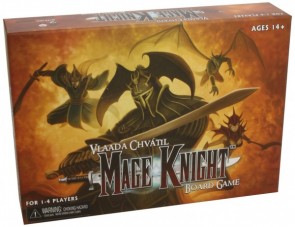 The cool scent of dusk hovers, the sun will soon retire to silent slumber. The forest grows dark, but you are not fooled — under shadow lies life, and with breathe comes probable danger. You will ascend to the tower in the distance this midnight. Silhouette firm but ever fading, you know not what lies within its walls…it does not matter, it is no match for you, it is no match for a Mage Knight.

One of the most rewarding moments for me as a fairly new board game enthusiast is infecting long time friends with the bug. Nothing quite beats making someone else understand why you love a hobby so much, and considering tabletop gaming requires friends to play with, its all the more satisfying when they too kneel to dice addiction.

Considering this I was quite pleased yesterday evening at my weekly game night in Storrs, CT, when, despite impending snow of apocalyptic proportions (said the weatherman), a core group came out to play a game new to our table which was purchased recently by a friend of mine, The Beard, on our trip to Philly: Mage Knight.

Now Mage Knight isn’t the kind of game you just whip out in shrink wrap and get moving in the matter of thirty to sixty minutes. In fact Mage Knight isn’t the kind of game you get moving in three hours. It took The Beard an hour just to sort all of the components, and myself about four hours to run through enough of the introductory scenario that I could teach the basic mechanics of the game and play this intro scenario with others (which doesn’t even include advanced mechanics such as player verse player combat, elite recruitable units, or interaction with cities).

That being said Mage Knight rewards the patient and the vigilant. Its a game that gives back for all the hard work you put into learning it. Because those first four introductory hours are all worth it when you realize you’re a dragon mage raiding dungeons, fighting orcs, and accruing priceless artifacts, while simultaneously trying to race your rivals to astounding fame and glory.

The detailed premise is this: you are a Mage Knight, a being of incredible power but bound to an entity known as The Council of the Void. You are eternally indebted to The Council as they bestowed on you great physical and magical ability, and so, each scenario is another mission the Mage Knights must accomplish.

But Mage Knights are lone wolves — independent and competitive it will be your job as one of them to balance cooperation and competition with your fellow peers as you all adventure for the bidding of The Council. In a land wrought with bands of warring orcs, mage towers, aggressive draconum, and other turmoil, stories of legend await to unfold, developing with your every move.

You will discover randomized tiles with varying terrain, earn advanced skills, spells, followers, and powerful artifacts with each level you gain, and each dwelling or beast your conquer. In this way Mage Knight is extremely reminiscent of the Avalon Hill classic Magic Realm. Available actions, atmosphere, and use of day/night, tokens, and hex terrain are all comparable. But luckily, unlike the cult classic (which I am still working to fully understand) Mage Knight is introduced with the aforementioned introductory scenario, which leads players step by step through each mechanic in basic gameplay.

This is probably the most impressive part about the game, second only to the genius of interplay between mechanics throughout game design (intertwined leveling, deck building, follower accruement, the list goes on). An immense amount of work was spent simply making this complex masterpiece accessible to anyone let alone light gamers (who should not play it). But I would say even someone accustomed to medium weight games, if they were willing to put in some time, could learn and enjoy this fantastic adventure game.

So if you have some extra time, if you enjoy high fantasy adventure, and if you have the imagination to be whisked to a land of treasures, dark shadows, and glinting blades, pick up a copy of this game. This game straight up blows every other game I’ve played of the same genre out of the water into orbit around some distant unforeseen star where all rejected games peer back into the darkness from whence they came, and remember in awe the crushing legend that is Mage Knight.

Thanks for reading Dice Temple. More reviews at dicetemple.tumblr.com. Questions, concerns, comments, and review inquiries can be sent to maloney_andrew_t(at)yahoo.com.