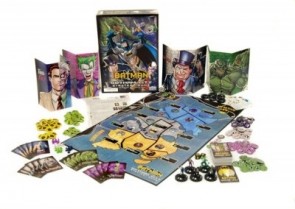 Behind the façade of the great Gotham City lies an active underworld of criminal activity. In Batman: Gotham City Strategy Game, you'll play as one of Gotham City's greatest villains – The Joker, The Penguin, Killer Croc, or Two-Face — and lead your gang of henchmen to try to become the King of Crime in Gotham City! But beware, as your hold on the city increases, so does the chance of your plans being foiled by Gotham's protector – Batman!

I've been playing Batman: Gotham City Strategy Game.  Despite Michael Barne's lukewarm endorsement, there's actually a fun game there.  Yes the artwork is a little lurid but it's also fun to see your opponent's over the top illustration on his game screen.  Behind it is his hideout where he holds his henchmen, information and loot.  The game consists of maximizing a hand of five cards from which you get to play only one.  The card has a top effect that pays off to the ruler of one of 12 blocks and a bottom effect you can either discard for two resources (information, money or threat) or use for its "criminal plot."

At various stages you level up by controlling city blocks  (threat) or by having a certain amount of information or certain amount of money. (Each level has different requirements)  Your Villain gets a thematic power every two level ups and they're kick ass abilities.

The game strategy consists of hanging on to good cards so you can maximize their criminal plot benefits beyond the two resources you get by default.  Whoever finds the synergy in their cards and manages that best, will apply the most pressure on the board. Since you're only using one card each turn, you really get to know the rest of your cards.

Villains are powerful.  They control a block just by moving there even if your opponent has more threat.  The players have an incentive to play Batman cards because in most cases, it hurts their opponents.  The card will often say what area (Uptown, Mid Town, Downtown)Batman moves to but you get to choose the specific block which means you get to place him on your enemies where he wreaks havoc. There are 10 cards in the Batman deck.  One of them can bring Batman to you.  Another one can also do that if you're the strongest Villain...three have universal effects that hurt everyone and the rest allow you to place Batman where he can do some damage to the other players.

So Batman is often in play which is cool.  The turns are short.  You only play one card on your turn.  You can then move all of your henchmen and your Villain (if you have information) on the board. It's very fucky.  You're continually screwing with your opponents.  The fight mechanic is quick and involves ONE roll of the Bat die by each side (modified by your henchmen (max five) and any special power your Villain has that affects combat.

Bottom line is artwork aside (and I found I really didn't mind it all that much because it's more than compensated for by playing a decent Batman game) there is real game in the box with several layers of strategy.

I think it's a good game.