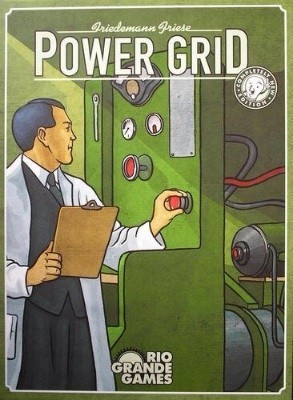 I don’t often talk about how much I like Power Grid. On F:AT, it’s usually regarded as one of “those” games, the kinds liked by boring accountant-types and fun-murderers. Besides being unfair both to Power Grid and to accountant types who aren’t so boring, it’s simply untrue. Indeed, another reason that I don’t usually let on much about my love of Power Grid is that EVERYONE I KNOW LOVES IT. I forget the last time I went to a large organized game night with at least one table of this Friedemann Friese favorite, no fooling. Perhaps in a feeble attempt to be cool (at a board game party, mind you), I downplay my affection for that big green box.

The strange thing is that in my immediate circle Power Grid has crossed a lot of boundaries. It’s been embraced by thinkers, trash-talkers, experienced gamers, and neophytes alike. I’ve known more than a few people who have been introduced into the hobby through it. So when I think about Power Grid, I find myself pondering why it’s such a success.

Power Grid was one of the earliest obsessions I had in board gaming, one that followed me through all of my gaming circles. It was one of those rare games that appealed to me instantly, where I knew right away that I HAD to buy a copy. I ended up getting it from my wife as a wedding present, which obviously gives it some sentimental value as well. But beyond that, I just find it to be enormously satisfying, on both a strategic level and a experiential one.

The premise is straightforward. Each player is tasked with hooking up a series of cities to provide them with electricity. The game is divided into a turns, where players auction off power plants that run on various kinds of fuel, like coal or oil. After buying fuel for your plants, you then connect cities to your grid and power them to make money. When someone has connected to a certain number of cities, the person who is able to provide the most cities with power (based on the capacities of their plants and the fuel they have on hand) wins the game.

A couple of mechanical touches are worth highlighting here. First of all, the fuel market has been justly celebrated as a great abstraction of supply-and-demand economics. Each individual fuel token is placed on a track with increasing numbers. The first person to buy a barrel of oil will pay less than the guy who is buying fifth or sixth, especially if numbers 2-4 are buying it as well. Each turn, new resources come to the market at a preset rate, but it’s easy to see a situation where the price keeps increasing because you are using more than is being produced. It’s a fascinating system because it can be manipulated, but also because Friese has built in a small observation about limited resources. He’s clearly got at least a little interest in the environmental impact of the race for energy. You can buy wind farms that give you power for nothing, and the coal and oil plants are depicted with smokestacks that belch fumes into the gray sky.

Another distinction in Power Grid is the draconian catch-up mechanism. The player in last place will buy their fuel and connect their cities first, which will save a lot of money. This is not a simulational consideration, but rather a design one. It’s clear that if it wasn’t there, you could call the leader about a third of the way through. It’s an artless solution to that problem, but in practice it becomes another element to manage. This is one of those things that will drive some people crazy, but it’s never bothered me much. It’s not like it allows bad players to win. Rather, it allows the game to absorb a little bad luck or extenuating circumstances. That it’s pretty gamey is unfortunate, but it’s a net positive.

Power Grid is often lumped into the broad category of Eurogames like Puerto Rico and Caylus, but it’s not an entirely accurate classification. It has a lot more in common with old-fashioned train games, especially the classic Empire Builder series. This isn’t just speculation either; Power Grid was originally released in German as a game called Funkenschlag. There were many mechanical similarities, but in Funkenschlag the routes were drawn in little crayons on the board, just like in Empire Builder. When Power Grid was released, (still called Funkenschlag in Germany) Friese made the wise decision to render these connections printed on the board. Perhaps the most impressive thing was that he was able to create a game that made such the genre highly accessible and pretty quick, without sacrificing much in the way of depth. And it makes sense mechanically too. Nothing feels bolted on or showy, and the entire thing feels much more thematic than the average Eurogame.

If that’s true, then why would anybody not like it? Because sometimes Power Grid feels just a little too much like bean-counting. Money is a constant factor, and it’s a running joke that you’re always exactly one dollar short of what you need. That invites a lot of analysis, and the game doesn’t do much to discourage it. It’s not that it’s necessary to compute everything to win. I am a very intuitive player, and I’ve won my share of games by knowing broad ideas of when to buy what and evaluating purchases without counting every buck. But it becomes a problem because those who DO math it all out will bog down the game for everyone else.  And in a broader sense, it’s just a patchy design. A lot of things feel like they were put in to keep the game from breaking, like the catch-up mechanism. There’s not a lot of finesse, and forgetting a minor rule, especially in the power plant auction, can make the whole game stop working until someone figures out what happened. Such temperamental design is unfortunate. The fact that the game needs to be resolved by the tie-breaker about half the time also feels a little weird.

Then why on earth does everyone love it so much? Because at its core, Power Grid does what Eurogames do best: it rewards good play. There are no cheap wins. The victor has earned it through good decisions. But it offers more than just a strategic reward. The challenges presented through the game are the result of the other players, not some phoney difficulty built into the design. It’s the sort of game you play with your head up. And because of the strong thematic tie-in, an experienced player can guide new people through it and show them the greatness. Along with Acquire, it’s one of my favorite games to introduce people to economic games. It understands the basic pleasure of being a tycoon.

I’m not being objective here. I know that it’s a number-crunching game, and I know that it’s mechanical clumsiness could have been sanded away. But Power Grid has been one of my constants, something that I’ve always enjoyed even when I moved on to killing orcs and space aliens in my games. Nostalgia won’t save lousy games, and Power Grid has shown it’s quality many times over. And I’ll be playing it for years to come, if for no other reason than I can shake a box and find four opponents at every game night.