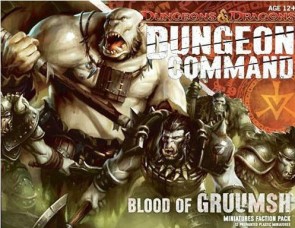 Game Name
Dungeon Command: Blood of Gruumsh
Publisher
Wizards of the Coast
There Will Be Games

Inconveniently Wizards of the Coast decided to release five sets for their modular miniatures game Dungeon Command, and I covered the first four in batches of two. So now we’re left with an odd one. However, the good people at WotC informed me this is the last release currently planned, so it seemed a good idea to cap the whole thing off with a series overview.

But first, the new set. It’s called Blood of Gruumsh which, for anyone passingly familiar with the Dungeons & Dragons multiverse in which the games belong, will signal orcs. For some reason the orcs in this box are a peculiar shade of blue-gray rather than the green which is universally assumed in other fantasy settings. But aside from that oddity they’re the best figures in any of the Dungeon Command sets: solid, detailed sculpts with pretty reasonable paint jobs.

Can I assume you’re familiar with the rules? Take a look at my coverage of the first two sets if you’re not, and not up to reading the rules online. In fact you might want to take a look anyway because sadly, after the notable improvements in the previous two releases, Blood of Gruumsh is a step backward, with the same issues as the first releases.

That’s not to say it’s bad. The orcs do what you’d expect: they hit things, and hit them hard. So hard in fact that a lot of the other factions have the potential to struggle in the face of the orcish onslaught. It’s possible that there may be a bit of power creep with this set, which is unfortunate but I guess that if we were being charitable we could say that it’s pretty impressive that they’ve managed to avoid that so far.

But the problem is that this is another combat-heavy set, much like the first two sets. And as I discussed there, combat cards are pretty much the least interesting thing about the game. So the orcs have much the same issue with piling on the cards until they run out, and then having to stick to the slightly dull predictive combat mechanic. Same goes with the variant cards for the adventure system games: the combat focus fails to sufficiently differentiate these new monsters from the existing ones.

What this does have over those initial sets though, is the benefit of another two sets in between. Which is to say that with all the models, cards and effects now already in the mix the designers have been able to include a lot more cards with the potential for interesting combinations when combined with those from other sets.

Which brings us nicely on to looking at the series as a whole. From the start it’s been pretty clear that this system was design and sold as a “miniature builder” where you could snaffle up all five sets and use the contents to make your own. It has an awful lot of potential when viewed through that lens: not only does it vastly increase the replayability of the game, but the ability to recombine anything at all - cards, figures, commanders, even board tiles - is actually pretty innovative.

So why on earth aren’t people doing it?

Of course that’s a generalisation. Some people are certainly doing it. But if you poke around the self-selecting slice of gaming represented by the internet it seems clear that people are mostly sticking to the sets as they stand. There’s certainly very little of the sort of feverish arms-races you see in other modular games as players struggle to keep one tactical step ahead of the pack.

I think there are two reasons for this. The first is that mixing it up simply feels wrong. The system is too steeped in the D&D official material, where you see orcs and goblins working together, but not Dark Elves or undead all tangled up with other factions. You’ll certainly never see the heroes of Cormyr fighting alongside wicked demi-humans in the free and easy manner that the system allows.

The second, and somewhat more daming reason is that the game isn’t quite exciting enough to encourage the depth of devotion required to sift through multitudes of effects and combinations to find synergies and build on them. It’s a lot of effort. And I get the feeling that most of the people who really love Dungeon Command are role-playing game devotees, who’d still rather spend their energies with their favoured hobby if they got the chance.

So where does that leave Dungeon Command? Well, it’s clear that while the system supports multiple players, it’s focussed on two. And it just so happens that I think two of the sets stand above the others in terms of fun and quality. Those are the wave 2 releases, Tyranny of Goblins and Curse of Undeath. I reckon the best way to experience Dungeon Command is to grab those two, forget the rest, and play it as a 2-player game.

And that’s a wrap for me. At least it is for now. Because although Wizards told me they had no more releases planned, they also told me the situation was fluid, and that that might change. And I hope it does - those two top-quality sets demonstrated there was, and is, potential in this system as long as there’s clever design to tease it out. And if they can encourage players to overcome the hurdles involved in creating their own warbands, the explosion is there, waiting to happen.