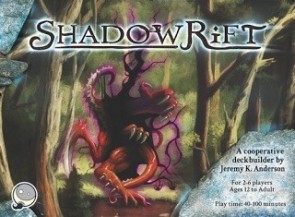 Game Name
Shadowrift
Publisher
Game Salute
Designer
Jeremy Anderson
There Will Be Games
I know deckbuilding games are a fad. I know people are getting tired of them. I know how many people love to say, , great, another deckbuilder, yawn.' They actually say that. Or type it, anyway. They type 'yawn' as its own sentence. So condescending. I hope those people break their pelvises in skiing accidents.

Because I don't care if deckbuilding is a fad, I think it's brilliant, and I love a good deckbuilding game. So when I read that Shadowrift was a cooperative deckbuilder with a fantasy theme where we team up to battle evil, I was quite excited. That sounds like a good time in a box.

It is not. It is not a good time at all. It is a bad game that disappointed me so severely that I most emphatically promise that I will never play it again, unless someone comes to my house and puts a gun to my head and promises to leave if I just play one more game of Shadowrift.

Possibly the reason I am so upset with Shadowrift is because the game had so much promise when I opened the box. There are a variety of hero powers you can buy, like magical attacks and healing and hitting things very hard. You should be able to create exactly the kind of hero you want, and specialize in different things to maximize your effectiveness every turn. But the abilities are kind of expensive, and we found that we could only afford one new ability per turn, on average, which meant only one of us got an upgrade while the rest of us got kicked in the teeth.

And then the monsters are ludicrous. Not because they're just absurd monsters - I mean, some of them are a little silly - but because they are crazy hard to beat. Here's some math:

You have ten cards in your starting deck.
Every time you hit a monster, you gain a wound card and do one damage.
The average monster has 4-6 life.

So what does that math mean? It means that you're gaining a wound card nearly every turn! Sometimes more! I drew a hand near the end of the game that contained nothing but wound cards. I had absolutely nothing positive to contribute because I had a deck that was about one-third wounds.

Now, you're probably saying, 'you just hated the game because it was too hard.' Well, bollocks to you, because we won. You win if you can seal all the shadowrifts or build all the walls, and it's not really very difficult to seal those rifts. You just have to wait until they come up in the monster deck and then seal them. The only hard part is staying alive long enough to do that.

I was very frustrated after our game of Shadowrift. I went back and read the rules again, to see if I had just screwed it all up. And I discovered that although the rules are not particularly well written, I had managed to do it mostly right. There was a good deal of confusion regarding how to calculate monster strength, but other than that, I managed to play the rules as they were written. So I can't chalk this one up to user error. I genuinely disliked Shadowrift, and it's not because I did it wrong, it's because the game blows goats.

Shadowrift isn't even all that original. If you had a cooperative-play version of Thunderstone, you would have Shadowrift. Except Thunderstone would have WAY better art, more thematic consistency, better rules, and enough testing to know that it would work. Hell, I almost want to go back and play Thunderstone now, just to get the taste of Shadowrift out of my mouth. And I don't even like Thunderstone (though I have not played the advanced version, which I understand is a huge improvement, and I would play it except I send all my Thunderstone expansions to my dad).

If the world were fair - and it is not - the creators of Shadowrift would pull it off the market and test it several hundred more times. They would do something about the confusing parts of the rules. They would hire new artists who would do a very good job, and replace all the abominable art that graces the game now. Then they would reprint the whole thing and send it to me again so I could see how much potential awesome was in this box. Because right now, Shadowrift is an unfinished disaster, and that makes me sad because the idea is bad-ass.

No players at all, if you're smart

Pros:
So much potential

Cons:
Utterly fails to live up to its potential
Confusing rules
Too much happening at once
Cluttered mess
Hideous art
Just not finished